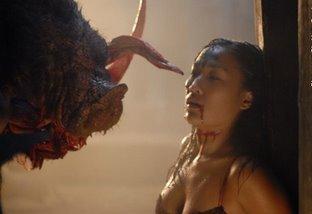 Hemp, hicks, hunters, hippies and hogs; this would be a reasonable tagline for the 2008 creature feature “Pig Hunt”. Alas the actual tag is “Get Muddy, Get Bloody, Kill or be Killed”, which is more in line with the film’s German title “Pig Hunt-Dreck, Blut, and Schweine”. The film was shot near my neck of the woods, specifically Boonville, California. And yes for those of you scoring at home that means that this movie about hillbillies was literally shot in the Boonies. In addition to its apropos location the filmmakers pulled a minor coup by getting local celebrity and anomalous bass meister Les Claypool to act in and contribute original music to their little trip into the backwoods. Add to the mix the director of “Skinwalkers” and your expectations might go from quirky blood-soaked woodland high jinx to a protracted trip down a flight of stairs with Claypool’s exaggerated, drawling vocal mockery echoing through 99 minutes of torment.

“Pig Hunt” begins with a panicked hunter meeting a tusky end and quickly moves us onto a protagonist roll call. The group is a feckless phalanx of four weekend sportsmen: John, Quincy, military reservist Ben, and Wayne. They are joined, to the chagrin of the Ben and Wayne by John’s girlfriend Brooks. This SUV of fools leaves the cozy squats of San Francisco for a boar hunting weekend on property owned by John’s Uncle (who is the hunter we saw killed at the outset). Quickly we learn that John has some demons in and around his ancestral hunting grounds. Two of these demons come calling in the form of old redneck shooting friends Jake and Ricky. The crass and cantankerous duo forges an uneasy alliance with John’s band of huntsmen in order to bag more boars, and with their inclusion the group morphs into a sort of continuum of testosterone that bears little chance of avoiding a violent dispute.

Just before the group is attacked by a battery of big baby boars Jake regales the others with the tale of a local 3,000lbs pig called the Ripper. John confutes the claim but as they press on into the dense timber the hunters find clues that something big and hungry is very close by. After the accidental discovery of a vast pot plantation, Ben shoots Ricky to protect John and Jake vows revenge. Shortly after the shooting the Ripper shows up and starts picking off the boar-stalkers, fortunately John and Brooks encounter a scimitar wielding hippie guru who promises them safe passage. As the hunters make their way out of the forest the hillbillies set out after them with vengeance burning off their moonshine buzz. Pigs, patchouli and pot converge and in a finale that sees John and Brooks facing down the Ripper in a muddy battle wit and will.

“Pig Hunt” has all the necessary components to be a scatterbrained mess. An overstuffed plot, a giant creature effect, and an ensemble cast of modeling agency talent are all points on the Scary Madison/ Platinum Dunes circuit diagram. This formula generally yields a specious, antiseptic procession of latter day boulevardiers slumming in Kryolan mud while expertly communicating the filmmakers’ snooty contempt for horror fans. I am happy to report that this big pig story only steps in such mud holes momentarily.

The most pleasantly surprising thing about the successes of “Pig Hunt” is that they are due to a capable directorial hand. With only three films in his helmer's canon I am gonna go out on a limb and say that this is the James Isaacs that gave us the unreasonably fun “Jason X” and not the one who rendered the werewolf dull-a-thon “Skinwalkers’. With “Pig Hunt” he generates a strong story trajectory and backs it up with an immersive off-kilter environment. Add to this the production’s devotion to high quality practical FX and creature design and a really energetic redneck rampage sequence and you have a movie with a lot life pumping through its porcine heart. У нас можно купить диплом официально.

Sadly, on the hoof, there is plenty to dislike about “Pig Hunt”, too. The cast is mostly a bunch of starchy headshots who never leave the written page long enough to even accidentally embody their characters. The dialog, especially the hick-speak is just plum awful, dadgummit. The bonds between the characters also suffer for the poor performances, leaving the audience to wonder how and why the friends became friends in the first place. The film is a mixed bag technically as well; good framing and solid, rhythmic editing stand cheek by jowl with amateurish conversation blocking, and cutting that too often refuses to employ a “kill your darlings” approach. The last significant complaint I have is around the film's war metaphor which has moments of symbiosis with the narrative but overall seems more muddled through than fleshed out to a satisfactory degree.

“Pig Hunt” may rub you the wrong way. It certainly isn’t a ground breaking film and it has the kind of problems that can alienate an audience that isn’t inclined to forgive shortcomings. On the other hand, the pitch-shifting of the story lines up well with Les Claypool’s soundtrack contributions to make this trip to the wilds of Boonville feel heterodoxical to most hillbilly inclusive horror romps. In my mind this makes it worth at least one pass through your DVD player, even if I still think I could write a better tagline.