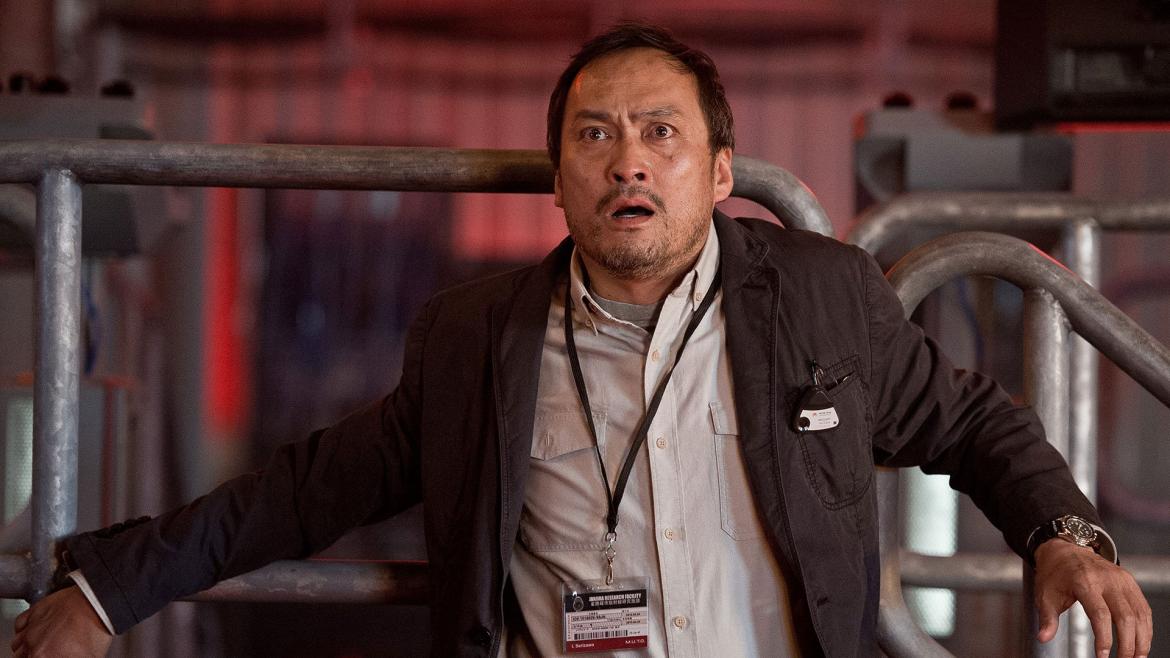 Over sixty years ago, Godzilla (1954) was born from Japan’s attempts to come to terms with the dual horrors of Hiroshima and Nagasaki. Those same atomic age fears still run strong in director Gareth Edwards and screenwriter Max Borenstein’s re-launch, Godzilla (2014). In their film, a nuclear power plant disaster, clearly reminiscent of the 2011 Fukushima Daiichi tragedy, helps feed the rise of a pair of giant, highly-destructive monsters. Before that even takes place, however, the true catalyst of the film’s events is shown to be mankind’s unquenchable thirst for natural resources. By digging deeper and deeper, we open the door for something capable of destroying us all.

The creatures in question are called MUTOs (Massive Unidentified Terrestrial Organisms), a husband-wife team of massive insect-like creatures which feed on energy and are looking to repopulate the planet with their kind, leaving little for the rest of us. Humans are powerless to stop the horror they’ve unleashed and so nature steps in, rousing Godzilla, a prehistoric alpha-predator, from the depths of the ocean to destroy the MUTOs and restore balance.

Witnessing all of this is a gaggle of humans led by Ford (Aaron Taylor Johnson), a bomb disposal expert for the US Army, his father Joe (Bryan Cranston), and Dr. Ishiro Serizawa (Ken Watanabe), a scientist who’s spent years studying the existence of Godzilla. In an interesting twist, these characters are placed at the forefront of the film, with the MUTOs getting the majority of the remaining screen time. Little is given to Godzilla and the fights between the three creatures until late in the film, a counterintuitive decision that pays off. Withholding the monsters in this way gives the movie a quirky humor, as fight scenes are interrupted at climactic moments or depicted solely via newsreel footage; and allows the third act’s final battle to truly shine.

Sadly, the humans aren’t really up to the task of carrying the film. Watanabe excels as a somber, philosophizing stand-in for the countless generations of Japanese scientists who’ve run up against Godzilla and his ilk over the years and films. Johnson, however, feels more like a passenger in the film than an active participant as he’s carried between gorgeously-shot set pieces by luck and narrative necessity. Cranston as well as Elizabeth Olsen, who plays Ford’s wife, are treated in much the same way.

A fresh take is no easy thing to find when your source material is six decades old and has spawned over thirty films. While Edwards and Borenstein’s take on the Godzilla franchise is not perfect, it certainly isn’t stale. Even more impressive? The duo managed to imbue the big, green, fire-breathing lizard with something he’s often lacked. Their Godzilla has an undeniable, vibrant presence. Every moment he’s onscreen – though there are precious few of them – he commands viewers’ attention like the unstoppable force of nature he was always meant to be.