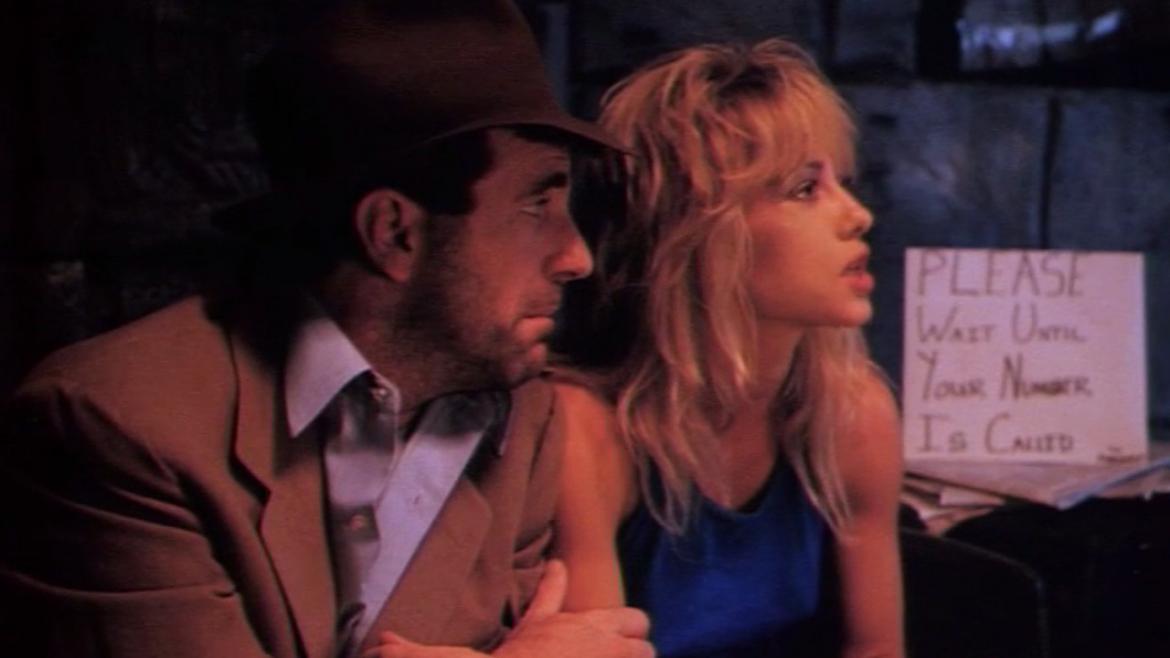 Every time the weather starts to get warm again, I get this sudden insatiable appetite for trashy horror flicks. Who knows what it is. Perhaps it's because the summer and cheesy horror films both make me nostalgic for my childhood, or perhaps it's just that I want to see a whole lot of breasts. Either way, I garnered some mild enjoyment out of "Hollywood Chainsaw Hookers", and let me tell you why.

"Hookers" is in many ways played up like a comedic film noir, complete with the gruff Private Eye who sits at his typewriter while he has internal monologues. While attempting to track down a missing girl (Quigley), he runs into a chainsaw wielding cult full of hookers, run (naturally) by Gunnar Hansen (doing the worse impression of an actor he can muster). For me, although the film is pretty campy, and fairly enjoyable, the funniest moments were the occasional witty lines that got spit out during the PI's monologues. One occasion shows him and his girlfriend (naked by the way) having a fight, while the voice over makes it sound like every thing's peachy. I guess you've got to see it to fully understand. A less subtle moment would have to be when he spit out one of my favorite lines, "Being a dick's a 24 hour a day job." It sure is folks, I can attest to that.

The real reason why I would assume most anyone would pick this up however, is probably for the mammary count in the film. And on that count, I have to say that HCH certainly doesn't disappoint. Hell, the introduction alone by director Fred Olen Ray (on the recent DVD release) displayed about 6 breasts that I counted... and even some naked ladies playing twister! In the breasticle department you get the surgically enhanced assets of Michelle Bauer, the perpetually perky teets of Linnea Quigley, and even a few unknown sets of knockers thrown in there for good measure.

Many of the scenes where the girls hack up unsuspecting John's play out like one of those cheesy Playboy videos. You know the ones (even if you won't admit it) where the girls dance around to some cheesy song while naked, but never get around to doing anything we really want to see? Ya, those videos. When they finally get around to killing people, I suppose they should get credit for at least trying. While there's only 1 visibly violent moment in the film, some Production Assistant must have had his hands full dousing these ladies in fake blood while they pretended to be chainsawing some unsuspecting fool. "A" for effort, "F" for effect.

Unfortunately, although I enjoyed the film, it also falls victim to the pitfalls that many similar movies do. Namely, it's not really a porn and it's not really a horror film, so the "blood and boobies" shtick gets old after about 40 minutes. Once you've seen each girl naked once, the subsequent times they get nude cease to be all that exciting (especially since I know every inch of Linnea Quigley's body at this point). Also, as I think back on my viewing experience, I recall almost falling asleep during the "exciting conclusion," and I don't suppose that can be a good sign about the film's quality.

"Hollywood Chainsaw Hookers" is low budget all the way. It's got Sparse sets, awful acting, beyond lame story lines, and an overabundance of boobs and blood trying to cover all that up. It's not always the most exciting flick, but does exude it's own unique charm, and it even made me laugh out loud a few times. If you're into this type of thing, this just may be one of those flicks for you to pick up.