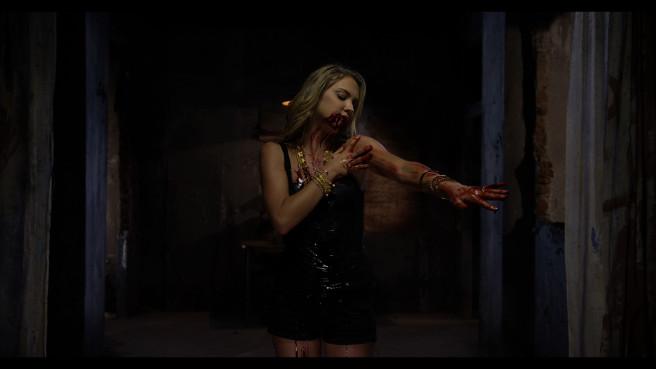 Americans in horror movies, especially young and attractive ones always seem to find themselves in a foreign land with little understanding of its culture or history – and this always ends badly for them.

In Pernicious, the case is no different. Three American beauties (Emily O’Brien, Ciara Hanna, and Jackie Moore) decide to make more of their lives than just their looks, and go to Thailand for the summer to teach English to local children. Upon arriving, one of the girls decides she sees a cool amulet in a ‘spirit house’ at the end of their drive way and stuffs it in her purse -this is the first of all their decisions that happen to be horrible ones. Inside, while getting settled, they come across a lifesize golden statue of a small girl. A bit unnerved and definitely confused as to why it is in the home – they ignore it. After going out in town to find a bar, the three girls return home with 3 booshy British guys looking for a bit more than a good time. However, the night doesn’t end in quite the same kind of fun the guys were expecting. The next morning, the girls are devastated to learn that they think they have been drugged and obviously robbed of all their gold jewelry and the gold statue that belongs to the house. Angered – they set out to find the guys and get their belongings back.  Along the way, the girls ask about the statue in the market and are lead into the forest by a little girl to a creepy old witch lady who tells them the story of the statue and its curse. Ignoring the warning, the girls return home and meet the vengeful, violent spirit head on.

With a simple yet thoroughly effective premise and lots of over the top gore, Pernicious is a solid J-horror inspired romp. The film dives into the deep end with obvious influences of the revenge driven spirit aspect of films like Ju-On with the brutality and American nativity of Turistas. Actually filmed on location in Thailand, the scenery and influences are incredible-and often help the less than interesting performances. The special effects and gore are both spot on and definitely stomach churning.  Though not especially impressive, the film does a good job of combining several different types of horror with an interesting historical and local legend. Also, there are attractive girls (both blonde and brunette) in their underwear covered in blood. Guess there’s a little something for everyone if you stumble upon it.