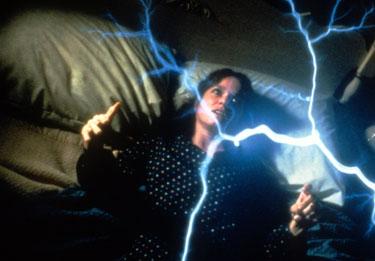 When I was 10 years old I saw an episode of “Sneak Previews” in which Gene Siskel and Roger Ebert lambasted the film “The Entity” starring Barbara Hershey. Though I don’t remember the exact thrust of their criticism it did center on the moral dubiousness of a horror film portraying the repeated rape of a woman by a ghost. Their condemnation was matched immediately by my mother’s proclamation “You will NEVER see that movie.” As a boy approaching adolescence all this hullabaloo made certain that the title would stick in my mind for years to come. I did finally see the film in the mid-eighties but only managed to mirror the same outrage that Siskel, Ebert and my mom found in the film’s premise. Those borrowed interpretations dominated my thinking about the movie until late last night when I finally sat down and tackled “The Entity” on more open terms.

“The Entity” is based on true events and tells the story of Carla Moran a single mother of three who is trying to make ends meet while raising her kids and going to night school. Carla returns home one night after school spends time with her kids then heads to her room to prepare for bed. Moments later she is brutally attacked, raped and bloodied by am invisible assailant. Her kids are terrified and she takes the whole family to a friend’s house for the night. Her friend suggests that she seek out help at the university psychiatry clinic.

Carla decides against that option and shortly there after she is attacked while driving and raped again in her bathroom. This time she opts for a session at the clinic with Dr. Phil Sneiderman. Carla shows him the bruises she got from the attack and the doctor puts her through a series of tests to help assess her mental state. For a time, treating her problem as a psychological malady seems to comfort Carla but when she is attacked again, this time in front of her children, she decides to call on the parapsychology department for help.

Sneiderman rails against this partnership but the group sets up shop in Carla’s, house and tries to gather evidence of the paranormal phenomena afflicting the family. Carla’s boyfriend returns from the road in time to witness her being ravaged by the spirit. He quickly decides to jumps ship. Desperate for help, Carla allows the parapsychology team to try a risky capture experiment in order to rid her of the poltergeist for good.

It turns out my mom was right to prohibit my viewing, though maybe not solely for reasons of violent sexual content. “The Entity” is a puzzling and challenging film. The film lays out strange insinuations around the causality of the events. It also has some incredible passages of brain-grinding tension. These factors in combination with a slow reveal around its core morality and there is little question that this film would have taken a sledgehammer to my gently blossoming consciousness when I was 10 years old.

Through the first two acts one could make a strong argument that the film traffics in puritanical value judgments that seem to forward misogynistic conclusions about Carla’s plight. Fortunately by the final frame much of the ugly circumstances of her history have been downplayed and even undermined as plausible explanations for the haunting. The film does take aim at the reckless ineptitude and opportunism of those who sign on to help Carla Moran. This is a worthy subplot largely because at least one of these people has a character arc that rivals Carla’s in depth of portrayal. Ron Silver as Dr. Sneiderman is drawn as both a pompous academic and a principled crusader who wants to end Carla’s suffering. The director’s willingness to spend time on Sneiderman’s contradictions and allow him a transformative path is a small touch that speaks volumes about the care taken to tell a good story.

Barbara Hershey is excellent in the lead role of Carla Moran. Hershey manages to reflect all of the bewilderment and trust of an unassuming person trying to deal with extraordinary circumstances. Her early passivity maybe infuriating for some viewers but when her character arc breaks the show of strength jibes well with her experiences and personality.

The most complicating element in reading the filmmaker’s intent is the exploitative content. For most of the film the attacks are harrowing and brutal without being graphic. Whether or not the construction makes sense we do move from this implied rape to the aggressive groping of a completely naked, terrified and paralyzed woman. The early rapes feel barbaric and scary; the last instance feels more like cheap shock. Perhaps it is just a tonal mistake but it does cast a little doubt on some of the filmmakers' motivations.

While “The Entity” may be exploitative and abstruse; it is also technically brilliant. The film has so many elements that are almost extinct in modern horror that, were it released today, it would certainly be an instant classic. For example even though the characters have a fair measure of cliché to them they do evolve and the audience is invested in their struggle. Some of them work against expectation and all of them seem well motivated. The cinematography is breathtaking in spots and the FX work stands up really well for a film that is nearly 3 decades old. Add to this outstanding editing and shot selection and you have movie that has aged exceptionally.

"The Entity" forwards a less than definitive voice on most of the events and doesn’t seem to mind taking dramatic license with the root story of real-life haunting victim Doris Bither. But the craft here is too great to be denied and the mystery of the motivations of both people and ghosts add to the horror. In the final assessment this ambiguity and the insane peaks of tension are what will stick with the viewer. Even at the ripe age of 29 “The Entity” has few equals in anxiety and creep factor.