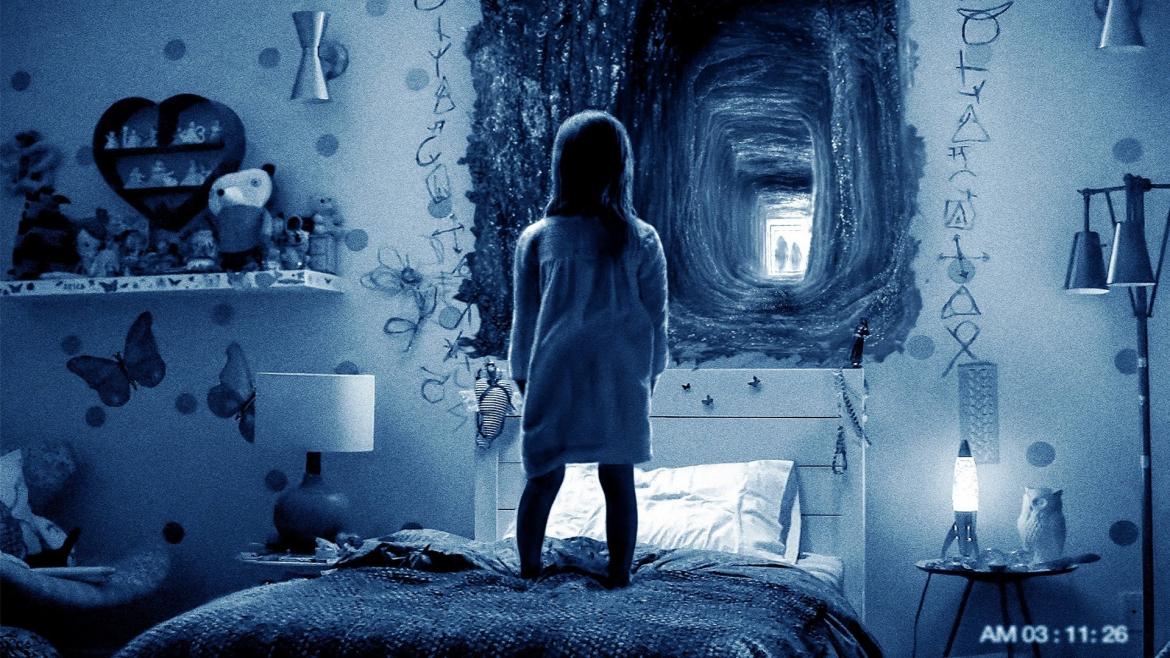 Here it is...the moment fans and haters alike have all been waiting for- the end of the Paranormal Activity franchise. Or so the advertising will have you believe. Longtime fans have been promised the ability to see the activity and finally see Toby in all his glory, while haters just want the franchise's shtick to be put to death. After Paranormal Activity: The Ghost Dimension that line between fan and hater may become even more blurred.

Taking place 25 years (the year 2013) after the events of Paranormal Activity 3, Ryan (Chris Murray), his wife Emily (Brit Shaw), and their six year old daughter Leila (Ivy George) have moved into a new home. Ryan's and his brother, Mike (Dan Gill), discover a box with a funky camera and dusty VHS tapes featuring footage of young Katie in a weird trance state. As it turns out the camera has the ability to see what can't be seen with the naked eye, and through the tapes Ryan discovers the deep doo doo that he and his family just stepped in. Leila quickly begins exhibiting odd behavior and talking to an invisible friend named Toby. Realizing with the help of the special camera they are dealing with something sinister Ryan and Emily look to avoid their daughter fulfilling the prophecy foretold by the tapes.

We've got to have a talk guys and gals. The talk is about closure. The thing you're supposed to feel or want to have when something ends. In the case of a movie franchise, you've committed a lot of hours to seeing this thing through to the end so it's only natural to look forward to having a sense of how it all ends. Gregory Plotkin does not give a damn about what you or anyone who has stuck with this series wants- nor does the small army of writers credited for this disaster. It's entirely possible based on this film that no one involved with its production really understands what people liked about this series, knows the basics of rational human behavior, and have copied every found footage trope you've ever seen since the beginning of time. Closure my friends, is pipe dream that Plotkin & friends have set out to crush at every turn.

The script- if there even was one- seems to have been constructed based on the burned up remains of the Cliffs Notes someone scribbled on a napkin of what has happened in the series thus far. Familiar names/faces are alluded to, but don't worry, the writers don't really think that's important. What's important is how freaking cool it's going to be to finally see Toby- or at least the floating Rorshach test that he appears to be. To the film's credit, his form shifts as the movie goes on and his image becomes more pronounced, but when the ultimate moment comes (approximately an hour and twenty minutes in) it's kind of like seeing what Pac Man's death noises sound like. The magnificently tense and chaotically paced final ten minutes are and almost completely ruined by terrible CGI and the worst final seconds of a found footage movie since The Devil Inside.

To add insult to injury, Toby just isn't scary anymore. Floating black ink is weird no doubt, but it sure isn't scary. Audiences will still find themselves scanning the screen wondering when/where the scare is coming from even with the black ink lurking in frame. Then of course there's the introduction of a brand new family that's impossible to care about outside of little Leila and that's only cause it's sad to see a cute innocent child being lured and manipulated by a demon summoned by a cult of witches.

As we let the dust settle, if Paranormal Activity: The Ghost Dimension were billed as just another sequel as opposed to a grand finale it would just be yet another in a growing line of disappointing installments. As a final film, it's like the filmmakers are treating fans like a naughty pet by shoving our faces in the crap that the franchise has become. Let's just hope we all learn from our mistake.