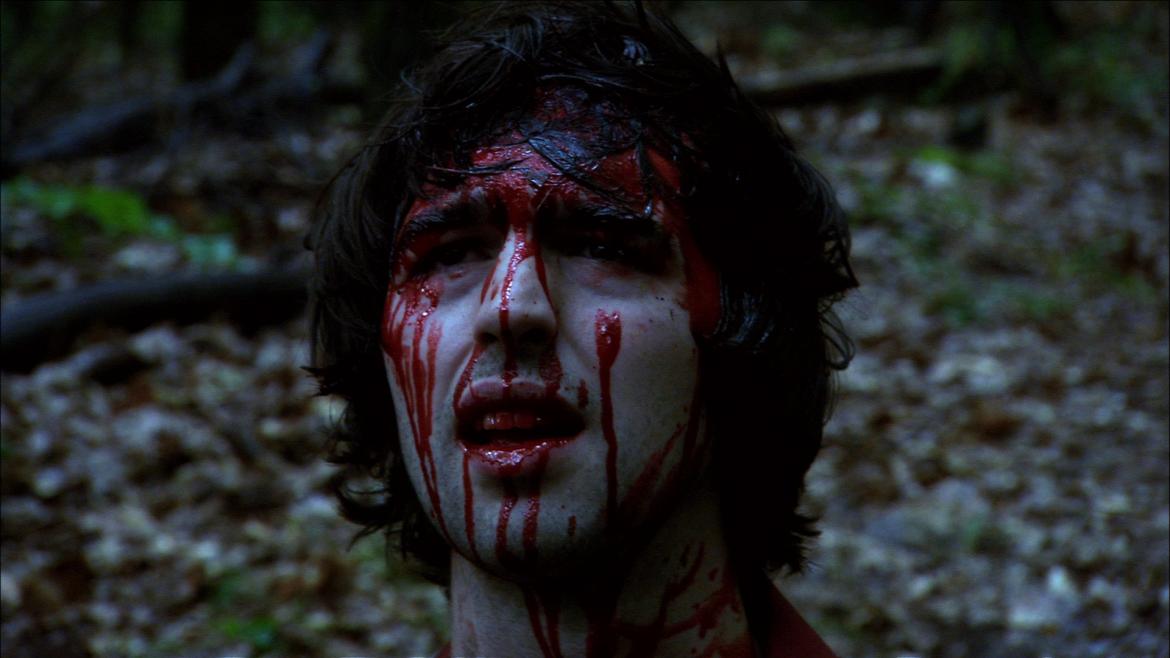 Horror movies be damned, there's plenty of reasons to not go in the woods for mundane reasons. Mosquitos will show you no mercy, and leave you an itchy, aggravated mess with lumpy arms, legs and neck. Odds are when you stop to heed nature's call you'll squat over poison oak. Stopping to eat some berries could leave you poisoned and gasping your last breaths miles away from civilization while folded in a fetal position, clutching your stomach and grimacing with indescribable agony. You could get hopelessly lost, never finding your way out and made the subject of a mediocre “based on true events” straight to video found footage horror film. Point being, there's no reason to assume that just because a film is titled “Don't Go In The Woods” that it's a horror film, let alone a slasher/musical hybrid. It could just as well be a Sunday morning infomercial touting the virtues of taking family holiday catching rays at the beach or screaming one's head off on the loop-de-loop at Wally World.

If the film were either of those things, it would be more entertaining than this hybrid film that is just short of awful.

The set up is basic. A young band led by their pouty, mercurial lead singer Nick (Matt Sbeglia) head out to the woods in order to write their masterpiece album that will set filesharing download records while the band serves fries in obscurity (I'm projecting here). The no nonsense, distraction free weekend long jam session gets tossed by the wayside when their girlfriends show up unannounced. This sets off the lead singer, who is quickly veering away from petulant towards unhinged, and in hissy fit he smashes everyone's smart phone. This act is one hundred times less badass than smashing guitars. Soon afterwards band members and girlfriends end up getting slashed or hacked to pieces from an unknown assailant in the woods.

The idea of a musical with a slasher film plot is certainly novel, but for it to work, two things need to happen. First, the songs should be catchy and germane to the plot. “Don't Go In the Woods” provides fey, weak soft rock tunes that would make musical travesties like Nickelback cringe with disgust. Most of the tunes bear no relation to what's happening on screen. You're simply left watching a very mediocre band kick out the jams on an awful album (though there's one catchy jam about an hour in when the blind bass player takes over vocal duties). It's as if the D'Onofrio wanted a two-for-one by having his actors band out the soundtrack as well.

This would be tolerable if the second half of the equation-the slasher kills-were in any way shape or form memorable. The “killer” sports a nifty look-think The Question mixed with a turn of the 20th century dapper British gentleman, but the bulk of violence occurs off screen via quick cutaways. Aside from the promise of seeing some boobs, the sole allure of the slasher film is the crowd pleasing kills where kids are torn up in graphic fashion right before our very eyes. Budget doesn't even have to come into play as one can pick up a five gallon drum of Karo syrup for the cost of an extra value meal at McDonalds. “Don't Go In The Woods” delivers one terrific sequence that almost makes the film worth a watch. When one of the girls tagging along witnesses her girlfriend get slaughtered, she tears ass back to camp to warn the others. Of course, being that she only speaks French, no one has any idea what she's freaking out over until she takes a sledgehammer to the back of the skull. This kicks off a fairly entertaining last ten minutes minus an especially bad acoustic number from our erstwhile lead singer.

Speaking of the devil, the film goes out of its way to set him up as unhinged and a possible suspect. He does resemble Elijah Wood quite a bit. Except when you watch the trailer for the upcoming “Maniac” reboot, you remember that Wood can be scary as hell whereas every time Sbeglia does his bug eyed routine he just looks like he's clenching in a turtle head.

The only other thing to note about “Don't Go In the Woods” is it was written and directed by Vincent D'Onofrio who appears on your television roughly six hours a day in Law and Order reruns. I guess he needs something to do with the bucket loads of syndication checks he cashes, so making mediocre horror films as a tax shelter is as good a gig as any. Aside from the thin novelty of a television star helming a gory musical, there's little reason to give the film a spin when you can pop in any number of slasher films you've seen a hundred times over for a far more entertaining experience.