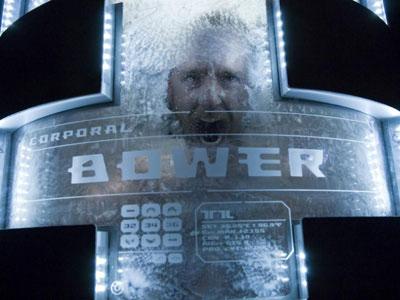 It's been quite an interesting summer for science fiction films. "District 9" and "Star Trek" were both critical and financial success for distinct reasons, and left sci-fi fans satisfied. That satisfaction has allowed "Pandorum", a film made specifically with that segment of the audience in mind, to slip under the radar, especially in a season packed with genre related films. For some, that is a shame.

"Pandorum" is set in the far-off future, on a gigantic ship wrought with technical problems. Those technical problems cause past crew members Payton (Dennis Quaid) and Bower (Ben Foster) to awaken from a forced, centuries long sleep. Mutually, they struggle to regain their composure and unite in the common purpose of restarting the ships reactor in order to escape from their current predicament. As Bower begins to work his way to the reactor while Payton stays at the controls, it becomes apparent that there's another form of life inhabiting the ship, one that's grotesque, violent, and very, very hungry.

The first act of the film is surprisingly tense, as you find yourself trying to acclimate yourself to the surroundings in the same way that Bower is. By keeping the monsters obscured and undeniably dangerous, director Christian Alvart has us peering around corners for fear that something is just waiting to tear us apart, something which becomes less and less pressing once the monsters are revealed.

Much of the lessening of tension throughout the film can be attributed to the introduction of Nadia (Antje Traue) and Mahn (Cung Lee), a pair of nomad rivals that despite their humble and peaceful former occupations, have now morphed into dirty, sexy, ass kicking martial artists. They are so odd in this world, that it seems like they were liberally plucked from a "Doomsday" or a "Mad Max" post-apocalytpic universe. This is just one of many examples where "Pandorum" represents a veritable Noah's Arc of genre conventions, which includes monsters that seem to have risen from "The Descent" and set pieces that may or may not have been teleported from "Alien(s)". Calling a film derivative isn't necessarily the highest praise, but it's also not the worst insult. While the mish-mash of obvious nods doesn't make "Pandorum" the best film, it does make it really entertaining in parts.

Although it borrows quite a bit, "Pandorum" has it's shining moments, thanks in part to a number of unique set pieces that range from pristine and beautiful to downright disgusting. There's something to be said about a film that can awe the audience with the luminescence of an immaculate biology lab, and later disgust them as Bower, covered in monster slime, crawls through an endless pile of the slumbering abominations. Especially in the closing moments, it becomes clear that these settings account for many of the strongest points of the film. With so much talk about the size of the ship, it leads one to wonder what sort of visual treasures we didn't see.

"Pandorum" opens a lot of doors throughout it's running time, and attempts to close all of them in the third act with varying degrees of success. For one, the origin of the monsters eventually explained, but it takes a lot of deduction to fill in the holes left by the exposition. Also, the treatment of the Payton character requires a substantial leap of faith, which isn't helped by Quaid's odd performance in the film's final moments. None of these loose ends ruin the film, but the way that some of them are blown-off leaves a lot to be desired.

"Pandorum" doesn't do a single thing poorly enough to make it unwatchable or un-enjoyable, nor does it do anything well enough to surpass the quality of the established films that it borrows from. Despite that, the undeniable beauty of the film's closing moments represent the fact that despite its flaws, "Pandorum" can be a very satisfying film for die hard genre fans.