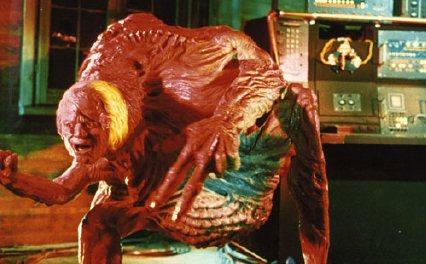 From Beyond (Movie Review)

I’ve watched enough film adaptations of HP Lovecraft’s work to know not to expect much from them. Sure, every now and then something like “Re-Animator” or “The Dunwich Horror” comes along that manages to be a solid, watchable movie, but far more often than not Lovecraft adaptations are painful messes. I’ve walked past the DVD box for “From Beyond” dozens of times in my life and have always passed on it for the same reasons I pass on so many Lovecraft adaptations. The box art looked like a straight-to-DVD cash grab, it had Jeffrey Combs in it (and really, outside of “Re-Animator”, what else has he been in that’s worth watching) and HP Lovecraft’s name was larger than the directors, signaling some obvious fan service. Now if I would have looked closely, I would have noticed that “From Beyond” was made in 1986 and not during the Lovecraft cash-in craze of the past decade, and that the director’s name was Stuart Gordon, who successfully directed Jeffery Combs in one of the few Lovecraft films worth a damn, “Re-Animator”. In short, I’ve been burned by so many terrible Lovecraft films that I had erroneously been avoiding one of the best. I’m happy I’ve finally remedied that problem.

“From Beyond” is based upon the short story by the same name and, for the most part, follows the plot pretty closely to begin with. Combs plays Crawford Tillinghast, the assistant to Dr. Pretorious, an unhinged scientist obsessed with unlocking the secrets of the third eye. Together, the two create a resonator that stimulates the pineal gland, which they believe to be key to unlocking the entirety of human experience. Turns out that they were correct, however this third eye is able to see all sorts of things you’d rather not know exist, namely, the dozens of nameless, faceless, eldritch horrors that float around in the ether between dimensions. The real problem? That those same creatures can see them.

Much like in the novel, one of these creatures kills Dr. Pretorious, prompting Tillinghast to be institutionalized. Where this is where the novel ends, this is how the film begins. Tillinghast is then released on bond to a psychologist who, together with a detective (played by Ken Foree), go back to the house to investigate Tillinghast’s story. From there, they discover Pretorious’ sex dungeon and replicate the effects of the first experiment (without the decapitation) but begin to notice strange sexual side effects from exposure to the resonator. Side note: there is no way to write that sentence without it sounding like the resonator is a giant vibrator.

It’s an ingenious move on Gordon’s part to flesh out the story with this, and is why the film ultimately succeeds. The biggest challenge in adapting any Lovecraft story to the screen is truly capturing the “nameless terror” central to every good Lovecraft story. Try as they might, no film-maker has so far been able to capture that feeling as well as Lovecraft has been able to write it. Gordon sidesteps this problem by dropping it almost entirely and reframing it in a way that’s recognizable and relatable to just about anyone. While not everyone has an experience dealing with BDSM or kink, they can relate to some sort of pursuit of physical pleasure that’s ultimately self-destructive, be that related to over-eating, alcoholism or other chemical dependency.

And if that higher level, Freudian stuff isn’t up your alley, “From Beyond” also works as a damn good B-movie. It’s filled with that ’80’s cheese that I love so much, filled to the brim with oozy practical effects and has plenty of cheesy, laugh-out-loud moments. That’s not to say that it’s perfect, however. The fourth act takes the action out of the house and into a psych ward and feels out of place. Worse, it derails the action just as things start to hit their clip and really get good. Jeffrey Combs also begins his descent into hammy over-acting partway through “From Beyond”, with some scenes becoming real groaners as he attempts to dominate and take over everything.

Still, these are pretty minor gripes given how strong the rest of “From Beyond” is. It’s one of those rare films that manages to both work on a metaphorical level and as pure entertainment. By translating Lovecraft’s brand of horror into real-world terms, Gordon manages to once again strike gold with a subject that is frequently a minefield of unwatchably awful films. Now if only the directors still churning out Lovecraftian crap would figure it out and do the same.