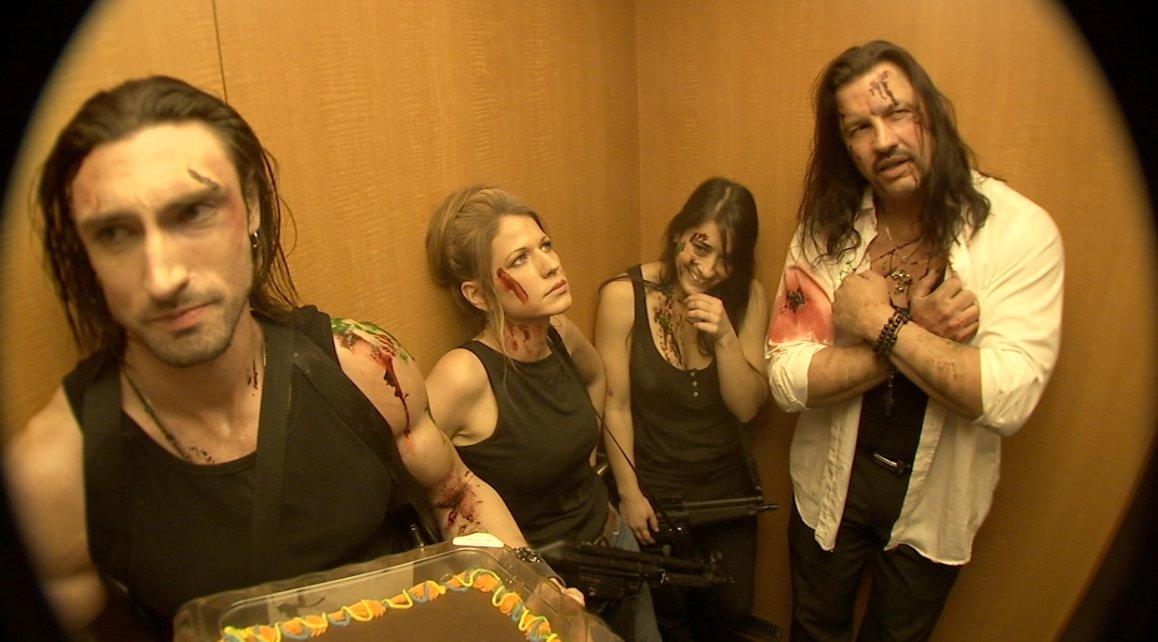 “Overtime,” the first major release by directors Brian Cunningham and Matt Niehoff (written by them as well), is the kind of film you don’t want to think too much about while you’re watching. Trust me on this one. If you start thinking about it, questions will start to bubble up into your mind, like:

“Why is there a cache of assault rifles in a pharmaceutical lab?”
“Who hires a homeless guy to be a clown for a kid’s party?”

And just like that, your enjoyment level of the movie will decrease; you’ll just start seeing all the plot holes and the scenes added in to pad the film’s runtime. Do yourself a favor and turn the logical part of your brain off for this one. If you sit back and enjoy the ride, there’s a lot to like about “Overtime.”

The movie stars former ECW and WWE wrestler Al Snow as Raph. He and his partner Max (played by John Wells) are… well, what are they exactly? Hit men? I wasn’t really sure, but they work for a defense attorney who frees alleged criminals and then has Raph and Max go kill them. The attorney assigns our two protagonists to work on a Saturday, something about finding a drug dealer at a pharmaceutical lab. They go, but didn’t figure they’d run into an alien virus that’s turned most of the staff there into flesh eating zombies (and there were a lot of zombies--who knew so many people in labs didn’t get their weekends off?).

I figured the action would really kick in at the lab, and I wasn’t wrong. However before we get there, we see Raph and Max head to Raph’s house to visit his family. It’s his son’s birthday, and he has a long list of chores to finish—hiring a clown, buying a present, and returning home in time. Can he and Max save the world and keep his wife from yelling at him for being late?

Assuming you are able to follow my advice and turn your brain off during “Overtime,” you’ll probably find it’s a lot of fun. The actors range from average to downright robotic, but the camaraderie between them was good. It looks like the cast and crew had a great time filming this movie, and sometimes with a low-budget movie that goes a long way. Cunningham and Niehoff pad the movie with some funny lines, and it’s clear they have seen their share of zombie movies. They play off some of the common genre themes without getting repetitive or cliché. Чтобы отыскать авторитетное казино с выводом на карту , можно воспользоваться рейтинговыми списками надежных гемблинг клубов, которые регулярно публикуются на тематических сайтах или форумах. Игроки смогут в них свободно выбрать доступный азартный сервис, с поддержкой расчетных операций через определенный вид платежных банковских карточек.

Unfortunately, there was one issue I couldn’t get over with “Overtime,” no matter how much I tried to shut off my brain. This movie is listed at 80 minutes, however maybe only 30 of them actually had Raph and Max in the lab fighting zombies. The rest of the movie had them going to Raph’s house, Raph arguing with his wife, Max playing video games with Raph’s son, the two of them using a car wash as a shower, changing clothes, buying clown makeup… you get the idea. There's some funny stuff there, but you have to sit through a lot of scenes that seemed like they were about twice as long as they should have been. Why not have more action scenes in the lab against the zombies? That is what we want to see, isn't it?