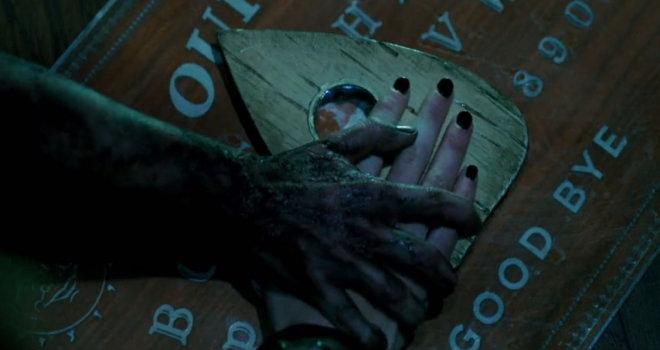 In case it’s not patently obvious yet, Hollywood is going to continue to churn out remakes and microwaved plots as long as people willing to shell out cash to see them. In this case it's Ouija, which, for anyone counting, has essentially been delivered to audiences in some form ten times over now. Happy anniversary, I guess? At the helm this go-‘round is first-timer Stiles White, a longtime writer who also penned Knowing, The Possession and Boogeyman with his writing partner Juliet Snowden. Hasbro (yes, you read that right – the company that makes and sells actual Ouija boards), Platinum Dunes (Michael Bay’s monstrosity of a company) and Blumhouse (Insidious, Purge, the majority recent above-board horror fare) all co-produced the film - so take that mixed company however you may.

After her best friend Debbie (Shelley Hennig- Teen Wolf, The Secret Circle), mysteriously withdraws from her friend group and ultimately hangs herself with decorative string lights, Laine (Olivia Cooke - Bates Motel, The Quiet Ones, The Signal) cannot cope with the abrupt ending of their friendship. Determined to find closure and understand Debbie's motives, Laine enlists her friends – who include her sister, her boyfriend, Debbie’s boyfriend, and mutual friend Isabelle. Spurred by the mention of an Ouija board the last time she and Debbie spoke, Laine decides this spirit board is the only way to reach the dearly departed. Though well aware of the rules in which the game must be played, the group sets out to summon Debbie in her own home. As the game progresses, the group makes contact with someone who, for whatever reason, they automatically assume is Debbie, as if she’s the only spirit that could possibly be lingering around. They say a few condolences and ask empty questions before Laine eventually signs off with "Good Bye." An uneasy feeling and the mysterious words (“Hi Friend”) loom over the group the next day. Terrified that they have missed something Debbie is trying to explain to them, the group is once again coerced by Laine into another round at the board. This time, though, they realize that their new “friend” is definitely not Debbie. As the group is chased out of the house and stalked throughout their daily lives, Laine becomes determined to do anything it takes to save her remaining friends.

Despite the fact that the film’s premise is about the thinnest a human being could actually imagine and that, yes, it is actually inspired by a board game … it’s somehow still not altogether a loss. The actors are stiff and shallow, lacking chemistry or any semblance of dimension, but that’s a flaw mostly rendered null by commanding atmosphere.  The jump scares are hypersaturated, which sounds bad but is a welcome departure from the stubborn refusal to employ them by too many of the film’s contemporaries. To boot, the jumps are fairly well-executed and keep the environment tense. A few of the typical horror movie tropes are loosely explored and the twist from one of those is an interesting surprise. Though the beginning of the movie seemed to build too slowly and, like so many others, succumbed to a failed third act, the middle of the film is relatively fun and engaging. There are nods to several classics and the film’s overall feel nears spiritual kinship to the “Wan-iverse” (including a terrific cameo from Lin Shaye, which, if nothing else, almost confuses that issue, begging the question if this film is somehow related to any of the others in that world).

In all, Ouija is an example of “from no expectations come the greatest rewards.” It may not be remembered come next Halloween, but much to much surprise; it’s decent enough fare for the 2014 spook season.