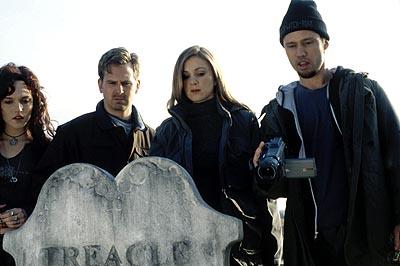 Going back and visiting "Book of Shadows" for the first time is something that I've wanted to do for a while. When films are hyped up as much as this one was I tend to stay away, and I've found that it's much easier to gain a level headed understanding of these films years later than upon their original release. My only question after watching it is, why does this movie get hated on so much?

The plot is simple, and at the same time incredibly complicated. Through some "Blair Witch 1" type footage in the beginning we learn that Burkitsville Maryland has turned into a major tourist destination for would-be goths and horror fans since the release of the original film. Understandably it's not something that the town is particularly crazy about. After the credits we're introduced to a group of 5 people, all there to partake in a "Hunt the Blair Witch" tour, camping out in the very same woods where the original was filmed. The tour is led by Jeff, who through flashbacks is revealed to have spent some years during his teens in a mental institution. He's a bit of a paranoid freak, and seems to have major trust issues.

He's accompanied by two friends, Erica (played by Erica Leerhsen) and Kim (played by Kim Diamond). Erica somehow manages to be the most annoying and most likable character all at the same time. She grates on the nerves because of her one note personality. She's a Wiccan (which is a pretentious name for a witch), and she's more than a little upset by the image that "The Blair Witch" has given to her kind. She spends most of the first half of the film bitching about this over and over. Plus, I've seen Wiccans and trust me when I say they don't look anything like Erica Leerhsen.

Although the character is annoying, Leerhsen is smoking hot and spends most of the film in some state of undress... what can I say, I'm pretty easy. The character of Kim is an obvious goth stereotype who spends most of her time bitching and drinking beer, but much like Erica still manages to be likable. The group is rounded out by a husband and wife (Stephen and Tristen) who are working on a book about the whole phenomenon and exploring the possibility of mass hysteria playing a part. Tristen is about 6 weeks pregnant, and is having a disagreement with Stephen about whether or not they are going to keep the baby.

The campers proceed to the spot where Rustin Parr's house used to stand. They set up camp in the old foundation and begin to get hammered while sitting around the fire. They continue on this way until around 1:30am, when everyone seems to black out. They wake up in the morning in a surreal shower of shredded paper, which happens to be all of the research that Stephen and Tristen have been collecting for their book. This is when things get interesting. As it turns out, a group of 5 hikers were killed near by that night as well, and as the movie progresses our main characters seem more and more likely to be the main suspects. There are more twists and turns that follow than I care to recount, but I'm going to skip straight to the heart of the matter.

"Book of Shadows" is an incredibly daring film that does the unthinkable. It attempts to follow an absurdly successful independent film lauded by some to be the most creative motion picture ever made, by making almost the exact opposite movie. Everything we learn in "Book" is through weird flashbacks, flash-forwards and surreal visions that all of the characters continually experience. Most of the 2nd half of the movie takes place in an abandoned factory (Jeff's home), where the group tries their best to piece together exactly what happened. The visions and hallucinations that the group has become increasingly creepy and surprisingly erotic. Although I can't really say that I was "frightened" by "Book of Shadows," by the time it was over there was a palpable feeling of uneasiness that had set in.

Joe Berlinger (taking over for Daniel Myrick and Ed Sanchez) makes a valiant and mostly successful attempt to be somewhat self aware of the original. There is much discussion between the characters here of the difference between reality and the things that our minds create. As one character says, "film lies, but video never does." Ultimately in the end it's this universal truth that turns out to be the downfall of these four, as they gradually learn that they had more to do with the murders than they'd like to believe. The film builds to an eerie crescendo, and in what is probably the only real fault I can see, leaves the audience hanging a bit too much at the end. I didn't need to be spoon-fed the ending, but I didn't feel like I was given enough either.

Difficult endings aside (and this film is best summed up as being "difficult") "Book of Shadows: Blair Witch 2" is an incredibly cool movie. It's vexing, sexy, super creepy and intensely original. I suppose I can understand why people didn't like it when it came out, but it's been a long time folks and it's time to give this one another shot. If it's one thing I'm all about, it's setting my expectations at the door and getting over hype, because in the sands of time it's the one thing that always gets washed away.