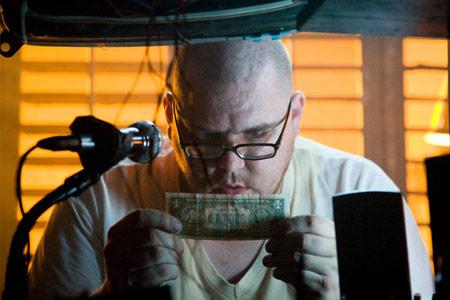 There's really nothing worse than a comedy that doesn't deliver. It's a black or white issue -- either it's funny, or it isn't. Tony Krantz's highly unbalanced 2008 horror/comedy "Otis" certainly tries to be humorous -- after all, Illeana Douglas, Kevin Pollack, and Daniel Stern are members of the cast -- but Erik Jendressen and Thomas Schnaus' schizophrenic script and some puzzling shifts in tone prevent this otherwise amusing premise from becoming nothing more than an interesting albeit extremely boring way to extinguish 90 minutes of your life. I can actually count the number of chuckles elicited on one misshapen paw.

Then again, your own personal enjoyment of "Otis" depends greatly on your sense of humor. A large portion of the jokes contained within are so impossibly dry you'll probably need several glasses of water to choke them down. The rest of the scheduled guffaws, I'm afraid, are painfully obvious, the sort of half-baked debris you're likely to find settling at the bottom of abandoned sitcom pilots produced during the mid-90's. A troubled serial killer who moonlights as a pizza delivery driver? I'm guessing that's supposed to be funny in and of itself, though it just seems like a goofy gimmick used to prop up a film that can't stand on its own ambitious legs.

Bostin Christopher stars as Otis, a grossly pathetic loser who lives a very lonely, very isolated life with his repulsively abusive brother Elmo (Kevin Pollack). Because he harbors some deep, unchecked resentment towards beautiful high school girls, Otis kidnaps various teens of the female persuasion and subjects them to an assortment of peculiar tortures which always seem to result in said captive‘s untimely demise. However, when this wholly unlikable nitwit abducts the intelligent and gorgeous Riley Lawson (Ashley Johnson), it would appear that poor Otis has finally met his match.

Much to the titular loser’s dismay, Riley escapes from her kidnapper’s twisted little dungeon and manages to contact her parents (Daniel Stern and Illeana Douglas), who have grown increasingly irritated with a bumbling FBI agent’s handling of their daughter’s deadly predicament. With the assistance of their wise-cracking son, the family decides to take matters into their own hands, breaking and bending the law as they embark on a mission to retrieve their daughter by any means necessary.

Quick question: How can you make both Kevin Pollack and Daniel Stern, two incredibly funny and gifted individuals, seem boring and lifeless? You give them absolutely nothing to do. Therein lies the problem with the film in general: everyone on-board seems blasé, disinterested, as if they just showed up on set to say their lines and collect a paycheck. That’s because “Otis” is a largely by-the-numbers film that tricks you into thinking it’s edgy and darkly comic simply because it sticks one soiled toe outside of the proverbial box every once in a while. The film looks and sounds great, for sure, but there’s really nothing under the hood to keep it going.

In fact, Ashley Johnson is the only person in the entire picture who pumps a little juice into this mundane material. If she were absent from the beginning of the feature, I would have probably turned it off and proceeded to lick paint chips off an unfinished basement floor. She is, I’m afraid, the lone spark in this otherwise dark and dreary cinematic experience. That’s a fairly sad statement given the quality of the cast Krantz has to pal around with. Wasting these fine guys and gals on a clunky, second-hand script is a crime I simply cannot forgive. promogirl.ch

From where I’m sitting, “Otis” is a failure. Not a total failure, mind you, but a failure nonetheless. An intriguing premise and gimmicky characters will only get you so far, especially when we’re dealing with a dark comedic spin on familiar material. Maybe I just didn’t get the humor, which is probably what fans of the film will tell me once words spreads that I didn’t care for it. Which may very well be the case, as comedy is easily one of the most subjective genres artists and audiences can tackle. Regardless of the reasons, “Otis” didn’t work for me, though it may very well work for you.