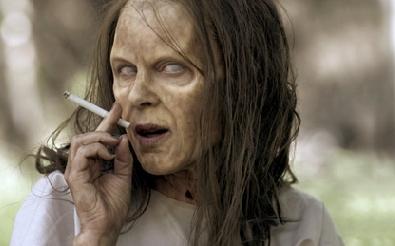 It ain't easy being a boy-toy. Just ask Jack Wade. With his acting career going nowhere he thought he'd hit the jackpot when he hooked up with and eventually married a rich Hollywood executive. Life was good for a while until Frankie, his wife, went under the knife for some liposuction and ended up in coma.

With the medical bills draining her fortune and her family making moves to keep her money for themselves, Jack turns to the one thing he still owns, a cabin in the woods he won in a poker game, and along with his lawyer cooks up a plan to take his still-comatose wife there to kill her and collect on the insurance. What Jack doesn't know is that his cabin has a history involving – all together now – a murder-suicide and an Indian burial ground. Note to prospective cabin builders: when you are digging the foundation for your cabin deep in the woods, if you dig up anything resembling skulls, beads or tomahawks, do yourself a favor, move 100 yards to the left and try again. The forest is a big place and life is short enough without having to deal with ancient malevolent spirits.

Not long after moving in Jack begins being haunted by the ghost of his not-quite-dead-yet wife in between run-ins with the quirky residents of the town and his budding romance with sexy local law woman Constable Kate. Most of the film is given over to the slow burn escalation of weirdness into murder and just as we start to question whether something supernatural is truly at work or if Jack is just losing his mind, the film blurts out the answer in a big way with talking severed heads and reanimated corpses throwing out punchlines.

In the last thirty minutes the film turns into an an over-the-top splatter comedy that is clearly shooting for an Evil Dead/Re-animator vibe with lopped off body parts and arterial spurts galore. It shouldn't be a surprise that the movie never approaches the madcap brilliance of its inspirations but if you're tired of the ultra-gritty serious vibe of most horror films today and you're looking for a fun, disposable movie that hearkens back to the 80s when horror films didn't take themselves very seriously, you might just enjoy “Dead and Gone.” Then again, plenty of people also enjoy auto-erotic asphyxiation and/or “Two and a Half Men,” so your results may vary.

One of the biggest flaws of the movie is that to convincingly tell the story of a man battling insanity a film needs a strong director-leading man team. Think Kubrick and Nicholson, Raimi and Campbell. While first-time director Yossi Sasson and star Quentin Jones do their best, they never quite pull it off. Sasson depends too much on tired music video style fast motion and editing tricks and Jones doesn't seem to make up his mind whether to play his character as British or not until halfway through the movie.

Sasson has cast the film like Rob Zombie working on a budget. There's a constant stream of cameos of the “hey, isn't that...” variety. We get Tenacious D's Kyle Gass as a televangelist, Zach Ward as a weatherman, Angela from “Sleepaway Camp” as the lawyer, Dante's girlfriend from “Clerks” as a nurse and some guy from Evanescence as “Booger.” I don't mind the occasional stunt cameo but I do think it is a little shady to give K.G. and Zach Ward top billing on the DVD box for what amounts to a combined total of about 5 minutes of screentime in which they don’t even directly interact with any of the characters.

To add insult to injury, the actress who plays Kate also gets her name on the cover but the lead actor, who is in almost every scene in the movie, doesn't even get a mention. Even the soundtrack is a cameo of sorts as it was composed by “Friday the 13th's” Harry Manfredini. His bombastic style is evident, although it’s a bit of a headscratcher as to why this movie’s answer to Jason’s ke-ke-ke ha-ha-ha theme is some sort of monkey hoot sound that is supposed to represent Jack's insanity.

Another puzzler that is hard to not notice is the fact that the cabin itself seems to house an alternate dimension inside. From the outside it looks like a tiny cabin with two or three rooms max, but once inside the interior it appears to be a sprawling and spacious soundstage. It’s a set that might work in a stage play but in a movie just looks cheap. Particularly odd is the wall-less, empty space of a room that houses Frankie and all of her medical equipment. It's so not trying to actually look like a real room that at any minute I expected a fog machine to turn on and a hair metal band to leap out and start making a video.

“Dead and Gone” is not a great film, or even a good film, but it is an okay film made by people with good intentions and a low budget and I'm a firm believer in the principle that the world needs okay films. What else are we going to put on in the background while we do the ironing or play Peggle? If you have a soft spot for the E.C. Comics sense of humor and the light-hearted cheesy delights of hammy 80s horror you probably won’t mind spending some time with “Dead and Gone” and taking a trip back to the days when horror movies were cheap, ugly, silly and fun.