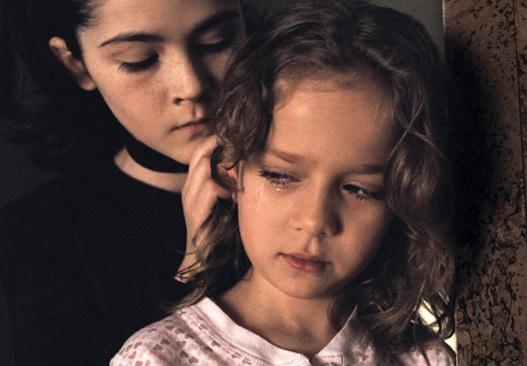 Kate (Vera Farmiga) is one damaged mommy. She battles alcoholism -- a disease which nearly cost her the life of her young daughter -- and she recently gave birth to a still-born baby girl. She's out of work, and her mother-in-law is a hateful pain in the ass. Things could be going better.

But with the help of her therapist, and the support of her loving husband John (Peter Saarsgard), Kate stands ready to welcome another child into their lives -- perhaps even, an Orphan. Sadly, as we've been informed by a harrowing opening sequence, this is not a movie about things just working out. Instead, the arrival of Esther, a nine-year-old girl ostensibly from Russia, but orphaned in the US when her previous foster family died in a house fire, serves to expedite the gradual unraveling of a happy home.

At its core, "Orphan" is a movie about families. Specifically its about the family we always dreamed of and the family that we end up with. For Kate, the gulf between these two -- enlarged primarily through bad luck but also personal failures -- has served as a burden that has ground her down, sucking the vitality from what was an otherwise happy life. John and Kate's hope is that by filling the holes in their hearts created by the loss of their third child, they can regain the love and happiness that they seem to have lost. It's not a bad plan either. But then there is Esther.

"Orphan," capably directed by Jaume Collet-Serra, spends most of its time rooting through the basement of John and Kate's marriage, exposing its festering secrets to light, and then letting those sore points fracture. The precocious Esther begins orchestrating this entire process from the moment she meets her adoptive parents. From that point forward the tension of the film derives both from her continued efforts to undermine Kate as well as the brutal style she deploys in covering her evil tracks. This is not a new formula -- call it "The Good Son" meets "The Stepfather" meets "The Hand That Rocks the Cradle" -- but that doesn't make it any less effecting.

Perhaps, I've gone soft in my newly-wedded-ness, but watching "Orphan," you at least want John and Kate to work it out and get on with the business of being upper-middle class white people. Sure they're bourgeois, but in the hands of Farmiga and Saarsgard, they're also very human -- damaged and spiteful but also loving and nurturing. Much of the emotional response to the film comes not from fear, but desperation. This is a natural outgrowth of "Orphan's" structure, as we the audience are privy to far more information about the circumstances than either John or Kate alone, and we can see where each is wrong and how their failures to communicate and trust are leading to their inexorable demise.

All this leads us to the weak spots in what is often a chilly film-going experience. Despite the fact that we're dressing it up with A-list talent, "Orphan" is still a movie that feels at times feels familiar, even ordinary. These are beats that have been hit before, and in settings far less glamorous (I'm betting Lifetime Movie Network has a couple similar scripts sitting in its vault). To top that off, many of the twists, including the final "shocker," will be pretty obvious to even the most casual fans of "Law and Order: SVU."

Collet-Serra expends no small amount of effort trying to imbue the proceedings with enough artistry to justify the big screen treatment, and aside from a handful of overly-familiar, under-baked conventional shots, he succeeds in this attempt. The downside of this is that what could have been a tight, by-the-numbers thriller, gets drawn out a little too far at times, with nothing supremely compelling added save for some beautiful winter scenery or interesting architectural flourish.

The film's saving grace, and what should make it at least rental-worthy for most horror fans, is that where it might have been very easy to make a few small cuts here and there to get "Orphan" under the PG-13 rating, the filmmakers here decided to go for broke and embrace their R. That's not to say that one should expect "Saw" levels of violence or gore. Instead "Orphan" traffics in the type of emotional gut-punches and twisted psycho-sexual perversities that make the otherwise silly-sounding distinction "adult situations" make some real sense.

John and Kate's is a small, damaged, but loving family. They've been through so much that they just want -- and we want for them -- to start being normal again. And it's into this situation that Esther steps to wreak pulpy, and at times unintentionally hilarious havoc. If watched straight-up, there's a number of scenes that could strain credulity and pull one out of the film. But enjoyed for the zany thriller that its climax shows it to be, "Orphan" can be a lot of fun.