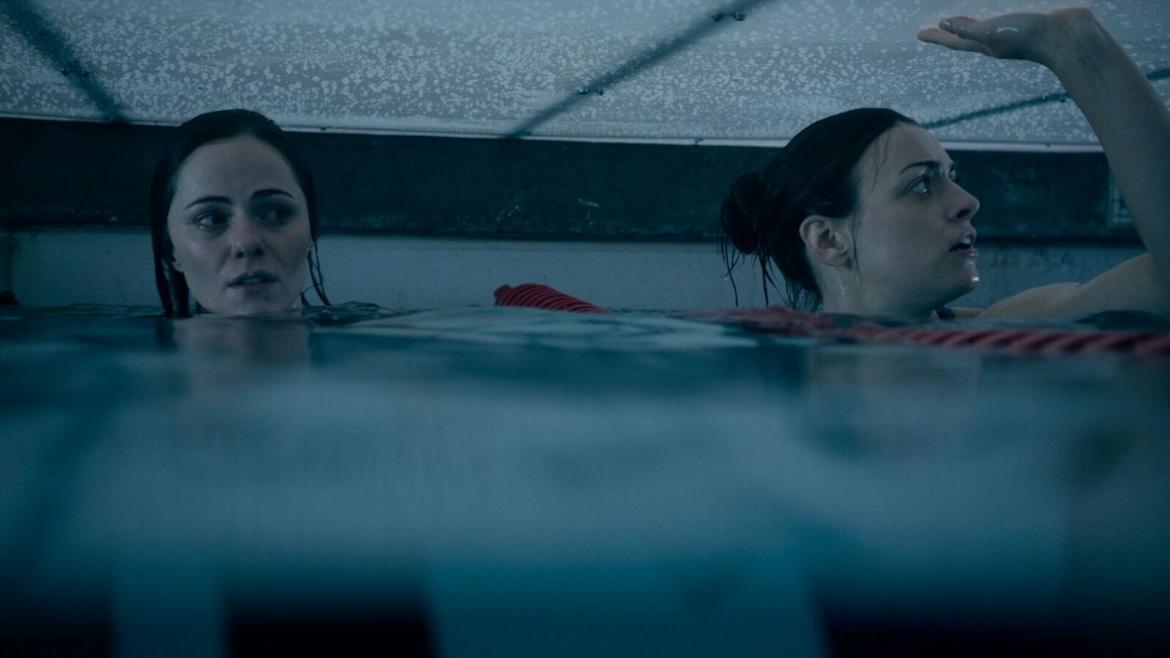 2017, not a good year for sisters and their water outings. Not only are these siblings finding their way into trouble, but the movies featuring their problematic scenarios have not been entirely encouraging. 12 Feet Deep is just the newest in as many weeks trapping a pair of damsels in a single location to fight for their survival.

The circumstances here are considerably mellowed when compared to the previous "trapped sisters" flick this year, 47 Meters Down. Estranged siblings Bree (Nora-Jane Noone) and Jonna (Alexandra Park), meet after years apart to mend their broken bonds during an afternoon swimming at a local indoor pool. The manager (Tobin Bell), perhaps frustrated with his stance in life, tries to rush everyone out to enjoy an extended holiday weekend and doesn't see the sisters at the bottom of the pool searching for a lost engagement ring and shuts the fiberglass cover--trapping them underneath.

Seems relatively harmless, right? When compared to other films where protagonists must fight the elements, a cushy chlorinated pool dwells entirely in "first-world problems" water. Billed as "Based on True Events" Matt Eskandari's flick ups the stakes by making one of the two siblings diabetic and the other, a troubled gal with a history of depression and substance abuse. So, if you think it's gonna be all underwater tickle fights you are sadly mistaken. The two sisters bicker constantly and trade hurtful barbs of brutal honesty--even after a common enemy enters the picture.

Pool janitor, Clara (Diane Farr), stumbles on the two and instead of putting the ordeal to an easy end, she sees potential for quick cash. Clara has troubles of her own that are at odds with her humanity--both sides play a tug-of-war that has her pitting the sisters against one another one second and searching for an out that keeps her out of trouble while helping them at the same time. However, her inclusion as a character often feels like a forced decision to inject an antagonist that keeps this from being anything more than a short cathartic journey for the duo.

Catharsis is achieved to a certain degree when the desperate swimmers reach their breaking points. Physically and emotionally exhausted Bree and Jonna plot ways to get back at their outside foe while conquering the confines of the pool and the tools at Clara's disposal to make that space more daunting and dangerous. There's an invisible clock ticking down to when Bree can no longer go without her diabetes meds as the sister's tragic backstory comes to a head with some effective moments of sisterly devotion that makes some of the meandering near the middle worth doggy paddling for.

Eskandari's film belly flops with the introduction of a poorly conceived "villain" but in the end fights back up for air with the strong performances from Noone and Park. 12 Feet Deep might spend a little too much time dipping its toe in the water waiting for the right temp before diving in, but once it does it swims a confident yet lopsided line to the finish.