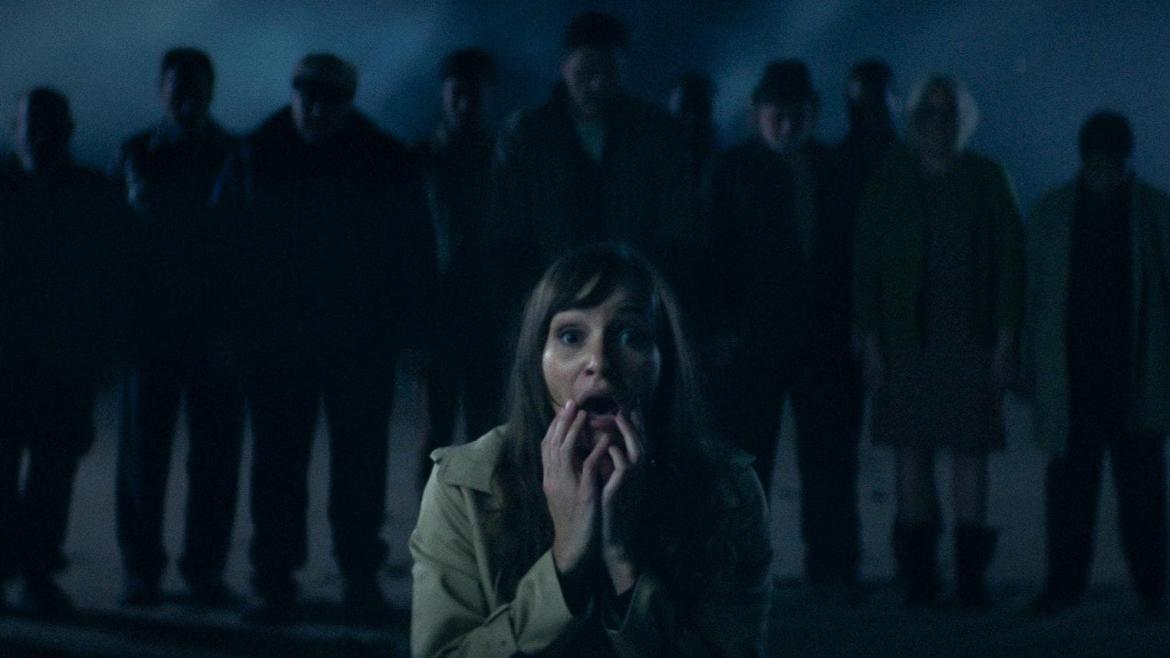 Mickey Keating was a busy guy in the 2010’s, releasing 6 features between 2011 and 2017.. The young auteur toils in extremely low budget, but highly cinematic concepts with a mostly straightforward technique. Keating’s latest, Offseason, bears many of the director’s trademarks , but is quite ambitious as its layers start to peel away.

Offseason follows Marie (Jocelin Donahue) who receives a mysterious letter beckoning her to return to her coastal hometown where her mother’s grave has been vandalized. She arrives as they are closing the island to tourists for the season. The town is mostly deserted and the few locals she does run across display peculiar behavior toward her. Before long, Marie’s homecoming becomes a horrifying journey of discovery as she unearths the shady past of the town and her mother.

Buoyed by a dreamlike aesthetic, Keating’s often eerie and surreal style feels perfectly attuned to the waking nightmare Marie experiences. Soft blue lighting and fog follows Marie everywhere she goes like you’re following her through a lucid dream that becomes weirder and weirder the deeper she goes. In fact, for most of the film it feels as though we’re leading toward the realization that a lot of this is a bad dream. But the plot unfolds wonderfully to a heightened supernatural spookshow that is a chef’s kiss of nautical themed horror. Furthermore, the film doesn’t beat down the audience with over stylized special effects and instead keeps a grounded low budget approach. Where Keating’s vision stumbles is when it really starts to lean into the supernatural. It feels like budget constraints prohibit it from delivering some epic and gooey moments which are otherwise buried almost completely in darkness.

Donahue weaves through each scene confidently in spite of the weirdness she’s faced with around every corner or foggy street. The cast is quite sparse leaving most of the work to Donahue with a sprinkling of Joe Swanberg and Jeremy Gardner—the latter of which providing an info dump late in the film to catch the audience up on what’s really going on in this community. Expanding on the mythology through Gardner’s character feels like Keating’s desire--or perceived obligation--to hold the audience’s hand through the choppy supernatural waters. It’s ultimately a nice compliment to the narrative momentum, though the strategy does deflate some of the thrill within the mystery.

Offseason dips its toes into an epic sea themed horror narrative without deciding to dive into the deep end. Keating toys with some wonderfully eerie ideas and creepy visuals but pumps the brakes just shy of it reaching its full potential. Even still, driven by its skin crawling script, Offseason remains a tourist trap worth getting swept up in.

Screened as part of the 2021 SXSW Film Festival.