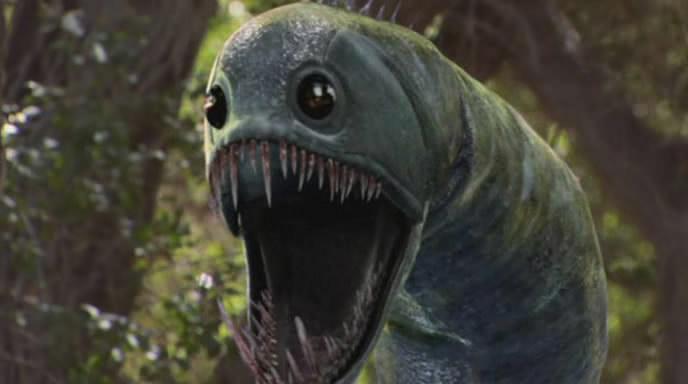 For most people, the first week of August signifies little more than the fact that summer is nearly over. However, for many nerds and TV lovers, it's Shark Week, a week where we bow our heads in reverence to the finned terrors of the sea. What began as a convenient way for the Discovery Channel to cluster it's shark specials in the late 80's has blossomed into a cult phenomena that extends far beyond cable. It goes without saying that genre fans frequently use this week as an excuse (as if you need one) to revisit the Speilberg classic "Jaws," but I have taken it upon myself to use this watery week as an excuse to knock Patricia Harrington's "Razortooth," off my Netflix queue. As one might guess, I have paid the price for messing with tradition.

In the simplest terms, "Razortooth" is a movie about Southeast Asian mega-eels that can also survive on land and have an insatiable hunger for human flesh, terrorizing a community in the Florida Everglades. The "community" in this case includes a pair of escaped convicts, a group of children on a canoe trip, a cluster of college students aiding a crazy professor, and a pair of law enforcement officials that are in the midst of rekindling a formerly failed romance. Later in the film, we are also introduced to an angry mob of redneck parents that 'go all vigilante' after (spoiler) their kids are devoured by this transplanted water-beast. I generally hesitate to describe the entire plot in a review, but I'm afraid there is literally nothing going on in "Razortooth" beyond what I just described.

B-films based around monsters tend to live or die based on the allure of their chosen abomination, and in that way, "Razortooth" deserves a powerful sigh of indifference. If a viewer happens to go into the movie without first seeing the cover, they will only have to wait less than five minutes for the titular beast to be completely exposed in all its computer-generated glory. I have begrudgingly accepted that CGI is the standard in horror films these days, but I'm still waiting for the day where directors learn to creatively hide it instead of using it as a crutch. The body count is very high in "Razortooth," but only one or two of the dozens of deaths stand out, including a particularly entertaining moment that aims to scare viewers away from outhouses in the same way that "Jaws" did from beaches years ago.

"Razortooth" is not the worst straight-to-DVD monster flick ever made by a long shot, but it may be the most boring. In its 90 minute run time, I can count the moments that stood out on one hand, with fingers to spare. Shark Week drives people to watch a lot of crazy things, but I sincerely hope that I'm the only person that steered the boat in this direction.