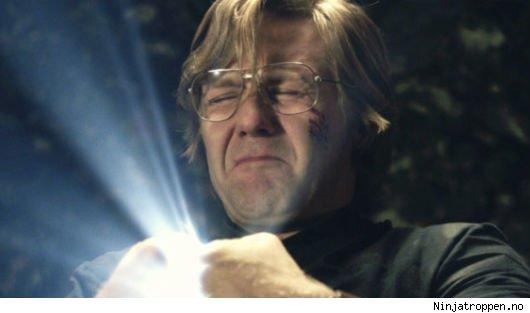 “Norwegian Ninja” is the true story of Arne Treholt, a Norwegian diplomat/journalist/ninja who was convicted to a 20 year prison sentence in 1985 for selling state secrets to the Soviet Union. At least, that’s what this film claims. Arne Treholt is a real person, that much is clear. All the stuff about him being the leader of an elite ninja strike force reporting directly to the king of Norway and living in absolute harmony with nature on a remote island protected by a force field powered by feng shui… I’m going to go out on a limb and guess that some of that might have been embellished a bit.

The embellishment goes deeper with the antagonists of Treholt’s ninja troop, a shadowy anti-communist organization called “Stay Behind”. Stay Behind groups were CIA and NATO funded groups that were embedded in many European countries during the Cold War to form the core of a resistance movement should communism begin to take hold. In the film, Norway’s Stay Behind group is an underground terrorist operation led by a ninja troop washout named Hans Otto Meyer which isn’t above staging the occasional random bombing in order to pin the blame on the commies and keep anti-Soviet sentiments high. In 1978, the real Hans Otto Meyer was discovered to have a massive cache of weapons hidden in a bunker complete with a hidden entrance through a fireplace and automatic machine gun to take care of anyone who got too close. Meyer is widely believed to have been the head of Stay Behind, although it is less widely believed that he was a failed ninja/supervillain.

In case it isn’t already obvious, “Norwegian Ninja” is an incredibly strange film. It takes some real life events from Cold War era Norway and uses those as a launching pad for a story that features a man reaching enlightenment through a hot dog and a ninja master who looks more like John Denver than Sho Kosugi. The film is presented as a pseudo docudrama, seamlessly blending in actual period news reports with new footage which has been made to look appropriately old and grainy. The look of this film is carefully composed and every shot glows with a grainy hyperreal sheen that brings to mind 80’s B-movies but treats the ninja magic and mysticism as just another part of normal geopolitics. Imagine “Danger: Diabolik” as directed by Wes Anderson with additional input by JFK-era Oliver Stone and you have a good idea for the look and feel of “Norwegian Ninja”.

The special effects and action scenes have a chintzy feel which can be oddly comforting for those of us who grew up watching Cannon Films on VHS. CG is kept to a minimum, in favor of miniatures and all of the martial arts scenes are thoroughly unconvincing. It is refreshing to see unrealistic but still aesthetically pleasing effects work, although for a movie about ninjas, the action is a little undercooked. These ninjas are far more into spouting hippie-dippy philosophy than flipping out and killing people. I kept hoping that the relatively tepid and sparse action was going to give way to over-the-top, 80s style, explosion-filled lunacy in the third act, but that never came. I appreciate the comedy and the extensive alternate world-building, but I don’t think it’s too much to ask that a movie about ninjas engage in a teensy bit of ninja mayhem.

One of the traps “Norwegian Ninja” avoids that all too many movies of its kind falls into is constantly winking at the audience and letting us know that they’re in on the joke. The whole movie is played completely straight-faced and it never drops the act to show us that it is well aware of exactly how clever it’s being. If a few of the more obvious jokes were toned down this could pretty easily pass for some kind of bizarre forgotten 80s movie made by an insane person. In an age when so many movies feel the need to be “meta” and so self-conscious that they never, ever let you forget that you’re just watching a movie, it’s a pleasure to watch a movie that is content to just be what it is. Whatever that might be.