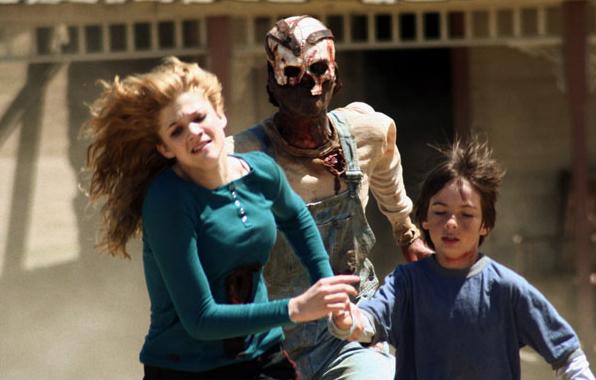 At first glance, director Jack Messitt's snappy 2008 feature-length debut "Midnight Movie" may seem like yet another tired retread populated with a handful of pretty actors who are probably too young to genuinely appreciate the movies that inspired this surprisingly sharp, blood-drenched excursion into the well-worn slasher subgenre. And, for the most part, your knee-jerk reaction to the film is fairly accurate. However, because Messitt and everyone involved appear to be having such a blast with the material, chances are you'll forgive the picture its trespasses, of which there are a few. Assuming, of course, that you have a high tolerance for moderately attractive individuals in varying degrees of peril and illogical supernatural scenarios.

Taking cues from Mark Herrier's criminally underrated 90's horror outing "Popcorn," the picture follows the late-night adventures of a colorful group of poorly-developed characters during the screening of a particularly heinous genre flick crafted by a certified psychopath known for his extremely violent tendencies. What the patrons and the employees don't know, of course, is that local authorities -- which includes the maniac’s former doctor and a cop hell bent on capturing the lunatic -- believe he might pay an unscheduled visit to the showing, an event which could end in wanton bloodshed and dismemberment. Sounds fairly routine, doesn't it?

Problem is, the killer isn't playing by traditional cat-and-mouse rules and regulations. And he isn't planning to sneak Solid Snake-style through the theater's ventilation system, either. In fact, his approach is much more metaphysical in nature, a fact which comes to light when our feisty group of randy teens begin watching their friends die horrible deaths on the big screen. As the on-screen and off-screen body count starts to rise, our heroes and heroines make a startling discovery: the killer from this decidedly trashy B-grade horror flick is the same guy who's picking them off one-by-one within the confines of this strangely spacious movie theater. Is the villain really the film's unstable director in a stylish disguise, or is something much more sinister at work?

"Midnight Movie" isn't high-art, and I don't necessarily think it ever wanted to be. Were it not for the substantial amount of blood and guts that Messitt and crew toss about at any given moment, you might mistake this harmless outing for something cooked and served by ABC Family during the height of their Halloween programming schedule. The film's jovial, sophomoric attitude threatens to derail the whole shebang, that is, until you have no choice but to give yourself over to its goofy, indescribably innocent charm. As far as horror flicks go, this is as inoffensive as you can get and still receive an R rating.

All of these vague allusions to family-oriented televised entertainment and flaccid terror aren't meant to insult or belittle Messitt's taut little shocker in any way, shape, or form. Don't let its seemingly docile exterior fool you -- "Midnight Movie" is more than willing to shower your unbalanced senses with than a fair amount of deliciously evil gore. For a film that never seems to take itself too seriously, it certainly has one hell of a mean streak. Thankfully, the picture comes pre-packaged with several believable performances which, I might add, are just as tasty and enjoyable as the mayhem itself. Imagine that!

What prevents “Midnight Movie” from being casually tossed into the same survival horror dump bin as most modern-day slashers? Simply put: charm, ambition, and the considerable skills of a director who seems to have a firm grasp of what makes horror work. The film doesn't break new ground, and it definitely doesn't present you with anything you and your entire family haven't seen before. Where these and lesser offenses have completely ruined other like-minded endeavors in the past, here they somehow manage to circumvent my last nerve by blinding me with Messitt's penchant for delightfully campy entertainment. It's simple and forgettable and short, for sure, but it's also a hell of a lot of fun. For some bizarre reason, that’s all that really matters.