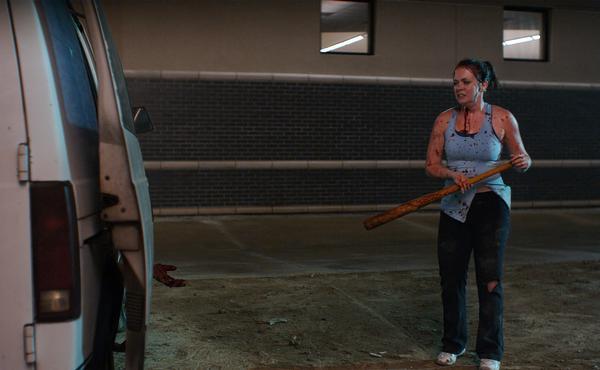 Stop me if you’ve heard this one before. So a priest, a pedophile and Sabrina the No-Longer-Teenage Witch are chained up in an abandoned warehouse with six other strangers. A guy in a hoodie and a Voldemort mask comes in and tells them that he will kill one person every ten minutes until they can tell him why they are being held captive. He tosses them some chalk and leaves them to scream, cry and spin elaborate, far-fetched conspiracy theories. No, it’s not a Glenn Beck biopic, it’s “Nine Dead” a puzzle flick with secrets that are best left unlearned.

Melissa Joan-Hart, who suspiciously served as a producer alongside her mother and step-father, plays a high powered prosecutor who is abducted and imprisoned alongside a motley group of one-note characters straight out of a weekend-long “How to Write a Screenplay that Sells” workshop. In addition to the aforementioned characters there’s also a square in a sweater vest, a Chinese woman who doesn’t speak English and an assortment of criminals and lowlifes. They all have secrets, some of which are so easy to spot that it’s hard not to get impatient when the characters refuse to make the tiny logical leaps that we’ve figured out a long time ago. Here’s a tip if you ever find yourself in a similar situation: if the priest is being cagy about knowing something but can’t quite bring himself to say anything, maybe, just maybe it involves something he’s heard in the confessional. Or done in the confessional. Either way, it’s all about the confessional.

When the characters aren’t being oblivious to great thudding clues dropped right in front of them, they’re making shockingly on-the-nose guesses and conjectures about the connections between them that almost always tend to be exactly right. No matter how twisty a rabbit hole they run down, somehow they always come out the other end with a specific and spot-on conclusion. It’s the precisely the kind of plot motivating bullshittery that keeps your average tv police procedurals chugging on and solving crimes in 60 minutes minus commercial breaks.

As a fan of the whole puzzle movie genre I’m inclined to give “Nine Dead” the benefit of the doubt. The biggest strike against this type of movie is that they tend to depend upon twists and twists almost always suck. The trick to enjoying any any twisty, secret-filled story (“Lost” fans, you might want to keep this in mind in the next few weeks) is to just enjoy the ride while being fully prepared for the ending to be a letdown. The ending of “Nine Dead” is not so much a letdown as it is a deliberate attempt to enrage and alienate the audience. Imagine a twist that aims for edgy but succeeds only in being pointless and then follow the lame twist with an ending that seems solely designed so that everyone finishes the movie angry and unsatisfied. Watching “Nine Dead” is kind of like watching a striptease that starts out relatively intriguing but as more is revealed it becomes increasingly apparent that what seemed alluring at the beginning is only going to get uglier and messier until you’re just about ready to rinse your eyes in Listerine and bury them in the root cellar.

It takes some serious acting chops to pull off a movie like “Nine Dead”. It takes place almost entirely in one room with characters who are chained up and can’t move. A movie like this, made in the vein of “12 Angry Men”, lives and dies on its performances. In the case of “Nine Dead”, it’s mostly dying. It’s no great surprise to see some hammy performances out of a bunch of unknowns in a low-budget movie but Melissa Joan Hart is so awful in this movie it’s hard to believe that she anchored two hit series. Granted, the bar might be a bit lower for children’s sitcoms but, man, is she ever terrible in this movie. I suppose it’s nice that she is clearly not one of those perpetually smiling dead-eyed childactorbots that came in her wake but if a local elementary school chose to do an adaptation of “Nine Dead” for their Spring play they could probably give the film version a run for its money.

The movie also owes a heavy debt to the original “Saw” in the way that 80% of the movies clogging the aisles at Blockbuster in the mid-to-late 90s owed a heavy debt to “Pulp Fiction”. One of the great missed opportunities of the horror movies of the last decade is that the lesson they took from “Saw” wasn’t the mystery at the core of the movie but rather that it’s cool to see people tortured in elaborate ways. Kudos to “Nine Dead” for forgoing the torture and gore (all the killings are done via handgun) in favor of a more compelling “Who wants revenge for what and why?” plot but when the actual details of the case come out it has the same problem as the “Saw” series: the supposed morality behind the killings doesn’t hold up to any kind of logic.

I approached “Nine Dead” fully prepared and willing to overlook the bad acting, the visually uninteresting setting and the inevitably disappointing ending. There came a point, though, when it all became too much and I realized that all of these minor flaws were rapidly snowballing into a mighty hot mess of a movie. I’d have to imagine that even someone who could overlook the rest of its flaws and enjoy this movie as campy trash would be unlikely to make it through the godawful ending without feeling the slightest bit cheated. If you’re a sucker for this kind of movie like I am, do yourself a favor, give “Nine Dead” a pass and dig up the far superior 2007 Spanish flick “Fermat’s Room”. Unless you enjoy getting angry at the end of movies, that is.