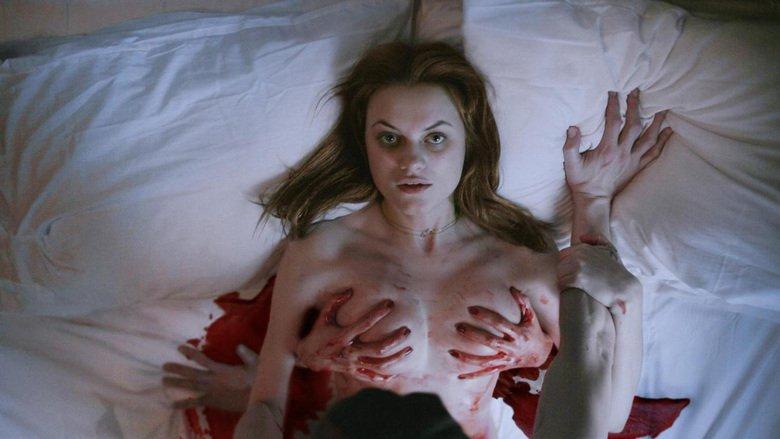 Numero uno on almost any guy's sexual bucket list is likely a good ol' menage a trois. Ladies, if you're man tells you the opposite, he's lying. Thus ends this week's relationship FAQs from Luke. However, those carnal fantasies likely don't involve one of the three participants to be the reanimated corpse of your dead ex like in Nina Forever, the debut feature from Ben and Chris Blaine.

Rob (Cian Barry) is down in the dumps following the death of his girlfriend, Nina (Fiona O'Shaughnessy). He then meets and begins seeing Holly (Abigail Hardingham), a fellow co-worker at the local grocery store. However, on a night where they begin to get intimate the unthinkable happens and the bloodied reanimated corpse of Nina rises from the sheets. Rob and Holly are obviously weirded out, but Nina does not appear to be vindictive, but instead just hurls sarcastic musings at them whenever they attempt to bump uglies. Determined to move on Rob insists that he's in love with Holly and completely over Nina, but neither can figure out how to get rid of her.

Nina Forever's taboo premise is eye raising to be sure, but in time it doesn't feel quite as bizarre as one might imagine. You can't really throw a rock into the vast ocean of cinema without it skipping of a movie that relies heavily on its themes or uses a supernatural object as a metaphor that the character's must deal with. In the case of the Blaine brothers' film Nina may or may not be just a physical manifestation of grief and/or guilt- rather it's from Rob's part in her death, or Holly's position as the first love after Nina and Rob were tragically ripped apart. In any event, the most risque aspect of the premise is that Nina just happens to appear in the most intimate of moments, which can be read any number of ways in and of itself. Once the problem presents itself, it's quickly pushed aside and the performances are allowed to speak for themselves along with the clever and sometimes poignant themes regarding love, loss, and the act of moving on.

Warm Bodies and Life After Beth each have tackled the zombie rom-com "subgenre" as of late, but Nina Forever takes a much different approach. It's not steeped in attempts at building mythology, nor does it masquerade around as a crowd pleaser. The Blaines' script uses a dry sense of humor to keep some of the darker aspects of its drama as a means of balance so as not to plunge the audience into outright depression or come of as overly goofy.

In the end Nina Forever doesn't come off as fresh and new as it probably could, but its disturbingly sensual approach to what are normally dark and depressing themes feels both enticing and vaguely insightful. If nothing else the Blaines have taught us that a dead ex revisiting during sexy time amounts to a small fortune when it comes to replacing sheets.