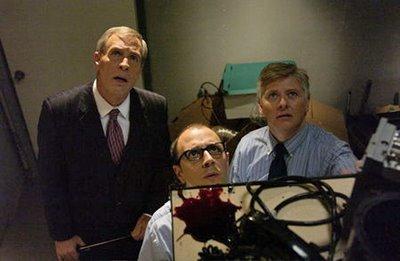 With films like "Machete" hitting it big this summer, the term 'ensemble cast' has been thrown around quite a bit. An assemblage of a few well-known an often hilariously mismatched actors can sell just about any premise. In the case of "Netherbeast Incorporated," it may be a stretch to say that it features an ensemble cast in the most traditional sense, but without the hodge-podge of established comedic actors and candidates for the "Where are they now?" list, I doubt that many people would bother giving this office comedy with an undead twist a chance.

"Netherbeast Incorporated" is centered around the goings on at Berm-Tech Industries, a corporation that is vague in function and large in size, run by Turner Claymore, played lovingly by Darrel Hammond (SNL). On a particularly troubling day, he calls in Otto Granberry, played by Steve (Burns) from Blues Clues (not kidding!), who notices a co-worker impaled with a wooden stake in the chair next to him. Turner then informs Otto that there appears to be a growing vampire problem at Berm-Tech, and sends Otto off with some new work and a warning to keep an eye out for the undead. At this point in the film, the viewer already knows that Otto, Turner, and all of Berm-Tech's employees are "netherfolk," the preferred term for vampires, and its soon explained that Turner has started to undergo "retardations," the netherfolk equivalent of Alzheimers. In his altered state, Turner hires a productivity expert (played by Judd Nelson of "Breakfast Club" fame), and a "first lifer" (human) security expert, and shenanigans ensue.

The amount of quoting and paraphrasing I've had to use in this review so far is an indication of just how hard and fast this film plays with the rules of vampirism. Netherfolk don't have sharp teeth or sleep in coffins, but they are sensitive to garlic and light, and feast on flesh. I'm grossly oversimplifying these characteristics, because the Ronalds brothers go to great lengths to break down every significant attribute of these beings, down to their sleeping habits and obsessions with Alexander Graham Bell and President James Garfield. This is sometimes played for laughs but is mostly used to establish that "Netherbeast Incorporated" is quite different than your average vampire film, which is especially interesting considering it slipped just under the radar before Twilight-mania propelled vampires back into the mainstream.

"Netherbeast Incorporated" aims to be much more of a commentary on corporate shenanigans, not unlike "Office Space," and manages to be pretty funny throughout. Darrel Hammond is the real standout, playing the (literally) brain-dead boss to great effect. Out of all of the actors in this film, Hammond sells his part the best, and ends up contributing the most to the overall comedic output. Steve Burns holds his own as Otto, managing to be quite likable as the main protagonist, which was a surprise considering he has very little practical experience outside of his run on "Blues Clues." I was most disappointed with David Foley and Jason Mewes, who aside from a few quips here and there, largely faded into the background. I can't blame them for this, as they weren't given much to work with among all of the exposition dumping and awkward courtship going on.

For being a largely comedic endeavor, there is some decent gore to speak of, though the film isn't terribly violent. More often than not, you will find the end result of someone being killed via wooden stake, rather than the action itself. There is also lots of implied flesh eating here, but very little evidence of that aside from the occasional gnawing on a bloody rubber hand or bite of a (human) meat pie. It's obvious that the intention of this film was to play the quirks of the netherfolk for laughs, rather than deliver an over-the-top gore romp. Restraint is the name of the game here.

Even though "Netherbeast Incorporated" is an unrated independent flick, it avoids extremes, sometimes to its detriment. While genuinely funny and charming, it is so subtle throughout that it almost lulls one to sleep, which is a shame considering the potential of the cast. In the years to come, I see "Netherbeast Incorporated" falling into a niche not unlike "Bordello of Blood," a film that you catch on TV, chuckle at a few times, and move on.