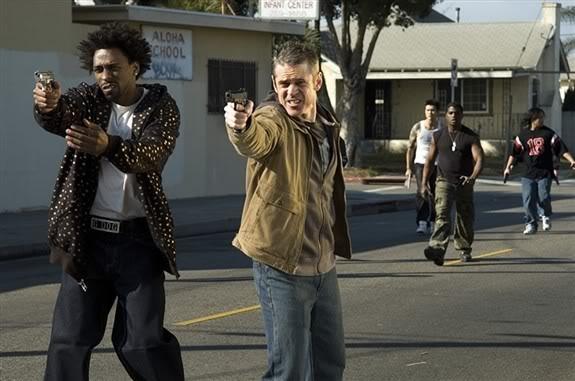 It's pretty hard to pass on a movie called "Mutant Vampire Zombies from the Hood" when the DVD features an undead, grill-wearing gang member and a tagline ("It's the end of the world, yo!") that's as moronic as it is stupidly funny. And while these peculiar elements might not be effective selling points for the masses, you can't deny the allure of C. Thomas Howell wielding no less than two handguns while staring wildly at something we cannot see. How writer/director Thunder Levin managed to lasso Howell for this admittedly wonky production is a mystery, though I'm sure it has everything to do with the former heartthrob's involvement in a little movie known as "Soul Man".

Not surprisingly, "Mutant Vampire Zombies from the Hood" isn't the most competent and well-developed slice of direct-to-video malarkey you’re likely to find languishing like spoiled chicken tetrazzini on the genre-saturated shelves of your favorite independently-owned video store. In fact, it’s not too far removed from the lump of cinematic coal known as “Gangs of the Dead” (aka “Last Rites“), a like-minded zombie-related endeavor yours truly was forced to consume against his will several years ago. What “Gangs” didn’t have, of course, was C. Thomas Howell, a large collection of shameless movie references, and roving gangs of zombie rapists. Yes, boys and girls, you heard me -- zombie rapists. Apparently being undead does wonders for your libido.

This particular low-budget outing opens with a tense gang-related showdown inside a medical storage facility, an event that is abruptly cut short by the unscheduled appearance of a bizarre energy field from space that smothers the entire planet in zombified radiation. Fortunately for these wordy hoodlums and the dedicated detectives who are moments away from making one of the biggest busts of their respective careers, the solar flare simply knocks them out for an undisclosed period of time. The majority of the global population, on the other hand, is instantly transformed into amorous, flesh-eating mutant vampire zombies from the "hood". Thank the good Lord for lead-lined medically supply warehouses, am I right?

“Mutant Vampire Zombies from the Hood” never clarifies what, precisely, these undead sexual deviants are, or why some of them have retained a functional amount of so-called "intelligence". The film’s sexpot female doctor attempts to explain the situation by tossing an array of medical mumbo-jumbo at the audience, but it doesn’t really shed light on anything whatsoever. Some of the survivors think they’re vampires, others are leaning towards zombies, a handful believe they’re mutations -- in the grand scheme of things, it really doesn’t matter who or what they are. It almost becomes something of a running joke, and actually helps the film survive some of its wonkier moments.

The entire cast -- including C. Thomas Howell as a gnarled, justice-dispensing detective with mad martial arts skills -- seems to be in on the joke, allowing for a number of suitably campy performances to bubble to the proverbial surface. Sine there's no real plot to speak of, the characters simply run around the deserted streets of Los Angeles for 90 minutes shooting zombies and cracking bad jokes involving George Romero movies. After a while, all of this nonsense becomes a little tiresome, even when the survivors are forced to confront an entire strip club filled with undead sex offenders and vampiric pole dancers. The initial shock was immediately followed by an indifferent yawn.

"Mutant Vampire Zombies from the Hood" isn't all bad, and I suspect there are plenty of deranged individuals out there who will take quite a shine to this ridiculous little production. However, all of the excitement and drama found within this lackluster title can be experienced while playing through either "Left 4 Dead" or its sequel, both of which I happen to own. A few minutes past the half-hour mark, I began to imagine myself running through abandoned apartment complexes and gore-encrusted hospitals, searching desperately for an escape route with guns blazing. Simply put: If "Left 4 Dead" is currently unavailable to you, "Mutant Vampire Zombies" is an acceptable low-budget alternative. Otherwise, log in and kill the bastards yourself. Even C. Thomas Howell can't compete with that.