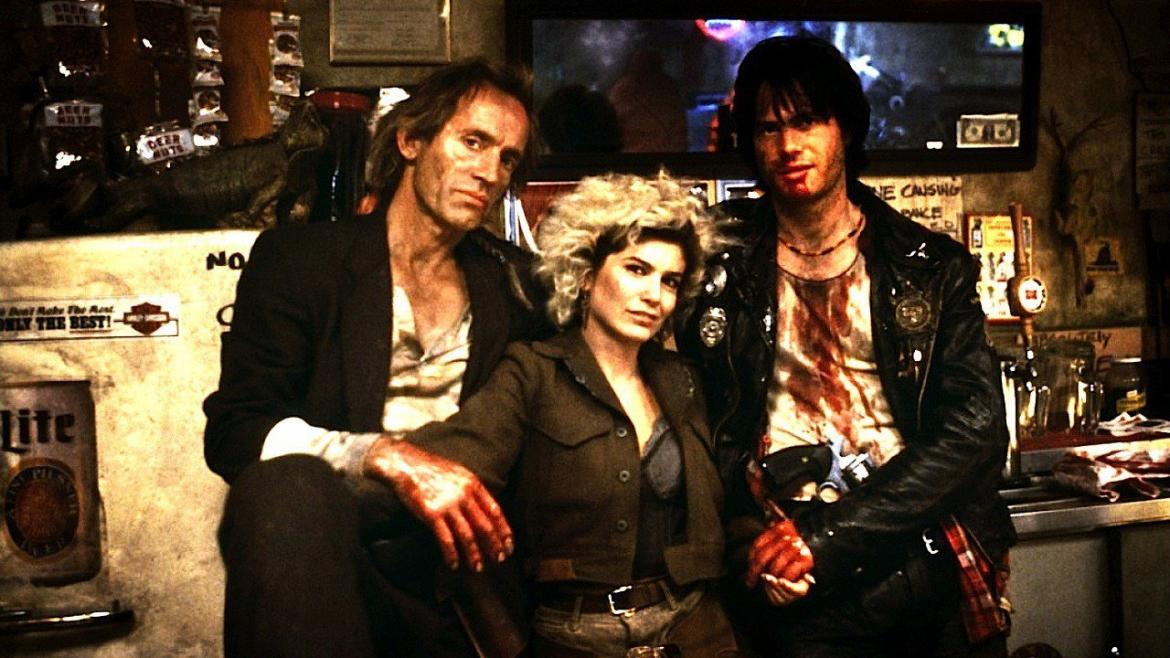 1987 was the year of the teen vampire movie, or so it would appear. Long before the Cullens started sparkling up the movie screens and playing absurd games of vampire baseball (riveting stuff, I’m sure) in 2008’s Twilight and its ensuing sequels, we were introduced to two badass vampire gangs. The first, and perhaps better known, of the two is a gang of glam rock vamps stalking the beach town of Santa Carla, CA; lead by David (Keifer Sutherland), in The Lost Boys. But later that same year, in a sleepy Midwestern town, the world met a ragtag group of vampires, lead by none other than Lance Henricksen. One of the early films of Kathryn Bigelow—the first woman to ever win the Oscar for Best Director—Near Dark seems the perfect film to examine as we continue through Women of Horror Month.

Near Dark recounts the story of a young cowboy named Caleb (Adrian Pasdar) whose life starts to transform before his eyes after he picks up a mysterious stranger named Mae (Jenny Wright) outside a convenience store one evening. The two spend the night driving around and waxing poetic about the stars and mortality until his companion starts to get a little jumpy about the coming sunrise.  When the two kiss goodbye, Mae gets a little carried away and bites him on the neck, before taking off running into the dawn. Almost immediately, Caleb is experiencing a lethal sensitivity to sunlight and is kidnapped by a suspicious looking RV with blacked out windows.

Now, as far as the story goes, Near Dark and The Lost Boys share more than than their release year in common. The plots have some striking similarities: Boy meets mysterious girl and, overcome by her beauty, is turned into a vampire (though the mechanics of this are very different in the two films), boy tries to embrace vampirism for a little while until he witnesses the true brutality of the life and is horrified, then boy tries to escape (seeking to liberate his love interest in the process) and a huge battle ensues with some pretty killer vampire deaths. Michael and Caleb even have their family structure in common; both boys are the oldest of two siblings living with a single parent (though the genders of parent and sibling are swapped in Near Dark). The vampire gangs even have some parallels to one another. They are both lead by an older guy, and have a young boy vampire. Near Dark is unique, however, in that Mae is not the sole female vampire (as Star is) and both Mae and Diamondback are badass vampires that don’t seem to just exist as fodder for male ego contests.

Now, to be clear, I in no way mean to suggest that this movie ripped off The Lost Boys, the two came out mere months apart, but it is curious that 1987 saw the release of two such similar vampire tales. And the places where the films differ from one another are much more interesting. The characterization of Mae and Diamondback, as we’ve addressed, was a refreshing difference in story from Star’s mostly whiny turn in The Lost Boys. But on a much more integral level, Near Dark is more deftly and seriously handled than it’s campy and glitzy counterpart. The gore and viscera are much more fully realized. When these vampires bite it (pun intended) there is no glitterblood or death-by-stereo, no Frog brothers to offer goofy commentary.

Most suggest that it was a case of bad timing in terms of the almost simultaneous release of the two bloodsucker films, that ultimately left Near Dark in relative obscurity as compared to the success of The Lost Boys, but the beauty of the accessibility of all media these days is you can stream this movie at your leisure—and you should! As a hardcore fan of The Lost Boys myself, I feel totally comfortable saying that Severen, played by Bill Paxton in a gleefully sadistic role, could take David any day. In fact, I’d pay good money to see it.