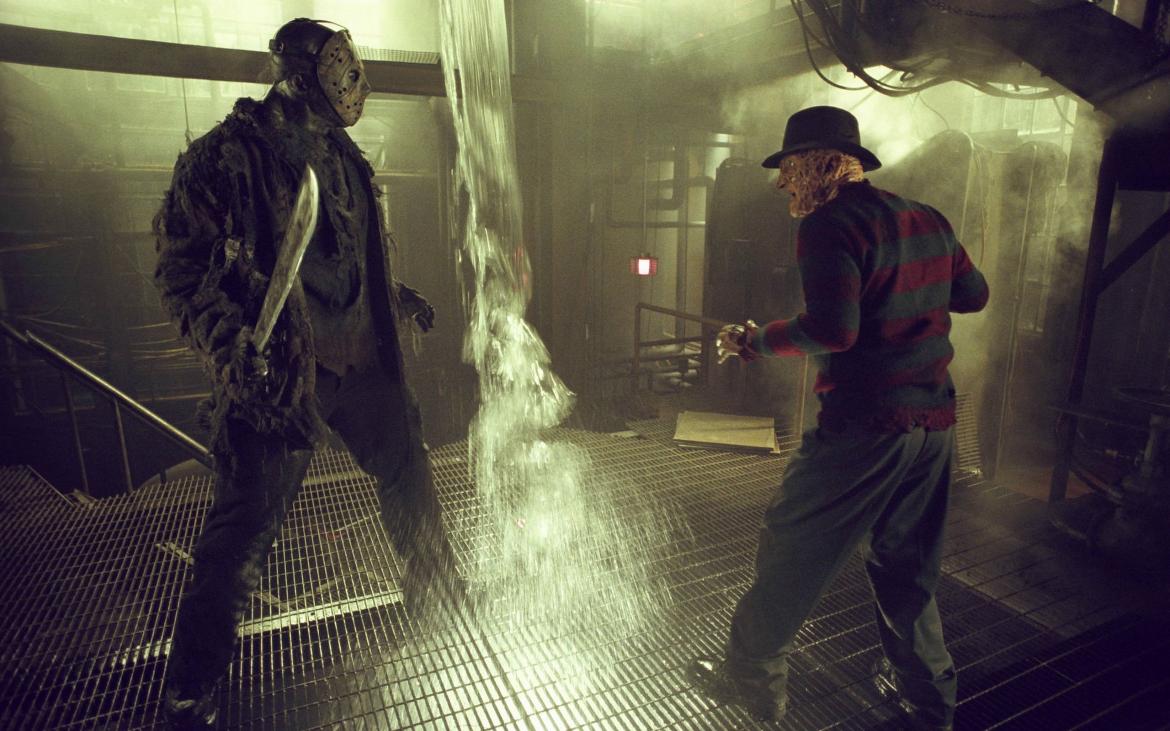 As the head-to-head reviews for the Friday the 13th and A Nightmare on Elm Street franchises have come to a close, Evan and Sophie have come together for a roundtable discussion and review of the film that inspired this series, Freddy vs. Jason. For those who are unfamiliar, a quick recap. More than twenty years after Jason Voorhees was born, and ten years after Freddy Krueger died, the two teamed up to bring horror back to Elm Street. Freddy, in a weakened state after being made corporeal and killed by his daughter, has finally found a way to come back. After encountering Jason in hell, Krueger devises a plan. Believing that he can control Jason, he sends the hockey-masked giant back to Elm St. to make the kids scared of him. Things quickly get out of hand and the two baddies rack up quite a body count before going after one another.

Sophie: I know I had seen Freddy vs. Jason before, back in the dark ages before I became a true horror fan. I had never seen A Nightmare on Elm Street or Friday the 13th movie, let alone many other horror films, and I remember almost nothing about it, so my expectations going into this movie were very low. The concept itself seems hokey and the early aughts were a weird time for the genre in general, let alone for the slasher franchises of the eighties. But I have to admit, in the spirit of full disclosure, that I had a blast watching this movie. It is absolutely not a work of great genius, but it has a lot going for it. So before we get any further, Evan, what do you think of this movie?

Evan: I have to say that I'm a big fan of this movie too! Thankfully, it came out at the height of my horror genre fandom so it was an event film for me. I loved the idea of having these two iconic killers face off in the hopes of seeing Freddy pull a classic pun attack on Jason, while Jason would just go to town on Freddy. The concept is definitely goofy, but I honestly feel that the script is pretty solid. Bringing these two together was a lot harder than it looked and I found that having Freddy use Jason as a scapegoat to bring his name back into teens minds to be brilliant. It was almost political in that sense. The cool thing was that there were other references to horror movies in the script as well. I loved that the main character’s name was Laurie; an obvious homage to Laurie Strode from Halloween. What touches did you like the most?

Sophie: I am glad you brought up the homages to other movies because I honestly think that was one of my favorite parts. Horror of that time was so self-referential and this movie really managed to weave in so many touches without making the movie overly clunky. Aside from nodding to older Freddy and Jason movies, off the top of my head I remember a Deliverance reference and one to Carrie too. I agree with you that the feat of making this story work is not to be overlooked. I think that the improved technical effects and ramped-up budget also really worked in this movie's favor. We got a lot more kills that looked a lot better, except perhaps for the copious amounts of CGI blood, which I'm not a fan of. I couldn't help but notice though that Jason still got way more kills than Freddy. I guess some things never change. Did you have a favorite kill?

Evan: See, that's another great thing that the writers did with horror references. The Friday the 13th films have always had more kills than A Nightmare on Elm Street so they kept that formula here too. There were some CGI moments that I didn't love like you said, especially Freddy grabbing Kia's nose out of the magazine. One I loved though was when Freddy tries for his first kill and sends out a large shadowed version of himself. It was something we hadn't seen Freddy do before, but it also made sense that it would be an ability he would have! My favorite kill would have to go to Gibb. The set up of it is great because we see her in a dream being stalked by Freddy, seemingly ready to be done in by his glove, when she suddenly collapses and dies due to Jason killing her in the real world. It was a reverse that we hadn't seen before since all of the Nightmare movies show the teens dying in their dreams with the aftermath of the real world effects to follow. This time we got a different taste and I always love that. Plus it sets up the tension between Freddy and Jason. What was your favorite kill? And I have to ask, do you think there was a clear winner in the end?

Sophie: That's a great point about Gibb's death. I know I probably should say that my favorite was Mark's death, since it's one of the only times we really get to see Freddy do his thing, and that was a good one. I think that my favorite kill has to go to the epic folding bed gag that did Trey in. Not only was it very satisfying because that guy was such a tool, but as the first real kill in the movie, it sets a tone that most of the deaths maintained, at least for me. Now let's talk about winners and losers. From a body count perspective, it clearly goes to Jason who hacked, slashed, and mauled his way through Springwood. Now, Freddy is the one who brought Jason back, but he quickly realized how little actual power he had over the stalker of Crystal Lake after he unleashed him. I think it's hard to see any way that Freddy can be called the winner here. What do you think?

Evan: Trey’s death is awesome! Definitely a favorite of mine too; especially since it brings Jason right back into the story like you said. The body count goes to Jason, but the overall battle? It’s hard to say. Jason stabs Freddy with the glove, but Jason also gets a machete to the heart. Laurie cuts off Freddy’s head, but then Jason emerges from the water holding Freddy’s head that winks at the camera. So they’re both alive? Or was Jason emerging from the water actually just a dream sequence? The creators indicate in the commentary that there is a clear winner, so that leads me to believe that Jason won and the winking Freddy head was just a fun last moment for the movie. Thoughts?

Sophie: I mean, Freddy definitely got some shots in, but I think I have to go with Jason, even though it pains me. I'm glad that Jason still sustained some injuries, and Freddy definitely did some psychological damage (if that's even possible) when they were in the Dream World. I think this movie was a blast despite the fact that my dog didn't come out on top. Let's go ahead and both give it a score and wrap up? I would give this movie an 8, detracting for poor CGI and lack of Freddy kills. I am also taking away some points because of Kelly Rowland dropping the wrong kind of F-Bomb, which I found really upsetting. What are your thoughts?

Evan: Trust me, even though Jason was my guy this round I do love me some Freddy. Interesting side note, several of the original scripts tried to tie in the Wes Craven's New Nightmare big baddy version of Freddy and make him the controller of movie Freddy and movie Jason. They ended up having to team up and kill him instead. It sounds a little complicated! I love that we're on the same page because 8 was sticking out in my mind too. I have to give them credit for making such a strong script and incorporating so much of what fans love from both series. Sad to note they also wrote the Friday the 13th remake; seems new content isn't their gift. Kelly got what she deserved for that comment. Even Freddy looked offended. Overall though, such a great time!