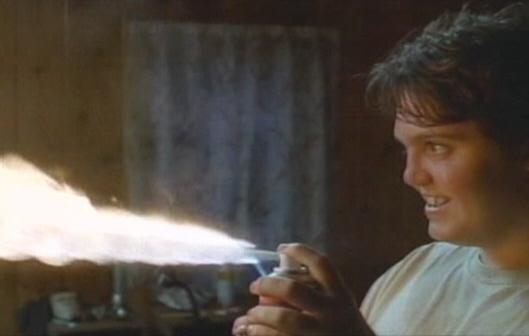 Twenty five years ago Angela Baker terrorized Camp Arawak after her psychological breakdown. Two other times beyond that she returned to wreak havoc and take revenge on camp bullies. Cut to today; welcome to Camp Manabe, run by greedy Frank and his half partner Ronnie. Arawak has been shutdown and demolished, but Angela’s been locked up for years, so no need to worry about that. So it’s business as usual for summer camp hijinks. Counselors screw, kids horse around, and bullies pick on the awkward. Enter Alan; he’s overweight, smelly, strange, and pushy. He’s also not very popular and becomes the official camp scapegoat for the summer. With frequent violent outbursts and disappearances, Alan becomes the prime suspect when the dead bodies begin to arrive once again!

The original “Sleepaway Camp” is a classic unto itself, if for nothing else than the final frame of film. The first sequel was passable, and the third was forgettable. There was a fourth that was never even finished. With this history in mind, the first question one must ask is; “Who wanted another sequel?” However, in this time of remakes and shoddy creativity, one can ask as well; “Well, why not?” Armed with the only major weapon they could muster, the original Felissa Rose and a handful of other familiar faces from the original flick, they settled on the ‘why not’ answer and made themselves a little movie.

At its core, “Return to Sleepaway Camp” is no different than any of the past movies; it’s chock full of corny jokes, over the top humiliation and screeching pansies. Where it differentiates itself is in its main star Alan. Michael Gibney, who plays our star, is an inexperienced actor trying to make his mark. Lucky for him he does! As the penultimate dweeb, he shines with his screechy returns and repetitive insults. (“Your ass stinks!”) He’s not the second coming of Carey Grant here, but the movie does shine a little brighter when he is on screen. С помощью информационного портала об онлайн казино, вы можете изучить всех ветеранов и новичков в сфере игорного бизнеса, отличная подборка и рейтинги многочисленных интернет казино.

The rest of the cast packed around him are really nothing more than scenery. All of the characters and the actors playing them are generic and fail to draw any sympathy from the crowd. It is nice seeing the few familiar faces from the first movie, namely Ronnie and Vincent Pastore, with a small scene for Angela’s brother Justin Tiersten. I will throw in here that it was cool to see Felissa Rose return once again, but there wasn’t much for her there. I was never all that attached to her in the role, so it wasn’t a deciding factor on the movie.

Where “Return to Sleepaway Camp” excels is in the kills! As sadistic as it sounds, they were all truly enjoyable and original. The special effects were handled well and helped to round out the week and stale story line. Be it a toilet death or nail aided bunk bed death, they were definitely the highlight of the film.

In the end, “Return to Sleepaway Camp” is a pretty bad movie. It’s filled with bad acting, warmed up plot and bad jokes. It is however a fun movie! Despite it’s flaws, they never once attempted to take themselves overly serious in the film and managed to create a pretty campy throw back. Ultimately, you’re going to groan, but you’re going to laugh quite a bit as well.