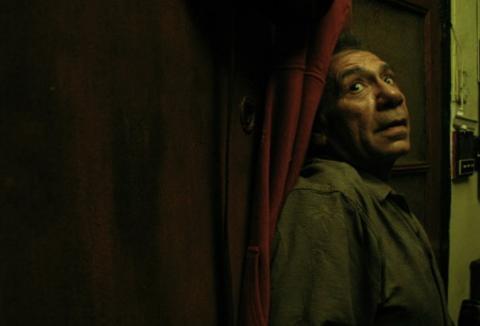 A deadly infection attacks Manhattan, borne from the hordes of mutant rats hidden away in the depths of the subway tunnels. As the victims are bit, they begin to transform into monstrous rat-like mutants. A group of apartment house tenants living in the lower class area of the island are forced to band together to protect their homes.

“Mulberry Street”, shot in 2006 and an entrant in the 2007 After Dark Film Fest looks to be a unique scare from the basic plot surmise. Mutant rats and a plague gone wild, both elements that we haven’t seen in the theaters for some time. As we dig into the many layers contained within the movie, we unfortunately discover that it’s not quite as unique as they would leave you to believe. In it’s simplest form, “Mulberry Street” is your basic zombie attack formula with rats substituting for the undead.

The strong point of “Mulberry Street” is the character development. The movie opens on Clutch, the bonafied good guy of the Mulberry St. apartment complex. Down to earth, he stops to share a kind word or a helping hand to everybody he meets. As he gets home and begins to clean up from his morning jog, he checks his answering machine to hear his daughter is coming home from the army. In this quick five minute montage, Director Jim Mickle manages to fully paint this character and leave him fully developed in an economical amount of time.

We know he’s going to be the one to go back and help somebody when the shit hits the fan, we know he’s going to be the tough guy, we know he’s going to sacrifice everything to save his daughter. His daughter Casey is developed in much the same way. We see her in the train station as she concentrates on the scars she received in her service to the country; we know by this that she is our tragic hero wanting nothing but the comforts of home after a traumatic tour of duty only to have it ripped away from her. In this department, “Mulberry Street” excels. The problems arise in the pacing and plot as it advances on.

The biggest problem with “Mulberry Street” is that we’ve seen it all before. This has every element of the zombie apocalypse, only with different set dressing. We have the slow outward expansion as we see person after person infected. We have the cluster of people trapped inside a lonely and forlorn domicile as they fend off the waves of mutant attackers. We have the hero and his solitary fight across a war torn city sacrificing himself to save someone he hardly knows. All of the zombie tropes are in attendance. Couple this with a crawling pace and the movie becomes a bit of a chore to get through towards the end of the second act.

This sounds like I hated this movie a lot which is really not the case. While many elements were derivative of other movies, they did a fine job with what they had. The characters were believable and endearing, the action was handle nicely when it did appear and there was some good gore and makeup effects. In this day and age it just felt like a ‘been there done that’ situation.

The rat people were nicely done however, and there was varying degrees of mutation that were well done without CGI effects. Latex and kayro syrup played well as we saw the ratlike creatures brought to life. While the creatures out in the open of Manhattan weren’t much to be scared of, once they entered the confines of the Mulberry Street tenement they became quite frightening indeed. As a matter of fact, if they would have concentrated the majority of the movie on the deadly mutants as they crawled through the walls and crawlspaces of the apartment like their four legged counterparts, this movie would have been all the better for it. In act three, as the creatures broke through the locked doors and began to sweep through the dark hallways of the building, the horror became palpable and well done. Otherwise, it was kind of boring.

“Mulberry Street” is a decent movie, especially given its indie nature and budget. The problem arises when you buy into the hype that it's something new and original. If you can get past these misconceptions you’ll be in for a decent scare; otherwise it’s just zombie movie x without the zombies.