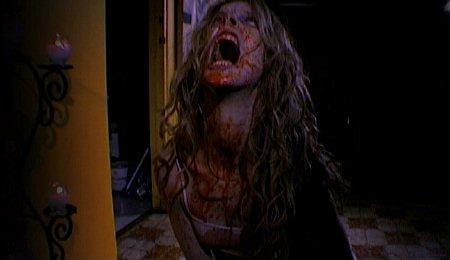 I have to admit that seeing the trailer for “Thicker than Water: The Vampire Diaries Part 1” would have prevented me from watching it had I not been obligated to review it.

And just so you don’t think I’m a honk for the Platinum Dunces, um Platinum Dunes level milk curd I’ll preface the rest of my review by saying that I am actually a micro-budget independent filmmaker myself. This forces me to appreciate lower production values. It also makes it nearly impossible for me to remain objective when watching a movie like “Thicker than Water: The Vampire Diaries Part 1”.

As a rule, I try to err on the side of the filmmaker because I understand what it’s like to be seven miles from the edge of creation, watching the sun set on your last day of shooting with Actress X and still be 10 set-ups shy of wrapping. I also know that many of us nano-Romeros try to make “The Shining” when we should be aiming for “Blair Witch” or maybe even “Blair Thumb”. You fall in love with ideas you can’t pull off, overestimate the talent you are working with, or think you can get by using a friend in a pivotal role because they are the coolest person you know. It’s a noble minefield we tread, but it’s a minefield just the same.

For theses reasons, I am actually glad I got to see the trailer for “Thicker than Water: The Vampire Diaries Part 1” before watching the movie. Because the trailer included title cards for some of the recognition the film had received. I can rest easier knowing that whatever I say about the film in this review, somewhere there are adoring audiences and festival judges who really enjoyed it.

The film follows Lara a social outlander and twin sister to Helen, a center-of-the-clique do-gooder whose conformity amplifies Lara’s weirdness. Their family is a collection of characters, from the gay, rubber band collecting, chemist brother to the matriarch of the clan, a former Bulgarian Olympic hopeful whose dreams were lost to injury.

At their 16th birthday party Lara is ridiculed by Helen and her friends and decides to exact revenge by way of the old Barbie doll, ginger and cow heart curse. Much to her horror her sister falls ill and dies. A day or so later during an electrical storm Helen returns, soaked in blood, wrapped in a body bag and crying about her first act of Vampirism. Thanks to their gay chemist rubber band collecting brother they soon figure out that a virus is destroying Helen’s red blood cells and necessitating her need to feed. Not willing to lose their somewhat beloved Helen a second time they undertake the harvesting of locals to sate her cravings.

Their collective conscience does not handle the transition to killers very well. But they press on providing meals for Helen. Of Course all is not what it seems. The family has some secrets that have yet to be revealed and few surprise visitors arrive on the scene to complicate their current arrangements.

“Thicker than Water: The Vampire Diaries Part 1” manages to be entertaining and in places even emotionally effective. It has some nice moments of performance, cinematography, and editorial flair. There are also some well reasoned viral vampire explanations and nicely constructed jokes. But the film has too many spots where its shortcomings take the audience right out of the story and put them in the position of being critical towards things that should be given. For example, when Helen dies Lara visits her room and grieves. The moment is sweet but it is ultimately undone by a shooting and cutting style that seems more concerned with finding good or cool angles than finding the right ones to express state of mind. These poor choices create tonal incongruity which is a recurring problem in the production as well.

As I said, I have a lot of appreciation for the effort; this makes it all the more frustrating that I cannot put aside the film’s problems and appreciate it for what is working. The dilemma I have is that there is not sufficient consistency on the technical end nor in the area of performance to keep me invested in the story.

Thanks to the trailer I know that there are those who have seen “Thicker than Water: The Vampire Diaries Part 1” and been better than I am about viewing the good stuff beyond the patchy execution. This is important because I truly believe that anyone who can mobilize to make a movie on this level deserves positive regard. But while I may really admire director Phil Messerer and his cast and crew for their dogged pursuit of the dream, I can’t champion the cause of this particular film.

Movies Like Thicker Than Water: The Vampire Diaries Part 1