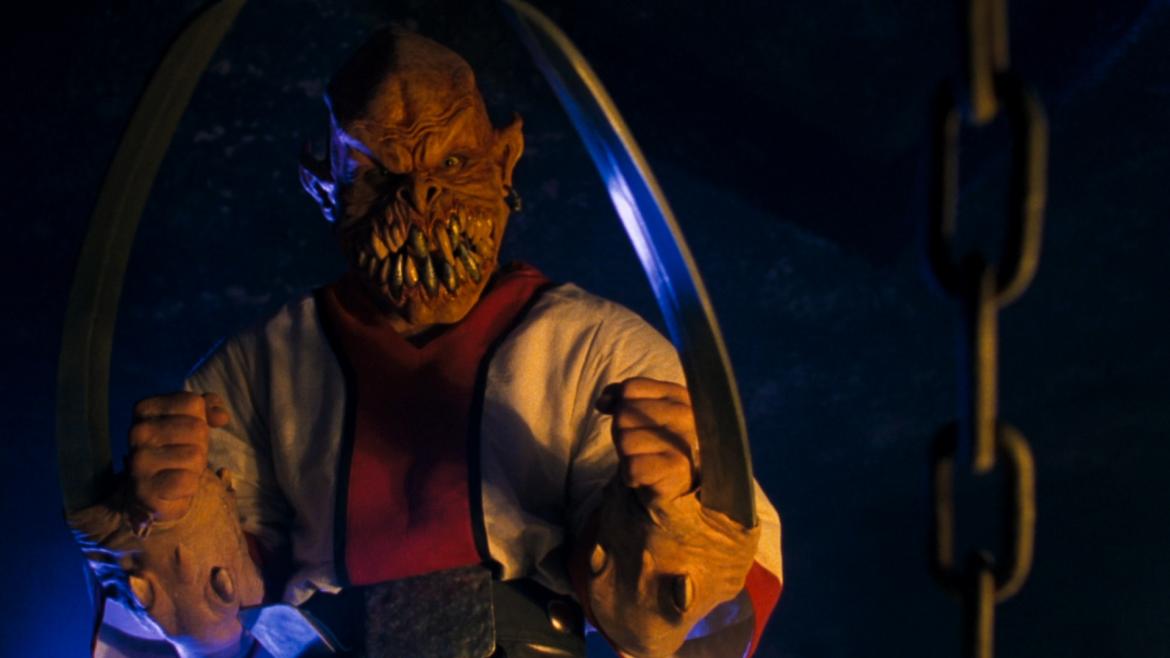 Burping CGI monsters, rubber robots, Z-Grade acting and animalities. Mortal Kombat: Annihilation is just one videogame adaptation and sequel that is so breathtakingly bad that it has to be seen at least once to be believed. About 15 minutes in and you'll be begging for the "Finish Him!" soundbite to echo in your living room a MK character to step out of the TV and violently rescue you from enduring the remaining 80 minutes.

For Annihilation to be considered worthy of the  "so bad it's good" label, one would need to make a case that there is anything remotely memorable to latch on to. We're talking quotable lines, baffling plotting and insanely awful performances that can be mocked at nauseam. Okay, done--this movie has ALL of that and more. Except, it sort of feels like it's doing all of that on purpose, which changes course from charming to obnoxious.

The movie picks up immediately after Paul W.S. Anderson's and it becomes abundantly clear from the outset what the viewer is in for. Several characters were recast and another is killed off within the first few minutes. Shao Kahn (Brian Thompson), the skull mask wearing gym bro, has broken the rules of Mortal Kombat and intends to take over Earth by merging the Outworld dimension with ours. Naturally, it's up to Lou Kang (Robin Shou) and company to shut that nonsense down lickity split.

The case was made that in spite of its flaws Anderson's Mortal Kombat was fun trash and that it is acceptable to roll around in that cinematic refuse--albeit for a short amount of time. The original was released in 1995 and Annihilation in 1997---and as quality goes it's like you've been rolling around in the MK stink for the entire duration of that release gap. Friends and family will politely stomach momentary lapses in bad hygiene, but Annihilation levels of odor are enough to justify disownment. Every aspect of the filmmaking process here is like stacking one rotten husk of offensive garbage on top of another.

When you break it down, so little effort seems to have been put into this movie that it goes from charming to obnoxious--completely shattering its chance to get the "so bad its good" label. The cheese factor is turned so high that the knob broke off and the actors seem like robots on overload with their heads about to explode--except for James Remar who seems so bored with it all that one has to wonder what dirt someone had on him to get him to agree to this. This flick doubles down on the shoddy Halloween costuming--just take a look at screenshots of Baraka and you can see the blades adhered to the actor's arms underneath a skin colored long sleeve shirt and a rubber mask leftover from the set of From Dusk Till Dawn. С ног на голову перевернет твой мир секс с женщинами с волосатыми кисками. Очень часто мужики тупо не могут сдержать себя, когда видят мохнатую манду. Приятно, что смотреть порно волосатых можно здесь без ограничений в хорошем качестве. И не забывай не только смотреть видео, но и лайкать, комментировать, и бросать ссылку друзьям.

There is a seemingly endless amount of material to pick to pieces that to do so would be overwhelmingly tiresome and a waste of everyone's time. Mortal Kombat: Annihilation doesn't even earn any sympathy points for any one aspect coming off as being accidentally bad. This doomed sequel was John R. Leonetti's first credit as a director--and through some evil trickery of Shang Tsung himself it unfortunately wasn't his last. By comparison, the original Mortal Kombat looks like a heady art film when compared to Mortal Kombat: Annhilation. If there's one ray of light guiding you through this trash fire its the again club-esque soundtrack that'll at least give you some beats to sync to while beating your head on the coffee table.

Godzilla: King of the Monsters