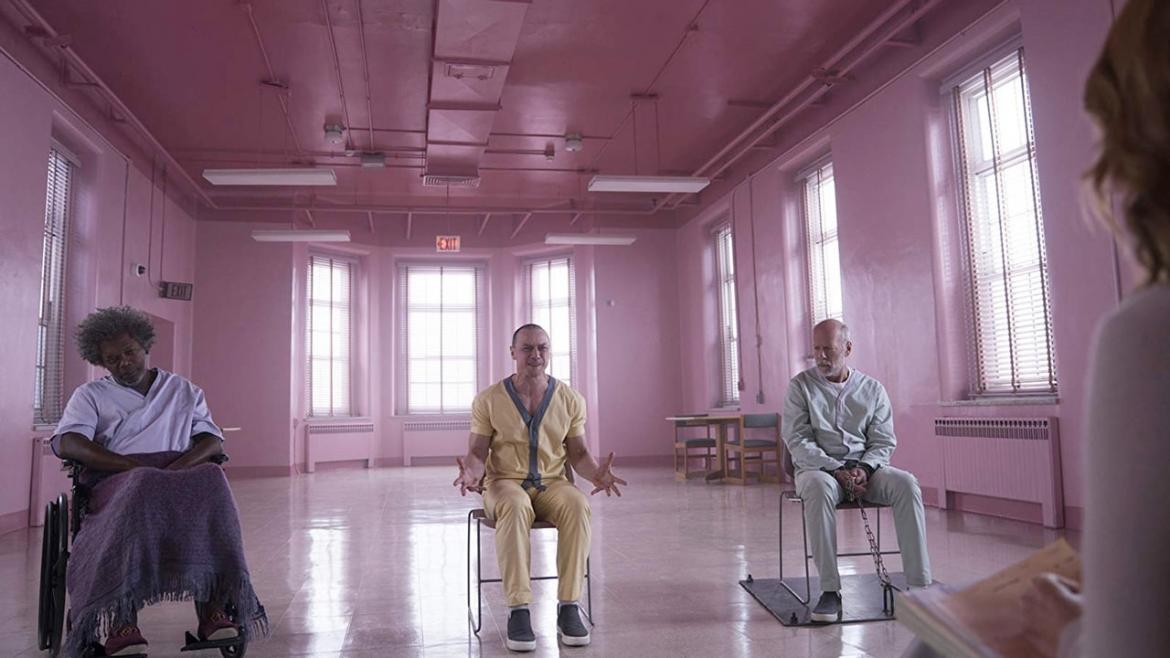 M. Night Shyamalan and the marketing departments behind his films have long usd the filmmaker's name to signal nail-biting twisty thrillers. Circa 2006, however, the appearance of the filmmaker's name began to provoke a different reaction. After a string of missed opportunities and dwindling returns to "Shyamalan" something could essentially be defined as having little or no comprehension to the point of being laughably bad. (You might even say I "Shyamalaned" that sentence). Either way, the filmmaker's career is a fluctuating graph of highs and lows extreme enough to drive even the most seasoned Wall Street broker to chug a bottle or two of Pepto Bismol. Regardless of where you emerge after the director's latest, Glass, it's bound to ruffle some feathers in spirited arguments related to its quality of lack thereof.

In 2000's Unbreakable Shyamalan was able to sneak a grounded superhero origin story to audiences by playing it off as his latest low-key thriller. With Split in 2016, he doubled down on his comeback tour by sneaking in a surprise sequel setting up a new villain to duke it out with the security poncho wearing David Dunn (Bruce Willis). Glass is the first in the trio to be billed as a true sequel with no real tricks to the marketing. The film picks up an undetermined amount of time after the events of Split where Kevin (James McAvoy) and his 24 personalities, typically referred to as "The Horde," remain at large while David Dunn and his alter ego, "The Overseer," has been trying to track him down. When they meet they find themselves surrounded by police, arrested and forced into a local psychiatric facility where Dr. Ellie Staple (Sarah Paulson) has been given five days to remove the delusion that they are super human beings before sending them off to their fates. However, the cunning occupant of the facility, Elijah Price aka Mr. Glass (Samuel L. Jackson) has other plans for his new roommates.

Shyamalan has been open about the fact that Glass, more so than the other films in the trilogy, was a concept he visualized back when Unbreakable was released. This leads to some of the film's more glaring issues. Most notably the film's thematic elements that would have been fresher if it been released much closer to the original. The concepts and frequent pauses to over explain superhero culture and ideals to the audience are stale and, to varying degrees, offensive to the intelligence of anyone who mildly considers themselves a comic book fan. To the casual observer of superhero media these sins are somewhat easily overlooked, yet it's the presentation, be it by script or by unusually pedestrian camerawork by Shyamalan, that tends to remove immediacy from several scenes.

Where Glass shines is once again in the many performances by McAvoy. Piled on top of his acting versatility are the emotional beats introduced in the relationship he has with one of his previous victims, Casey (Anya Taylor-Joy). Their bond through childhood abuse is surprisingly effective despite how little screen time it gets, but the few times Kevin actually comes to the light over his other personalities is some of McAvoy's best work. Jackson twitches through the first two acts and once he finally shows signs of life his arc too has some great emotional depth. The faulty wheel keeping the trio from ever taking off is yet another disinterested, lazy performance by Willis. Seemingly showing up just to collect a paycheck, the actor doesn't have much to contribute through most of the film. A lack of fisticuffs is no excuse for the anemic and bland line readings. Or perhaps McAvoy is just so good that Willis is rendered useless as a result.

Shyamalan seems to know that his Ace in the hole is the acting prowess of McAvoy and his shifting personas as the film spends a lot of time letting him spin circles around the rest of the cast. The last act has its ups and downs but rides high on the tension of Jackson's heady villain outsmarting everyone with the purpose of unleashing The Beast for a climactic battle. There's also an indie spirit to Shyamalan's overall goal, making a small film feel much bigger than it is with his unique spin on storytelling. Yet, the director can't help himself from trying to sneak in some form of twist that feels completely forced, though still somewhat interesting. Some of the themes behind his intentions could be read as a commentary on film criticism and it's tendency to undermine or remove what makes filmmaking special, but it also feels like the director is urging the audience to believe in the "magic of cinema" for indeterminate goals.

Glass is in an odd nexus of Shyamalan's catalogue of films. While not his most panned critically it straddles a line of genius and complete disaster in a way that only Shyamalan can do. More often than not the film wears its psychological thriller leanings on its sleeve while its superhero bits and teachings feel a little displaced and unfashionably late. Not the ideal way to wrap up the trilogy, but it's not the unhinged dumpster fire it absolutely could have been given its creator's want to "Shyamalan" himself.