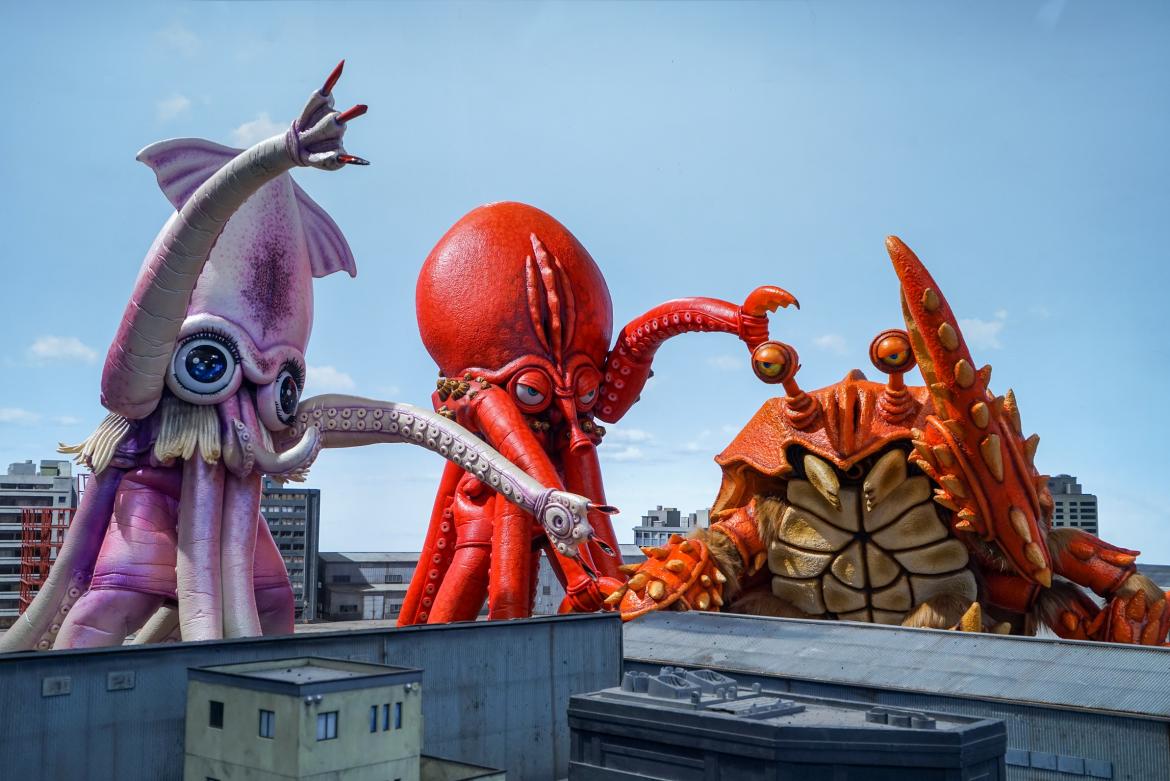 What if Godzilla had a show on the Food Network? Writer/Director Minoru Kawasaki answers that absurd question in Monster SeaFood Wars (2020).

The story begins with Yuta (Keisuke Ueda), an employee of his father’s sushi restaurant and former advanced biochemist (despite being in his early 20s). We see him bring offerings of seafood to a temple when they are abruptly stolen and end up in the Sumida river. The Octopus, Squid, and Crab turn into ‘mighty’ Kaiju that must be defeated by the Seafood Monster Attack Team (SMAT), composed of his rival Hikoma (Yuya Asato), and his childhood crush and unfortunate victim of a lazy love triangle, Nana (Ayano Yoshida Christie).

If you are looking for the message of man kind’s folly and the threat of nuclear annihilation enshrined in the classic Godzilla (Honda, 1954), this is not a film for you. If you prefer the campy charm of Destroy all Monsters (Honda, 1968) then this may be your bowl of monster ramen. Thinking about the movie for more than a minute will create logical inconsistencies that will leave your three Ghidorah heads spinning.

The film is shot with an overarching narrative framed by news reports that act as flashbacks. This allows for some clever jokes poking fun at Kaiju film logic (why do missiles not work on a giant squid -- they absorb them?) and a compelling way to frame a very rudimentary story. Some jokes are played for a little too long (going far beyond the rule of three), but overall the comedy is light and will strike a chord with Kaiju film fans and first timers alike.

It is difficult to critique the filmmaking on display as Kawasaki deploys a very campy and cheap looking style to humorous effect. Terrible CGI explosions go off on top of our characters and they are fine in the next shot. The tentacles of the octopus are superimposed over the image of characters driving to avoid what is clearly not in the same shot as them. There are some edits that jump and make the visuals choppy, but can you really complain about this when something is going for over the top silly?

There are major tone shifts in the piece that felt a little out of place -- shifting from pure comedy to social commentary on world hunger, and then back to comedy can be disorienting. The relationship between our leads, Yuta and Nana, is archetypal but terribly regressive, and there is a weird moment of slut shaming that brought a dour overtone to their childlike relationship. Weirdly the scenes between Hikoma and Nana displayed much more chemistry and the film undoes these scenes in typical hetero dynamics (let’s bet over a date with this girl without care for her desires).

The major drawback of the film is its gooey middle, where the narrative goes on a culinary sidequest to tell us that monster meat is good and everyone may be ignoring the problems that the monsters cause. I also would have enjoyed a less passive protagonist as our hero is mostly reacting and things resolve themselves independently of his actions. With a solid second pass on the writing and editing I would give this film a much higher rating -- but maybe I am just spoiled with tighter narrative films than the classic Kaiju flicks.

If you want to sit down with friends and have a laugh and/or a beverage then this Monster SeaFood Wars may be the 90 minute romp for you.