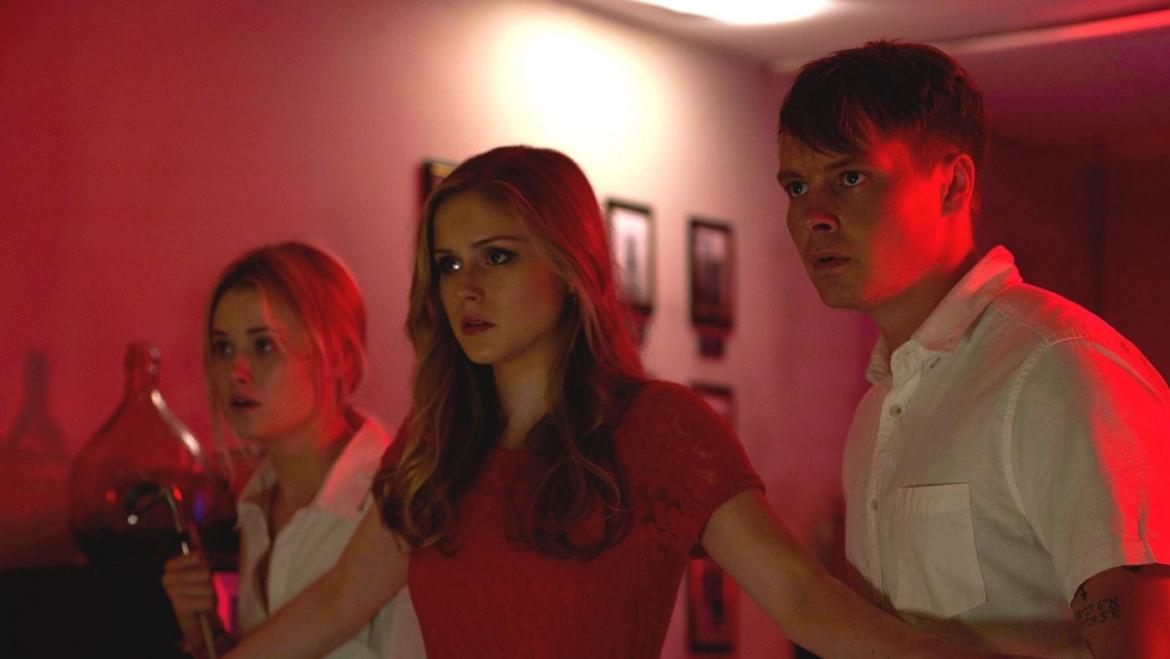 What if there was a group like Alcoholics Anonymous, but for murderers? And what if you, an outsider, accidentally went to one of their meetings? These are just some of the questions answered (or not) by 2018’s Monster Party.

The film follows a group of three  friends—Casper, Dodge, and Iris—who burglarize houses. Dodge and Iris are expecting a baby and trying to save up money to get their own place. Casper, lives at home with his (presumably single) father. When the kids go home after a score in the film’s opening, Casper finds that his father is being held hostage at a seedy strip club whose owner he owes $10,000. When Casper tells his friends about the situation, they decide that all they can do is try to pull off a big heist at the home of a wealthy family where Iris has worked as a server for catered events. They think their largest challenge will be disabling the omnipresent security cameras. Little do they know that the event they are catering is actually the annual “sobriety” celebration for a cult of semi-reformed murderers. Before they know it, they are locked down with the relapsing guests.

For a movie that was released at the end of 2018, Monster Party is full of actors viewers will likely recognize from various TV shows and movies. Our three teen heroes are played by Sam Strike (Timeless, Leatherface), Virginia Gardner (who played Vicki in David Gordon Green’s Halloween), and Brandon Michael Hall (from the TV show Search Party). The matriarch of the wealthy family is played by Robin Tunney of The Craft and her husband is played by Julian McMahon of Charmed fame. These, along with a few other familiar faces, are proof that the concept at the heart of this film is an interesting one.

In execution, however, that concept falls rather flat. The film’s tone oscillates wildly from gritty and sinister to downright weird. Scenes that are meant to play as tense often come off feeling quite a bit overwrought or weightless. The vigorous use of CGI blood certainly does not help. The film’s first kill is somewhat tense, but once things begin to go off the rails, the little good will the movie has garnered begins to fall apart. The motivation of most of the characters is uclear and the stakes feel incredibly low, despite innocent lives stake. When a weird mutant clown person shows up in the third act, only to be dispatched with in less than one minute, the film really hits rock bottom.

And if we could, for a moment talk about our protagonist. Casper is the member of the trio that we seem to know the least about. His only characteristic appears to be that he has a father with a gambling addiction. When things start to go down at the houe, he immediately leaves his friend Iris (who is pregnant) on her own. Even after he finds a gun and goes to find her, he is largely ineffective. He goes so far as to let her die trying to save his ass. At the film's climax, he goes back to the strip club to rescue his father, and he murders several of the women who dance at the club for good measure. There really isn't much there to hang your hat on.

All in all, Monster Party is a pretty “meh” excursion. It does have some interesting set pieces and one or two good kills and the saturation of the color palate, particularly in the film’s final act, is a nice touch. The performances are largely satrisfactory, suggesting that the film’s real weakness is in the screenplay and the direction. Even the cinematography, which has some interesting elements, and includes several shots that seem to evoke classic genre film, ends up feeling jumbled and mishandled.

If you’re getting together with friends, maybe to celebrate your completion of one year sans-murder, this might be a fun enough flick to pop in, but otherwise I would skip it.