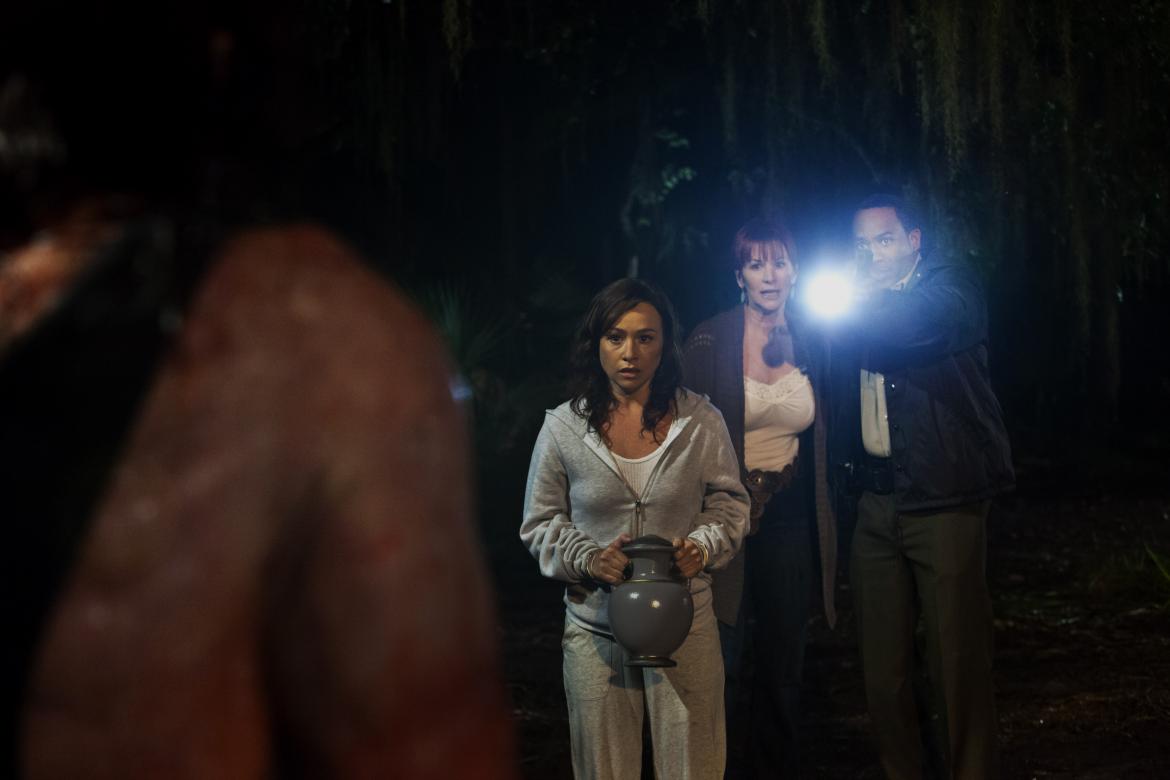 With the opening scene of the final film in the horror franchise, Hatchet 3 reminds viewers that there will be no shortage of blood, gore, and viscera in this installment. Much like the sequel before it, the film begins exactly where the last one left off. A blood-soaked Marybeth (Danielle Harris) is unloads a shotgun at Victor Crowley - leaving his face caved in and turned to pulp - but that stubborn guy won’t die and before long the two are tussling again. When Crowley falls on his own poorly-placed chainsaw, however, Marybeth retrieves what remains of his scalp and walks herself into the nearest police station.

When a team of police officers and medical techs make their way into the swamps in search of the crime scene, they stumble right into the killing grounds and make themselves targets for Crowley’s vengeful spirit. From here on out you get just what you expect from an Adam Green joint (though this is the first of the three movies he wrote but did not direct). There is, of course, the aforementioned over-the-top violence, backed up by the attention to and use of fantastic practical effects that many fans have come to love Green for. There are the horror greats that Green is able to enlist, not only Harris and Kane Hodder, who embodies her nemesis, but also Caroline Williams of Texas Chainsaw Massacre 2 fame!. And, of course, there is the frat boy humor that brings us great moments like a rookie cop hysterically pointing out a pair of testicles that are hanging from a tree when faced with the suggestion that this is some sort of elaborate prank.

But, there is also an irritating undercurrent of sexism that plagues many of Green’s films. From the start, the police lock Marybeth up for the killings, but not a single character misses the chance to point out incredulously that she couldn’t have done it, she’s a girl! As if that weren’t enough, we have our two primary female characters being almost entirely unable to interact with each other without arguing, sometimes seemingly about nothing! Amanda (Caroline Williams) is a local reporter (in the style of Gale Weathers, but far less endearing) who lost her job, and her marriage to the sheriff (the Scream parallels continue), over a story she wrote suggesting that the Victor Crowley stories were all true. Hell-bent on getting her credibility and her life back, Amanda tries to talk Marybeth into helping her kill Victor Crowley once and for all yet, despite their common goal, the two can’t seem to help but shout at each other.

All in all, however, Hatchet 3 is able to combine the joyful camp of the original with the increased budget of Hatchet 2 to astounding effect. With a huge cast of potential victims, this movie takes delight in coming up with a multitude of new ways for Crowley to do in his victims, and drenches the entire cast and set in mud and blood to do it. This movie feels a lot like the B-Horror monster movies that is sending up, with an infinitely higher yuck factor, and the effect is pretty glorious.