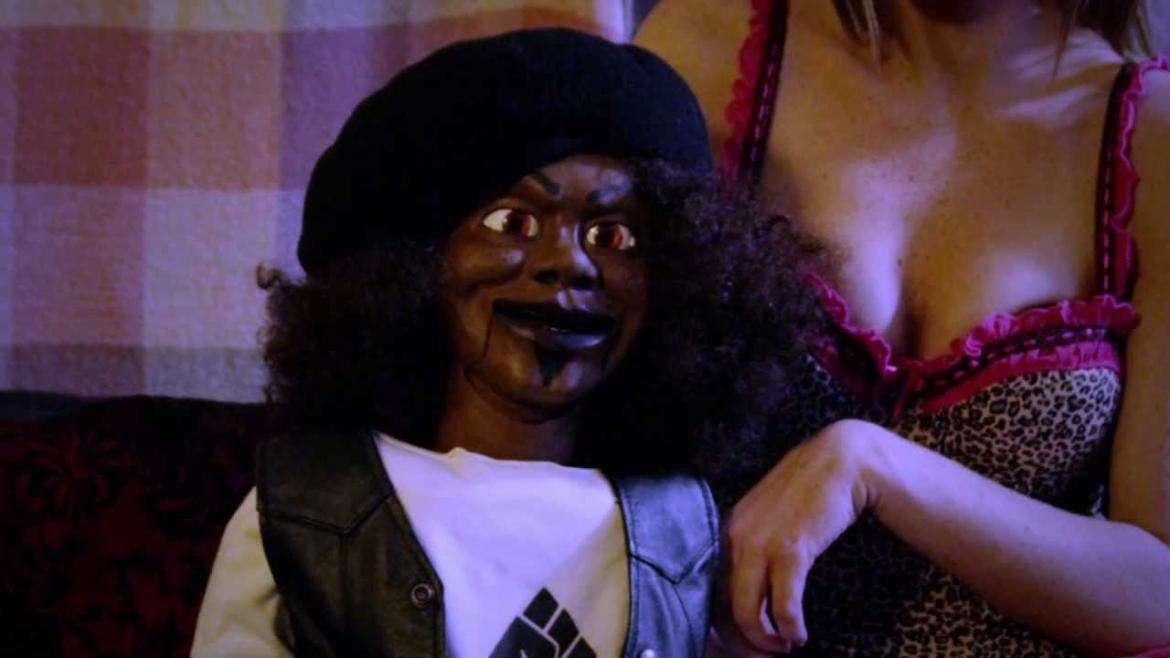 If you haven't seen "Black Devil Doll" (and you likely haven't), you've surely heard about it. Directed by Jonathan Lewis, and co-written by his brother Shawn Lewis of Rotten Cotton infamy, this film has been hyped for quite some time, yet very few people have been able to see it. I had a chance to catch a rare screening at this past weekend's Shaun Luu Horror Fest in Syracuse, NY, and I've been wrestling with my opinion since the credits rolled.

"Black Devil Doll," kind of has a plot, but as expected, that's of little consequence. After a night of boredom, the busty Heather (Heather Murphy) decides to fiddle around with a Ouija board that she had laying around her living room. Unfortunately for her, she timed her folly at the exact moment that a murderous black-power activist, Mubia Abul-Jama, met his crispy fate in the electric chair. His spirit finds itself in the body of a nearby ventriloquist puppet, which immediately takes on his likeness. After fighting off her initial shock, Heather comes to love, and make love, with her newfound wooden friend, and he convinces her to invite over some of her friends for some sexy fun... and of course, white girl murder. I would like to expound further, but I have literally just described the entire movie.

After a game of hot and heavy twister, Heather is given the signal to disappear so the doll can do what he does, which is kill and rape white women (in that order). Heather's friends then disperse into various parts of the house to engage in activities from napping to sunbathing, all of which involve nakedness. It is here that "Black Devil Doll" 'blows its load,' so to speak.

Reviewing a modern film billed as an homage to exploitation cinema can be extremely difficult. Mainstream film critics generally show extreme contempt for films like this, as well as people that love them. On the other hand, people that love films like this tend to view those critics as out of touch, overly serious, and tend to dismiss them outright. In the case of "Black Devil Doll," I find myself between those two people, and as much as it pains me to say this, I'm leaning a bit more towards the mainstream critics, but with good reason.

The most famous blaxploitation films have many things in common, but one of the most important similarities was timing. Meaning, films like "Shaft" and "Blacula" were written and directed in a time where the heat of the Black Power movement in the late 60's and early 70's lent an additional tension and power to the personification of the racial stereotypes. For that reason, the racial humor in "Black Devil Doll" not only falls completely flat in 2009, but without the aid of any wit or modern perspective, seems dated to a fault. I want to be explicitly clear here in saying that I was not offended by the bargain-bin racial humor in "Black Devil Doll" so much as I was shocked at how lazy and thoughtless it is. At the end of the day, this movie feels more like an X-rated "Malibu's Most Wanted" than the second coming of Blaxploitation/exploitation cinema.

Unfortunately, films like this can be immune to criticism. People may contend that I don't "get" this movie, but I actually find that I do, and that's why I can't enjoy it. Despite my desire to support independent cinema and shake my fist at big budgets and tight morals, I find that "Black Devil Doll" is nothing more than prolonged masturbation that loses its humor and impact when viewed through modern sensibilities. Although it doesn't seem that way, I'd be willing to forgive its misgivings if it were really over the top and genuinely funny, but I just didn't find that to be the case. Judging by various reviews and a shockingly high IMDB rating, it seems that this film might be for someone, but that someone is absolutely not me.

Kill or Be Killed