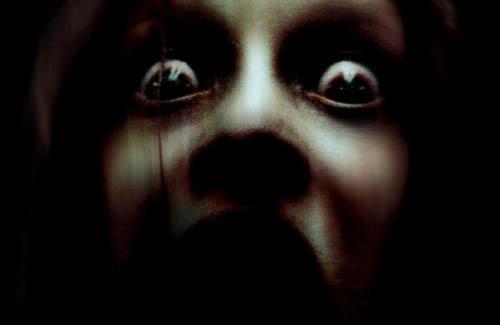 It's been just over two years since we lampooned "Mirrors" on the podcast, citing major failures in nearly every department. Except for Kiefer Sutherland's hilarious 24-esque peformance, there was almost nothing of note aside from a few tense moments and jump scares. With the way that the film was received, it would seem that there was no reason for a sequel, especially one that was lacking its only notable characteristic (Hint: It has a permanent 5 o'clock shadow). In 2010, the only thing stranger than the existence of a "Mirrors" sequel is the fact that it's not actually a sequel at all but a remake of a Korean film from 2003 called "Into the Mirror." (Note: The original "Mirrors" was also said to be a remake of "Into the Mirror" but Alexandre Aja denies it. "Into the Mirror" is included on the flip side of the "Mirrors 2" DVD) If viewed through the lens of the countless Asian-horror remakes of the early-mid 00's, "Mirrors 2" not only seems pointless, but about five years too late.

From the outset, this film feels very well worn. The protagonist Max (Nick Stahl, "Sin City") suffers the traumatic loss of his wife in a car accident, blames himself, and catches a bout of the "crazies." Once Max is finally able to tackle the outside world again he's given a job at his father's large department store, which is now home to the world's largest and most conspicuous mirror. Strange things start appearing in mirrors everywhere, and plenty of blood is shed along the way.

Even though the "mirror scare" is one of the most often used (and parodied) crutches in horror cinema, a skillful director can still mange to make audiences jump, even if they roll their eyes afterwards. Unfortunately, director Víctor García is more content to show the viewer something in every damn mirror that shows up on screen, removing the mystique of the one thing that's supposed to remain scary throughout. This all give, no take approach to horror directing makes "Mirrors 2" a very boring film, bolstered only by the one aspect that outshines its titular predecessor: the gore.

From the first moment that a mirror takes on a life of its own and attack's the reflect-ee it's obvious that García wanted "Mirrors 2" to be a film that's far more visceral than psychological. To that effect, there are a lot of well done practical effects, and creative sequences that stretch those effects just as far as they can go before needing to go the computer-generated route. The two main death sequences are about the only noteworthy things to take away from the film, and not just because Christy Romano of "Even Stevens" and "Kim Possible" fame is wet and naked through 90% of one of them. Aside from the standard-issue "dead girl in a mirror" shenanigans, the effects are used to such great effect it seems appropriate that his next film will be the the straight-to-DVD "Hellraiser: Revelations."

Once the two main gore scenes are out of the way the film backtracks in a major way, using lengthy flashbacks to explain how the dead girl in the mirror ended up there in the first place. In short, the sleazy higher ups (two of which are dead a this point) took advantage of a new hire by drugging, raping, and accidentally killing her, and she's taking out her revenge one mirror at a time. The story itself is not any more far fetched than any other Asian-inspired ghost flick, but the ass-backwards way in which its told totally throws the experience off. It's a lot like watching the final field goal in an important football game, and then rewinding to experience every boring step that led up to it.

Remakes and sequels are here to stay, but "Mirrors 2" doesn't even seem to try to justify its existence in any tangible way. The amped up-gore makes it a more interesting film than its predecessor in parts, but 10 meaty minutes are not enough to have genre fans clearing off their already-cramped DVD shelves for this film. "Mirrors 2" is a puzzling too-late sequel to a throwaway too-late Asian horror cash in, and succeeds in very little other than brief satisfaction for gore hounds and spank-fodder for the type of people that wait for Disney channel actresses to grow up.

Scary Stories to Tell in the Dark