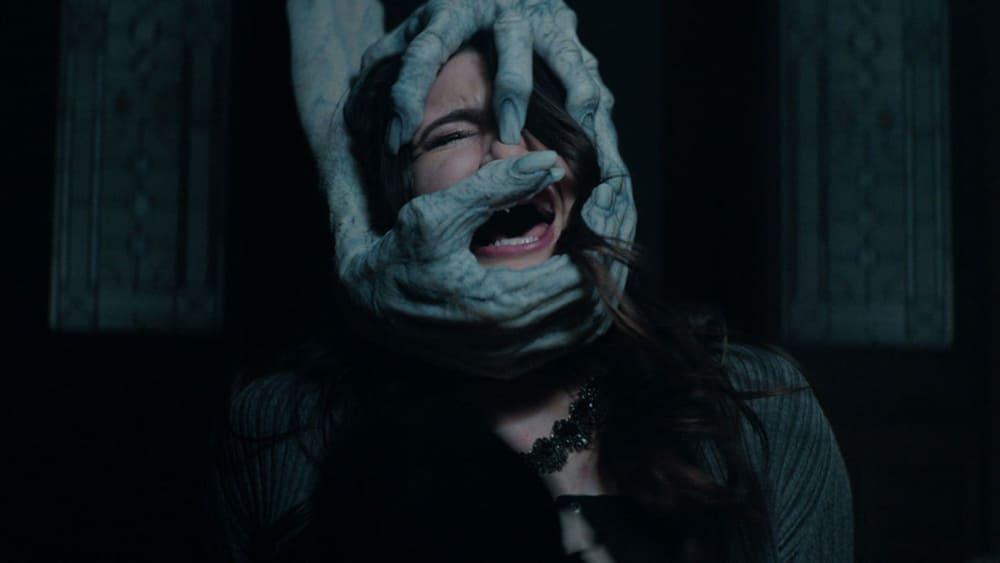 Lars Klevberg's Polaroid was shelved for over 2 years following the Harvey Weinstein scandal (leading to a recent conviction) which resulted in the collapse of The Weinstein Company and the reshuffling of its subsidiaries. Now available domestically on streaming platforms we’re finally getting a look at Klevberg’s remake of his short film. Armed with all the presumably relevant SEO terms in the script, Polaroid drops lingo it assumes will appeal to the millennial target audiences from Urban Outfitters and Creepy Pasta. Yet, its attempts at building a coherent narrative from a mythology that can't be picked apart lead to nothing more than transparent specters of ideas.

The film follows Bird (Kathryn Prescott), who we're to believe is a social outcast and loner who classmates call "Scarf Girl" in passing whispers. Why? Because she wears scarves to cover a scar on her neck (way to be creative high school kids). While working at a local antique shop she's gifted an old SX-70 polaroid camera. When the camera is used to take a photo the developed film shows a mysterious shadow in the background and shortly after the subject is mysteriously killed. After Bird takes a picture of a group of friends it's a race against time to uncover the mystery of the camera before each of her friends are picked off one by one.

Original? No. There isn't a single original pixel contained in Polaroid. It's an amalgamation of a long gestating horror trope including the very 1990s kid versions of the Are You Afraid of the Dark episode "The Tale of the Curious Camera" and R.L. Stine's “Say Cheese and Die!” There's nothing damningly wrong about treading old ground, but the filmmakers’ insistence in following tired jump scare techniques and nonsensical writing make Polaroid inherently forgettable.

Klevberg chooses to play every second of the film dead serious and as a result character choices and dialogue are laughable to the point of parody. For instance, a character sets a photograph on fire in an attempt to prove it has no supernatural influence. Once the flame reaches another character's arm in the photo, that person’s arm bursts into flames and is resistant to attempts to put it out until the flame is extinguished on the picture. At this point the photograph returns to pristine condition. Later when facing police the teens explain, with utter earnesty, that a picture (or ghost therein) is trying to kill them. The group is dismayed when they are not believed, but they make no attempt to prove their claim though they have the means to do so. The entire movie is a series of actions that could easily be explained away or solved, but Blair Butler's script continuously and hilariously just brushes them off by contriving scenarios that do nothing but ensure we keep the teens under the murderous thumb of the malevolent photography obsessed ghost.

The tragedy of it all is that Klevberg is clearly a talented filmmaker capable of orchestrating an engaging cinematic look even when the odds are stacked against him. Polaroid looks better than it has any right to-aside from some horrid CGI. Many of the set pieces are impressively staged and feature eerie sound design, but culminate in every predictable jump scare you can possibly imagine.

Polaroid is a classic example of a movie that seems to have only been green lit to boost a studio’s bottom line by grabbing some quick cash before fading from memory. Polaroid is the bloated bed head glimpse of yourself you get when you open your camera, forgetting it was in selfie mode. Like the outdated photography itself, this is a film that would have been best left on the shelf to collect dust.