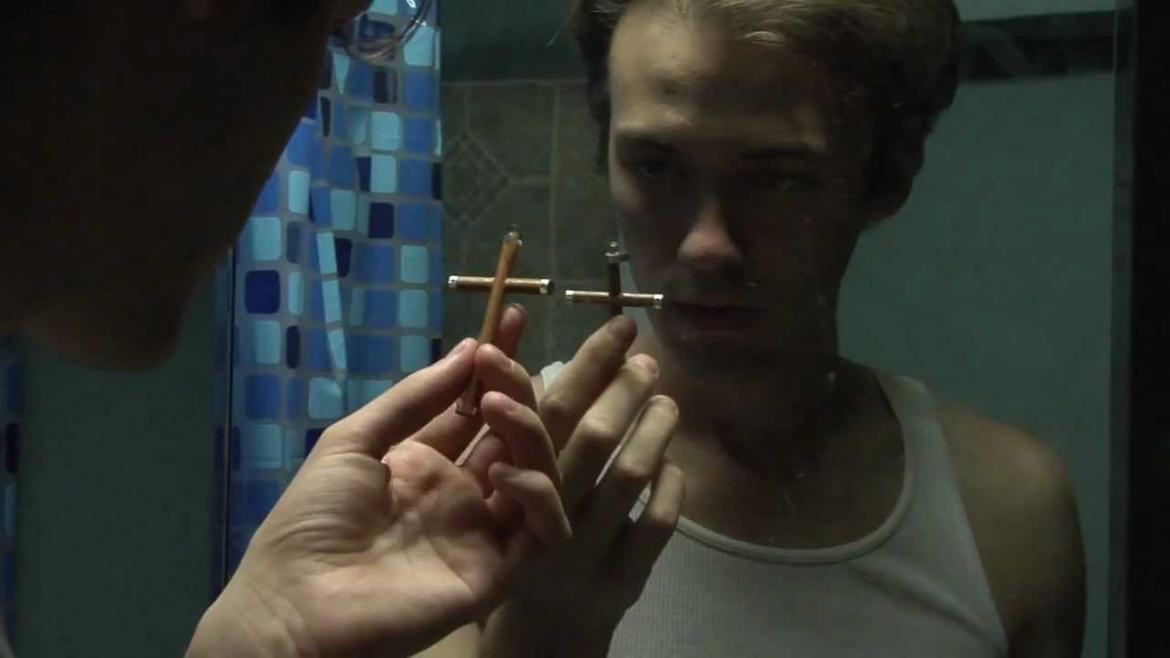 Movie fans are the worst sometimes, plain and simple. Some of us complain if movies explain too much, other's complain if they don't explain enough. No one person is cut from the same genetic material and everything sits in our brains differently than the next person. What does any of this have to do with Scott Leberecht's debut film, Midnight Son? Nothing specifically except that this slow burn slice of vampire shenanigans is certainly not everyone's jam and outright refuses to hold anyone's hand en route to finding appreciation for its quirk.

At the ripe ol' age of 24 Jacob (Zak Kilberg) is going through some changes. We're not talking male pattern baldness, no, Jacob is having some serious stomach pangs and food just isn't doing the trick. He always knew he was different, having extreme sensitivity to sunlight, so his job as an overnight security guard has allowed him to live somewhat normally- but a sudden craving for blood begins to complicate his life. Things don't get any easier when he meets Mary (Maya Parish), a bartender with a cocaine addiction, and he falls in love. Jacob eventually runs afoul with a back alley blood dealer, Marcus (Jo D. Jonz) which threatens his world even further.

Midnight Son is something of an acquired taste. It often draws warranted comparisons to George A. Romero's Martin, but Laberecht's modernized twist on the vampire genre grows on you almost as slow as the film's pace. It does however lack the modern aesthetic to go along with its updated lore. Leberecht has opted for a grainy and gritty look which lends to the film's more realistic setting and approach. Understated performances fall right in line with the sense of realism as no one here is looking to play up the theatrics.

Given the obvious low budget and commitment to a more realistic feel the film steers away from doling out the blood in buckets, though there are short bursts of troubling violence in the finale. The strength of Leberecht's script lies within the awkward chemistry between Kilberg and Parish- an on screen romance bursting with complication. Around every corner surfaces another road block for the two star-crossed lovers to overcome at times bringing the characters themselves to doubt if they are meant to consummate their warm fuzzies for each other. Additionally, the film's themes of addiction play heavily throughout and provide an effective through line between the characters.

Midnight Son is a film that lingers, not because it's shocking or because it's a challenging experience, but because there's just something about it that begs to be noticed. There's nothing that smacks you in the face and forces you to pay attention- not the look, not the performances, and not a finale that sticks with you for days. Still, there's a combination of all those things that triggers a feeling that Midnight Son is a film worth exploring. It might not all sink in at once, but one day you might just find yourself thinking that Leberecht as a first time director was on the verge of something truly great.