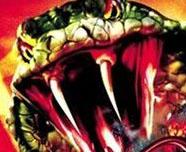 Just look at that title…MEGASNAKE. It kinda says everything, don’t you think? You know that going into this, you’re not only going to see a snake, but a snake that is bigger than average, thanks to the “mega” prefix. And only one place would so proudly put that word before any type of animal…you guessed it: the Sci-Fi Channel. Is there anything they can’t, or won’t, do?

MEGASNAKE opens with Christian fundamentalist snake-handlers doing what they do best—handling snakes. Now I know most people find this religious sect to be, you know, kooky, but I really admire them. That is a religion that is all balls, second only to extreme Islam. To not only handle deadly snakes and dare them to bite you, but then to gulp down some strychnine, sorry, but you’re a fucking badass. Do you guys have any pamphlets I could look at, per chance?

Anyway, so one of these snake-handlers happen to be the father of two boys, Les and Duff, and, wouldn’t you know it, he’s bitten right upside the head by one of these things. Flash forward twenty or so years later and Les is a fine upstanding paramedic, completely traumatized by the snake-biting situation, while bro Duff is snake-crazy, following in daddy’s footsteps. It’s in his search for poisonous snakes that he meets a biker-tattooist who, even though he seems totally modernized, is a Native American written by white dudes, so automatically he talks like Tonto.

His name is Screaming Hawk and he keeps in a jar the sacred bane of the Indian people, the not-so-mega Unteka. Now according to legend, once loose, this snake will become big. Giant. Mega, even. The owner must follow three simple rules when caring for it, but it doesn’t matter because Unteka is not for sale. (Why this scene didn’t take place in a basement curio shop in Chinatown is beyond me.) Duff, having an insatiable need for snake, eschews these warnings and promptly steals the jar, and then even more promptly, breaks the damn thing, letting the snake loose.

As the Unteka feeds, first on chickens and then on mom and Duff, he grows and grows, eventually reaching over forty feet. That’s pretty mega, right? It slithers up and down the Bulgarian, um, I mean Tennessee country-side until it comes upon a picturesque carnival where the special guest is “real-life” superhero Feedback, whom you may not remember as the winner of the Sci-Fi Channel’s WHO WANTS TO BE A SUPERHERO. You kinda expect Feedback to spring into action, but instead he merely gives a crowd of kids some tips on dealing with downed power-lines and pretends to kick the megasnake while shouting “Prepare for some Feedback!” He then runs away screaming.

More like WHO WANTS TO BE A SUPER-PUSSY, am I right guys?

When MEGASNAKE premiered on the Sci-Fi Channel, there was a big to-do among Feedback’s “fans” because Sci-Fi promoted it as “starring” the electrical superhero, when in fact he’s only in it for thirty seconds and even worse (or better, depending how you look at it), makes him look like a douchebag. Online, he’s organized a petition for Sci-Fi to make an actual Feedback movie, something that given their previous superhero outings (oh, you must check out STAN LEE’S LIGHTSPEED!) I would kill to see. I’m in your corner, Feedback!

Back to the movie: using ancient Native American wisdom and talismans, the gang eventually defeats the Unteka by crawling inside him and punching their way out, which is exactly what I would have done, being part Choctaw and all.

Filmed on location in Sofia, Bulgaria and using a cast and crew that has more Z’s in their name than I get with a goodnight’s rest, the locales actually do resemble backwoods America quite accurately, but it gives itself away any time a non-principal actor opens their newly dubbed mouth, allowing hilarity to ensue. This is especially entertaining in the case of the two middle-aged backwoods coots who try to fire flame-throwers from a moving truck at the megasnake. And yes, it’s as awesome as it sounds.

Finally, I know what your big question is: just how does that megasnake actually look?

Well, I think it can be best described like this: 010010110111011. It’s all CGI and it’s all crappy, but hell, a digital megasnake is still a megasnake, and if you ask me, that’s better than no megasnake at all. That would be mega-lame.