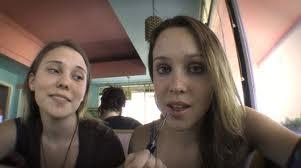 “Megan is Missing,” written and directed by Michael Choi, is a horror film that wants so desperately to be something more. It wants to be an exposé of today’s youth in America and a wakeup call to parents. It wants to be an important statement about our society and the risks inherent in young girls having too much exposure to the Internet and too little supervision…

I’m sorry, I’m not buying it. “Megan is Missing” is just another exploitation film, and not a very good one at that. It’s a dull after-school special followed by about 20 minutes of “A Serbian Film.”

The film’s story is told found-footage style, a collection of video diaries and Internet chats. It tells of two young teenage girls who could not be more different. 14-year old Megan (played by Rachel Quinn) is outgoing, a party-girl with a rocky past (she talks of being molested and tells a graphic story of giving oral sex at the age of ten). Her 13-year old best friend Amy (played by Amber Perkins) is sweet and virginal, loved by her parents but picked on by classmates. One day Megan tells Amy about a new boy she met online, Josh. She goes to meet him, and disappears. Amy then reports this to the police and she also turns up missing.

All these scenes are just a prelude, however, to the last 22 minutes of the film. In a moment of plot absurdity, the kidnapper leaves behind a camera and film that are found by police. On that video we find out what happens to both Amy and Megan, and “Megan is Missing” turns to the most extreme type of exploitation horror. We see a young girl being degraded, raped, and more. And by the time we finally “find” Megan, we’re too numb to be shocked.

Before discussing the supposed “message” of “Megan is Missing,” I should mention that this is a flawed film on just about every level. The conversations between the girls are inane and insipid. With the exception of Quinn and Perkins--who give very brave performances-- the acting ranges from wooden to embarrassing. Worst of all, at the end of this film we are subjected to a scene showing nothing but a man’s feet as he digs a hole in the dirt. This scene lasts more than ten minutes (no, I am not exaggerating).

In addition, there are major plot holes and leaps in logic. After Megan goes missing, for example, why does Amy wait four days to report what she knows about Josh to the authorities? Why do the police parade her in front of the press after she makes her statement? Why wouldn’t her parents do more to protect her after finding out there may be an Internet stalker that she reported to the police?