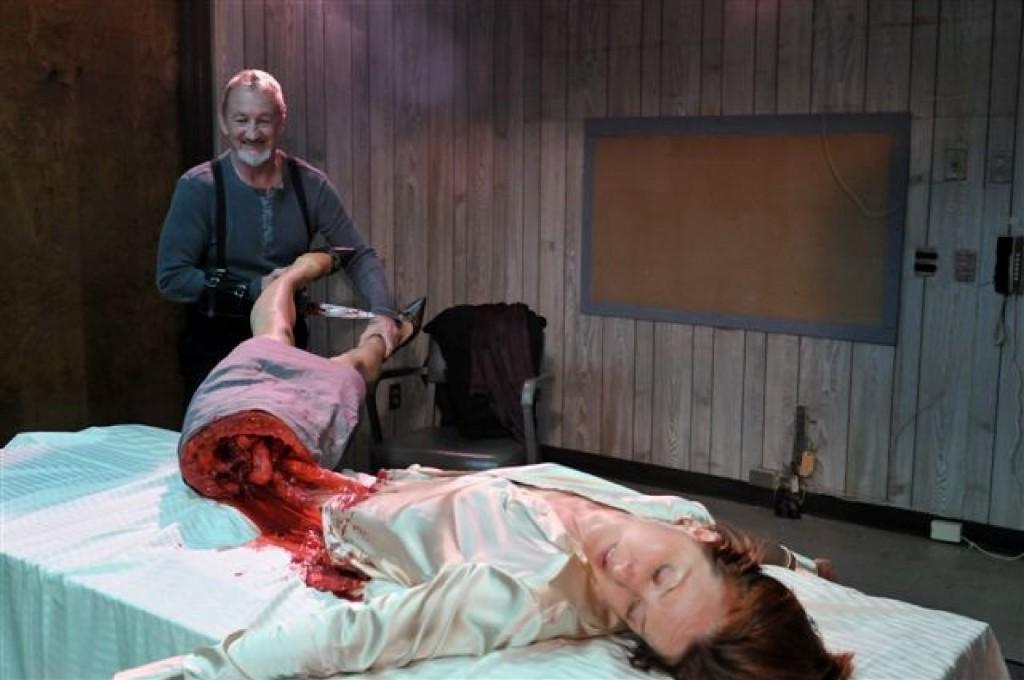 Scoring an iconic actor for your low budget film serves as a double edged sword. A noted presence with an accomplished resume lends instant credibility to your production. The flip side is his presence can serve as a reminder of your own production doesn't hold up to his or her salad days. Such is the case with Glenn Ciano's “Inkubus”, a new slasher with Robert Englund in the title role. Englund's spirited performance elevates the material, but can't detract from the film’s flaws.

“Inkubus” is told in flashback by an institutionalized detective Tom Caretti (NSYNC's Joey Fatone, who also served as producer). When cops drag a young man drenched from head to foot in his girlfriend's blood into their station, he gives them the “one armed man defense”. A shadowy figure appeared in his bedroom out of nowhere, beheaded his man's lover then leapt with her head under his arm out the window to the pavement five floors below. Having heard a variation of this story a million times before, the cops greet his story with skepticism and derision. That attitude changes in a hurry when Englund strolls into the precinct, deposits his victim's severed head on the floor and calmly surrenders.

He claims to be an Inkubus, a centuries old demon responsible for murders as far back as The Black Dahlia and Whitechapel. He wants to draw out retired Detective Gil Diamante (William Forsythe, the man who came closest to catching him fifteen years before and paid a high personal price because of it. Once Forsythe arrives on the scene, “Inkubus” turns into a game of cat and mouse with the demon toying with the fragile man's psyche while maneuvering the hapless police around like pawns. It's not too long before body parts stack up like cordwood and the younger detective realizes he's in way over his head.

Robert Englund's performance as the titular Inkubus serves as the film's highlight. It's a role cut from the same creepy cloth as Freddy, except this time Englund doesn't have to hide himself under layers of makeup. The demon has a disconcerting habit of being everywhere yet nowhere at once and Englund once again takes great joy in verbally manipulating his prey. Unlike the pun obsessed Krueger that spouted one liners between kills, Inkubus is more concerned with planting seeds of fear in his victims minds, then letting the burrow deep until they're left as mental jellyfish powerless to avoid their inevitable doom. Englund still has that sparkle in his eye that demonstrates how much fun he's having with the role, and it goes a long way towards making “Inkubus” watchable.

There's some odd casting going on here. It's not every day you see a founding member of the formerly largest boy band in the world turning up in a low budget slasher looking a bit doughy and rumpled. Fatone acquits himself well even if you can't get the chorus from “I Want It That Way” out of your head when watching the movie. In another bizarre casting move, 1980's sitcom mainstay Jonathan Silverman turns up as a twitchy bundle of nerves cop that can't hide his queasiness from the others. Unfortunately genre vet Forsythe always seems to come up short with matching the intensity he brought to his signature role of Sheriff Wydell in The Devil's Rejects. He sleepwalks through much of his role. While you can attribute some of this to the way the role is written, you can’t help but believe Ciano had an idea the two would be locking mental horns. Forsythe just isn’t up to the task.

The flaws of “Inkubus show themselves in the form of it's mostly single setting location and a story that tries to throw too much against the wall without a payoff. Setting all the action in a police precinct becomes a hindrance when you realize just how bland a setting the place is. There's just nowhere for the characters to go so the script calls for them to do goofy things like split up and comment that they've never seen certain stairwells or passageways before. The idea is the inkubus is manipulating the settings, but this becomes a crutch the film relies on far too often.

The precinct setting feels drab and flat and during the slower portions of the film I felt my attention start to wander. There's an over reliance of saying “it's magic” whenever something unbelievable happens, yet the grizzled police force vets barely blink an eye when Englund's character disappears into thin air with a snap of his fingers or slips in and out of his constraints with less effort your or I would need to button a pair of shirt cuffs. Ciano tossed in many “wouldn't it be cool if?” moments without much thought to how characters in the real world would react or even if these actions make a lick of sense and drive the film forward. By the time fifth or sixth the phrase “It’s MAGIC” pops up to explain what’s going on, you’ll have to strain yourself to not roll your eyes into the back of your head. One saving grace of the film is the practical gore. The FX work is top notch here with some creative kills, including a grisly nod to Indiana Jones and the Temple of Doom except with a spinal column getting ripped out instead of a heart.

Overall Englund’s performance, the gore and the fact that “Inkubus” is at least trying to bring something new to the table lift it a notch above most DTV fare. Ciano has some talent, and I’m looking forward to what he brings to the table with future projects.