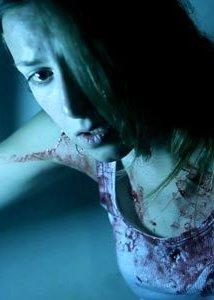 I can’t really talk about this movie without spoiling it, so if you have any interest in watching "La Casa Muda", or the 2012 remake "Silent House", which I am guessing are fairly similar, I’d suggest not reading this review before you watch the film.

Lauren, played by Florencia Colucci, and her father stay the night in an old house, so they can do some repairs in the morning, to get the house ready to be sold. Lauren hears a noise upstairs and her father goes to investigate but is killed. Nearly the entire rest of the movie is simply following Lauren around, as she walks around the house with a lantern looking at things and trying to open locked doors. She spends a lot of time staring at things like Polaroid cameras, books, and radios that turn on mysteriously. The long and short of the movie is just her hearing noises and either trying to find where they are coming from or trying to escape the house.

As light on plot as La Casa Muda is, it is surprisingly effective at creating some very tense atmosphere. I was skeptical about the “continuous take” approach which seemed to be the main selling-point of the film, but I was pleasantly surprised to find that this was a lot more than just a gimmick. The entire movie is done without any visible edits so it gives a genuinely very claustrophobic feel to the movie. While Lauren is stalked in the house you never see beyond the light of her lantern and are subsequently trapped with her and wondering what the noises in the house are.

Normally in a movie like this you would have several exterior shots, and maybe a few aerial shots, and then once inside the house you’d get a lot of closeup cuts of things like dripping water, the faces of dolls, and maybe some insects or something like that. By getting rid of all those types of shots the audience is trapped inside the locked house along with Lauren, and the director is able to tap effectively into a fear that most people share: walking around a strange building in the dark.

Although this is very effective the movie basically does nothing but this. The audience stays nervous the entire time because they are waiting for something to pop out and attack protagonist which will scare them, but basically nothing ever happens. It is impressive to build and sustain this type of tension, but without a satisfying pay-off it feels like a cheap trick. It's as if the director basically just drags out the moment when you know something scary is about to happen for eighty minutes, without anything scary actually happening.

Spoiler warning... For me the worst thing about this movie is the twist ending. I am not a fan of twist endings because I feel like it usually means there was no story there to begin with. This seems to be the case with "La Casa Muda". Lauren is pursued by a murderer the entire movie but *twist* she was the killer the whole time! It's not much of a twist to base an entire movie around. Plus I’m guessing this plot twist was cannibalized from “High Tension,” and I didn't enjoy it in that movie either.

I will admit however the way the audience is tipped off to the identity of the killer was pretty inventive. Lauren runs outside the house and the camera points ahead of her, it swings back and shows Lauren to the right, points ahead, and swings back quickly and shows Lauren to the left this time, hinting she might possibly be standing in two places at once, and therefore has split personalities. It is one very clever moment in a movie without much else.

I enjoyed "La Casa Muda" right up until the ending. It is shot very well, and has good atmosphere. When it was over I felt like it only lasted 50 minutes instead of a full 90 which I think is pretty impressive considering a solid hour of the movie is just Lauren walking around staring at things and looking scared. However it has some pretty glaring flaws and I wouldn’t really recommend it to anyone. Plus if you know anything about it at all before you see it the movie is already spoiled because there is so little action.