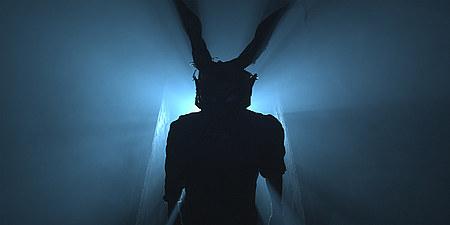 Richard Kelly's "Donnie Darko" is sort of a tough nut to crack. In a matter of 8 years it has risen from the ranks of almost completely neglected, forgotten cinema, to revered cult classic. It was also one of the first films in my recollection to really harness the power of the internet to make its name and spread among fans. In doing so, the hype the film has received has seemed to create something of a backlash, and in today's cult cinema landscape, you're just as likely to find someone who will tell you that it's overrated as you are a die-hard fan. As with most films this strange and open-ended, that debate is understandable, even expected. Despite all of the disagreements, it seems the one things fans and non-fans alike seem to agree on, is that the last thing in the world "Donnie Darko" needed, was a sequel.

It's a sentiment that Richard Kelly, writer and director of the first film shared as well, and why he refused to have any involvement with this production. I wasn't able to find any concrete answers as to why he wouldn't be involved, but it's not even necessary to see the film to figure out why. This low budget, direct to DVD sequel shot on state of the art "Digital Red-One" cameras smacked of low-rent from the first publicity shots that showed up online. Now having seen the film, it appears those fears were well founded.

"S. Darko" follows Donnie's sister Samantha, played by the now grown-up Daveigh Chase, who is reprising her role from the original. Samantha, racked with emotion and pain from her brother's untimely death and its effect on her family, has ran away with her friend Corey (Briana Evigan) and the duo have found themselves broken down in what appears to be the rural Southwest. While there the two check in to the local sleazy motel, and quickly make friends with Randy ("Gossip Girls" Ed Westwick), the local James Dean wannabe who offers to help fix their car. Along the way they become familiar with the other strange charactes this town has to offer, such as the religious freak Trudy (Elizabeth Berkley), and "Iraq Jack" (James Lafferty). Jack is a retired Gulf War veteran (the film is set in 1995), who is having similar visions to Donnie, and spends his days up on a local windmill, presumably waiting for something profound to happen.

They begin toying with the mythos from the original film pretty early on, and it's clear that that they're playing it fast and loose with the rules. Samantha, plagued with the same sleepwalking issues that Donnie once had, appears to Iraq Jack in the middle of the night, complete with demon voice and funny looking horns sticking out of her head. She warns him of the impending apocalypse, and helps him slip through a wormhole in order to avoid the oncoming meteorite that is about to strike his perch.

Samantha seems to be wholly unaware of what she is doing in her sleep, or all of the time traveling that's going on around her. Whereas in the first film we build up slowly to the big time travel reveal at the end, here traveling through time is treated with no reverence whatsoever, with several different main characters slipping through wormholes at a few different key points. Also, instead of having one "Frank the Rabbit" bringing bad news to those around him, several different characters get to take over the role of soothsayer. Fans of "Donnie Darko" who have made it this far are no doubt scratching their heads.

What I just described is really indicative of the larger problem here. Despite the filmmakers' many interviews where they profess to be "huge fans" of Kelly's original film, they show a clear lack of understanding as to what made "Donnie Darko" so compelling in the first place. Instead they latch on to overt themes and devices from the first film; time travel, Frank the bunny, fate, the essence of reality etc, and paint them across the screen with such broad strokes it's almost embarrassing.

The aesthetic used to do so can only be described as "music video-like", with long, slow motion tracking shots set to music taking the place of anything that might actually be profound. A more apt word in this case would be "pretentious". And while the picture, achieved with the latest in digital video technology is impressive for what it is, many of the effects are unbearably awful.

The situation is not helped in the least by Daveigh Chase's performance. It's great that they were able to snag a returning actor and mold the story around her, but once you hear three words come out of her mouth it becomes painfully clear why she was the only one willing to return. Her delivery is so wooden, so devoid of any emotion, that you really start to consider if it's embarrassing for Elizabeth Hurley to appear in this piece of garbage. And really, can you think of a better insult than that?

The sad part about all of this is, had Richard Kelly decided that he wanted to do a sequel, the basic gist of what is going on here is a great place to start. The American Southwest has endless visual possibilities, and since Maggie Gylenhaal obviously wouldn't agree to come back, basing the film around the Samantha character also makes a lot of sense. Unfortunately those responsible for this sequel made a really misguided, boneheaded decision.

Fans of the original film are sure to avoid this altogether, and if they do decide to watch it they are going to be royally pissed off. People who aren't familiar will most likely also avoid, and be similarly pissed if they watch, considering they will have no idea what's going on. That will only put them at a slight advantage over fans, who now have the unfortunate burden of having to somehow assimilate this film into their beloved "Darko" mythos. What they'll find if they attempt to do so, is an aimless, humorless, witless sequel that doesn't deserve the name which it claims. Sure it's what most of us expected, but I don't think anyone will be celebrating being right on this one.