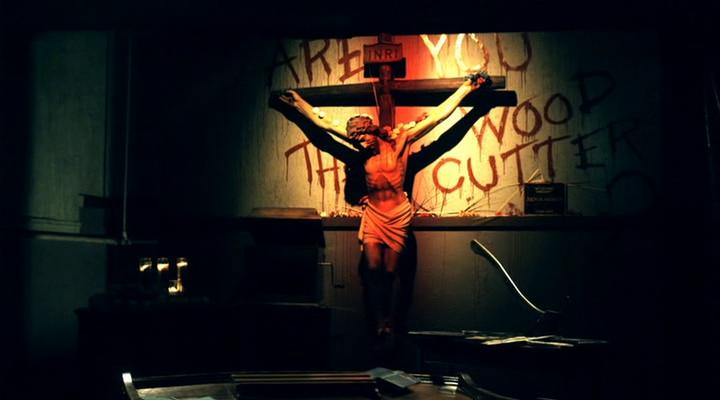 The Red Riding Hood story is rife with history. Originally a pan-European folk tale the evolution of the story has featured some pretty interesting revisions throughout time. One significant change to the story happened when Charles Perrault, the first person to commit the folktale to the written word, decided to refashion it into a heavier morality play, specifically one that cautioned young women about the dangers of a slackened grip on their virtue. The tale continued to evolve in the hands of others eventually becoming the Brothers Grimm story that most of us are familiar with today. Interestingly, the biggest changes through time have been to the Red Riding Hood character herself and her fate at the hands of the wolf. The titular damsel has gone from escaping the wolf by her own device in the early oral traditions of the story, to being eaten alive without deliverance in Perrault’s version, and finally to being rescued with her grandmother from the wolf’s belly by the friendly woodcutter in later versions. I would hazard to say that the woodcutter version is the most overtly patriarchal and arguably the most moralistic telling of the tale. It is one that envisions Red as a guileless innocent naively endangering herself and her family and ultimately requiring rescue from the dark belly of the wolf (whale) by a righteous man possessed of superior strength and judgment. Filmmaker Andrew Cymek’s 2010 film “Medium Raw” takes on the telling of the Red Riding Hood story from the woodcutter’s perspective. It is a novel idea; one that to my recollection I haven’t seen before, at least not in film form.

When Johnny Morgan was a young boy he witnessed his sister’s murder at the hands of a heavily armored serial child killer known as “The Big Bad Wolf’. Years later Detective Johnny Morgan (read woodcutter) tracks down and apprehends the killer, one Harold Grierson. Grierson escapes the death penalty, being sentenced instead to lifetime Institutionalization. As luck would have it Johnny’s estranged wife Jamie works as a psychologist at the dank, subterranean asylum where Grierson is set to spend the rest of his life under the care of the suspiciously arrogant Dr. Robert Parker.

Johnny and a cohort use Jamie’s stolen password to access the asylum so that the woodcutter can serve a darker form of justice upon the Wolf than that which courts deemed appropriate. That same night a nurse brings in her virtually mute granddaughter Sabrina to work (wearing a red hoodie) to talk with Jamie hoping that she can help the girl overcome the trauma of losing her mother. Of course, what can go wrong does; a power outage unleashes a half dozen dangerous crazies in the underground, the Wolf hunts Sabrina, certain characters turn out to be quite a bit more dastardly than they first appeared and Johnny gets a shot at redemption.

I like the idea of retelling the fable from an unexpected perspective. There are also some nice bits of violence here and William B. Davis brings some much needed subtlety to the role of the smug doctor. That is everything that I liked about “Medium Raw”.

What I don’t like about “Medium Raw” is that while the narrative is clearly handled with a fairy tale tone there is a heavy-handed Christian morality running down the middle of the film. The woodcutter metaphor is fine and giving Johnny Morgan (I think I just cut myself on the bland psuedo-edginess of that character name) a through personal darkness-to-redemption character arc is not an uncommon horror strategy. It only starts to stink like a heavily agendized message movie when you add in the other details such as the prominent line about Johnny finding Jesus, and the way he makes an issue of Jamie not wearing her wedding ring; the fact that he gets inordinately vexed when a false prophet calls him a sinner and the recurring 6ft. crucifix in the asylum’s (improbable) centrally located chapel. I’ll be the first to admit that I am heavily biased against films that push religious tenets with any degree of discernable fervor, but that doesn’t mean that a talented writer and filmmaker can’t pull off a spiritual horror film. Bruce Joel Rubin and Adrian Lyne managed to make a deeply frightening and spiritual film with “Jacob’s Ladder”. Carl Theodore Dreyer’s “Vampyr”, Friedkin’s “The Exorcist”, “The Sentinel” , “The Omen” and to a lesser degree the Buddhist anti-suicide movie “Demon Warriors” have all managed to keep their religious ideals from overtaking the universally relatable horror elements.

What may be more offensive than the religiosity of “Medium Raw” is that Andrew Cymek seems unaware that when the audience can discern one moral message they will look for more, often in elements that may just be simple story points .Either that or Cymek does has some radical socipolitical judgments he is deliberately trying to advance with this film. A semi-casual examination of the story content might leave you with the impression that writer, director, editor, actor Cymek wants to take issue with strong women, lawyers, psychology, and certain sexual proclivities. If I am giving him the benefit of the doubt I'd say this is just a case of a one man band needing an outside perspective to more adeptly balance his elements.

Whatever the motivations, the execution takes an interesting idea and drowns it in homiletic messages and superfluous detail. Add to this, unending stock horror visuals, bad pacing, sloppy writing, poor shot selection, bland characterization and unjustified, unfunny, ill-time black comedy segments and you have a movie that doesn’t even momentarily rise to the promise of it’s core idea. As a woodcutter (read: writer, director, editor, actor) on “Medium Raw” Andrew Cymek buries his axe in soft ground over and again before finally planting it squarely in his own foot.