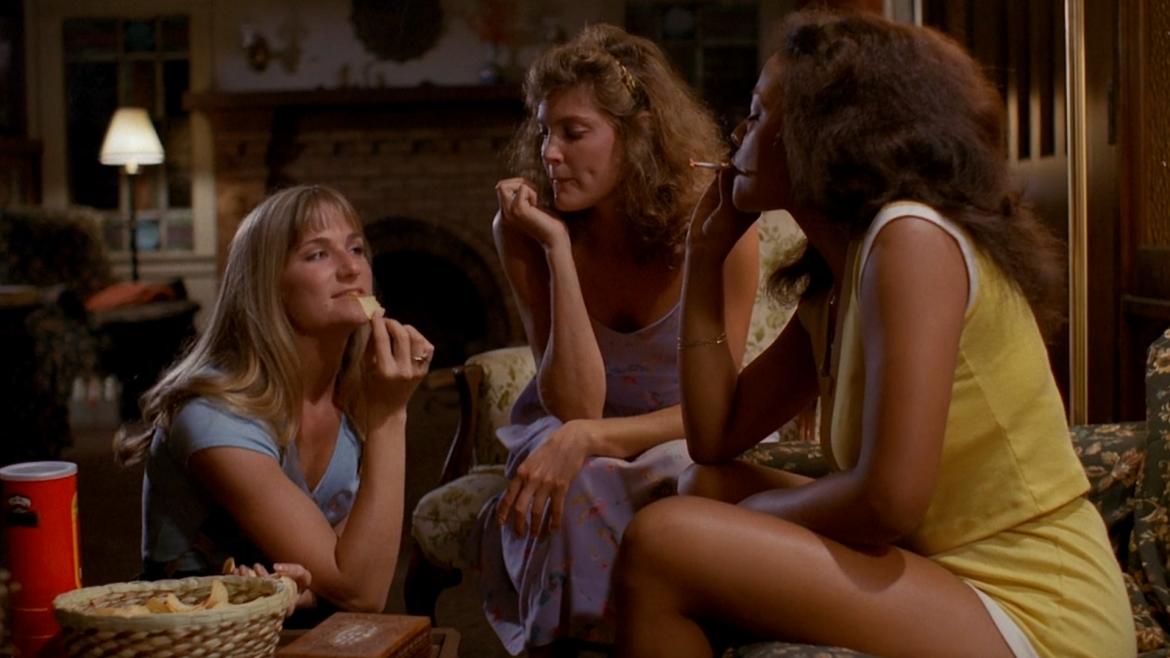 The Slumber Party Massacre is a campy onion of a movie born from the early 80s slasher boon ushered in by the likes of the Friday the 13th series. Don’t think onion in terms of cartoon stink lines, but rather in the Shrek usage. See, The Slumber Party Massacre, much like onions and ogres, has layers. Hidden under the purposefully evocative title, the ample, lingering nudity, and the plentiful gore is honest to god subtext, something lacking in many of its genre kin.

Doubts may arise as to the existence of that subtext when, barely a moment into the film, we see Trish (Michelle Michaels) topless, but it’s there. Just power through the routine plot setup wherein Trish’s parents are heading out of town, she’s booked a slumber party, and there’s a maniacal, drill-wielding killer on the loose. Stick with us despite the protracted shower and locker room sequence following a girls’ varsity basketball practice. Once the killer descends upon Trish’s slumber party and the bodies begin piling up, it becomes easier to identify the layers of that onion/ogre. Watching a girl unapologetically eat pizza off the mutilated body of a delivery guy will do that.

Written by feminist activist Rita Mae Brown, The Slumber Party Massacre was originally intended as a horror parody. The finished film, directed by another female (Amy Holden Jones), plays things a little straighter but the result is still a blend of horror and humor. It’s hard to say how much of that over-the-top nudity is an attempt by these two women to satirize the genre’s love affair with it or if it’s simply the product of working with exploitation icon Roger Corman, who produced. What’s not open to debate is the clear and abundant phallic symbolism surrounding the killer and his murderous power drill, particularly in light of his ridiculously pained reaction when it is halved by a machete. Also not debatable is that The Slumber Party Massacre isn’t a good look for men. Across the board, men are portrayed as murderers, creeps, or both. Let’s consider the two leering high school wierdos who crash the girls’ slumber party. These two talk a huge game but, when facing possible death, their heroic plan is, essentially, to run away. The ladies aren’t just surviving here, they’re doing everything. На сайте собраны Лучшие онлайн казино со всего мира

Getting past its sophomoric surface is no small feat, however, what waits below is one of the more entertaining and engaging slashers of its era. Unfortunately, the film’s greatest shortcoming is arguably in its most important area: its killer, who is as bland as the Canadian tuxedo he wears. It should come as no surprise, given the rest of the movie, that The Slumber Party Massacre would ultimately be let down by a dude.