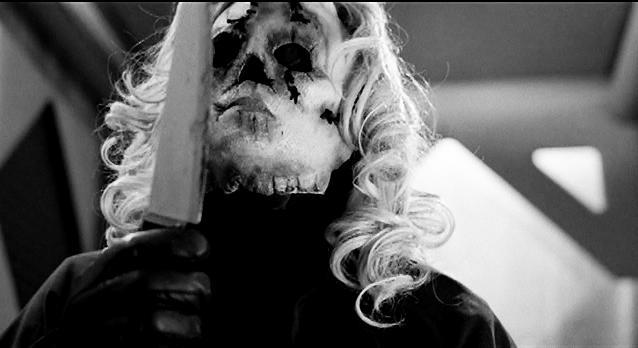 When you find yourself sifting through stacks of low budget independent features, you tend to find some common similarities throughout. A spark of a good idea, a lot of ambition, and a healthy love of the genre. Typically, these movies tend to not extend very far past these tenants; and are quickly hampered by low budget, lack of experience and sub par acting. At first glance, "Dark Reel" appears to be one of those films.

"Dark Reel" is about a young horror fan who lands a role in a feature film, won by mail-in contest. When he arrives to work however he soon finds that working in B-Movies is not as glamorous as he thinks. As events unfold and cast members begin to turn up dead, all eyes turn to him, since he's the odd man out on set.

The movie has a solid idea, the spark of something original. It has ambition as well. Where "Dark Reel" manages to beat the B movie cliche is in the acting department. The film packs an all star B-Movie cast of veterans. With genre stalwarts like Tiffany Shepis, Lance Henriksen, Tony Todd, Edward Furlong and Alexander Holden, the film packs a great deal of horror experience into its cast. This alone was enough to pique my interest. However, star power is not the only way to make a good horror movie. You need a decent story and you need some decent direction, and "Dark Reel" managed to prove itself enjoyable in this respect as well, despite not being blockbuster quality.

As the story unfolds, we're initially given a taste of the 'real life events' that the movie is purported to be based on. In the 1930's, a no name starlet is led off to what she believes to be a screen test, only to be brutally murdered and mutilated. Shot in black and white, it is by far the most artistic attempt at film making contained within and does a good job of grabbing the viewer's attention. While there is no real data to back up their claims of the Scarlett May murder being in fact real, it's still a solid plot point, even though they don't really bother to tie it into the rest of the film.

As we jump to modern day and join Eddie Furlong on his adventures in movie making, the story takes a turn and starts to take itself less seriously and dives headfirst into camp-slasher fare. Bad jokes and pokes at real life genre names rule the day, while a slasher killer makes his way through the cast. While it's pretty standard stuff, the slasher's back story proves to be solid and they do a good job of planting enough red herrings to keep you guessing on who the killer is.

Since he's decked out in a flesh mask and wig of the late Scarlett May, complete with a black cape, you make the loose connections back to the intro story pretty quickly. It's when you start to notice the small touches that the writing stands out though. Lance Henriksen's character is an obvious nod to Lloyd Kauffman and his legendary low budget take on filmmaking. Tony Todd shows up as your standard L.A. homicide detective who spews cliche one liners throughout, all while making you feel a bit embarrassed because of the intentional awkwardness.

While Edward Furlong is mostly forgettable and entirely dead pan in his performance, his relationship with co-star "Cassie Blue" manages to pull his time on screen from the depths of groanville. Tiffany Shepis shows her chops here and makes herself shine far and above the rest of the cast. While given her own share of bad jokes and cheesy "50's girl" wardrobe, she still manages to be both adorable, watchable and dare I say... alluring. It's a shame she had to film a sex scene with Furlong. Nobody deserves that!

While enjoyable overall, "Dark Reel" does have some sticking points. The biggest problem in the film is a slow pace that is stretched too thin in parts, making the movie feel slow and slightly clumsy. Even some of our big name stars manage to feel awkward and forced at times leaving the viewer hoping that they hurry up and move past the moment. There is a lengthy scene between Lance Henriksen and Tony Todd that feels five minutes too long and slightly embarrassing. It's obvious that the director just yelled "action", without giving the two genre vets any real direction for the scene.

While some of the jokes that are sprinkled throughout the movie are chuckle-worthy, they also managed to shoe horn them in time and again and drive them into the ground. Bad jokes are always fun, but generally only the first time around. Finally, where the filmmakers spent a great deal of time and care setting up the back story and scene of the Scarlett May murder, they fail to integrate it very well once they jump to modern day. Ms. May makes a return later in the story, but feels shoehorned in as if they realized they forgot to tie her in.

Despite its flaws, "Dark Reel" manages to be that pretty enjoyable indie flick that you've probably never heard of. With a strong cast and Tiffany Shepis to prop up the flawed story, its easy to make it through to the end. I was left with a feeling that the movie smacked of such Hollywood thrillers as "The Black Dahlia" or "L.A. Confidential", only if they were directed by Lloyd Kaufman, with a bigger budget and fewer poop jokes.