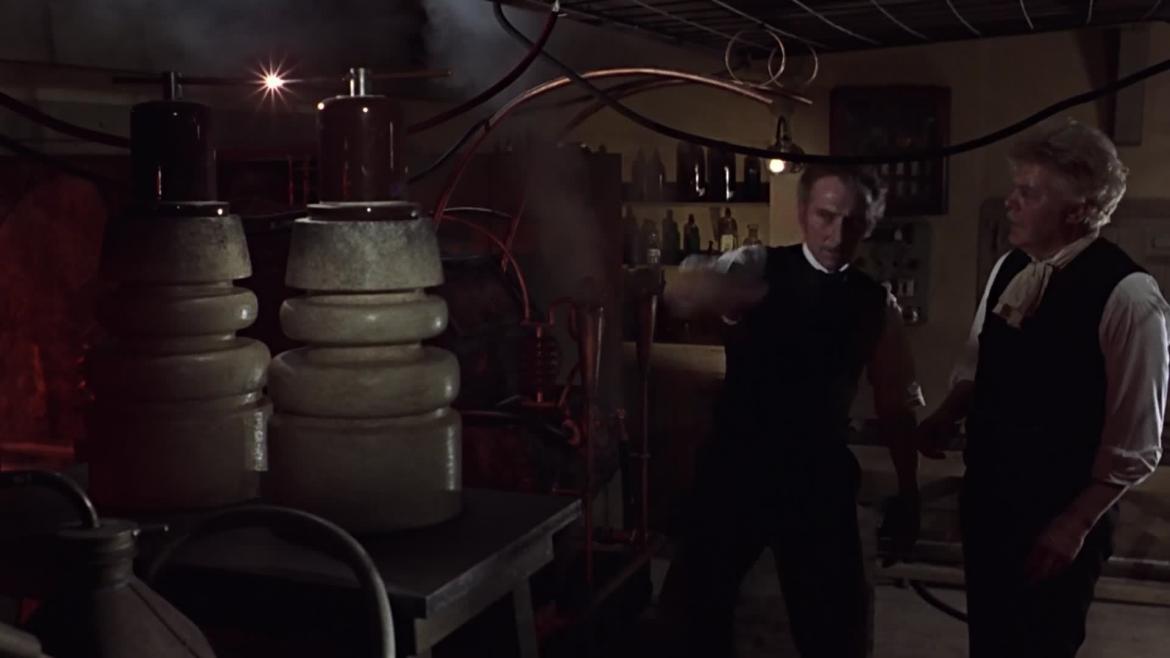 From Monsters to Brides, Sons and Ghosts, Blackensteins and Frankenweenies, just about anything can be Franke-fied. Scold all you want about Shelley’s source material--which was yes, great, and no, doesn’t have much to do with the movies in question--Frankenstein became a monstrously huge Hollywood myth in its own right precisely because of the license it took. There’s no unified Frankentheory that can tie together every outlandish title that lurched under that banner, but Frankenstein Created Woman shares some familiar anxieties about hubris and death, all with the gothic softcore lustiness that made 1960s Hammer Films so iconic.

The plot is a doozy, almost self-consciously novelistic, and I still can’t decide if its many pieces are more help or hindrance. In a prologue, we see a wildly violent criminal guillotined in front of his only son, Hans. Decades later, Hans is the assistant for one Baron Frankenstein and his partner, the drunken Dr. Hertz (we know that it’s Hans because the strapping thirty-something has changed neither his haircut nor his outfit since he was a nine-year-old). Frankenstein has instructed Hertz to kill and then resurrect him as part of his research on capturing the human soul, and when the experiment is successful, the trio heads to a local tavern to celebrate.

From there, a secret affair between Hans and Christina, the proprietor’s disfigured daughter, collides with local hoodlums Karl, Johann, and Anton, and Hans is eventually framed for the murder of Christina’s father. He’s executed after a lengthy, slanderous trial, she tragically commits suicide, and Baron Frankenstein celebrates his good fortune by (in theory) putting Hans’s soul into Christina’s “healed” body. From there, Hans-Christina sets off to seek revenge on the trio of men who actually killed her father and got away scot-free.

Frankenstein Created Woman is a promising, frustrating b-movie full of paradoxes. The premise is salacious, but the filmmakers are obviously too squeamish about the idea of placing a vengeful man’s soul in a beautiful woman’s body to fulfill its potential. They get sloppy with the rules, and for all the talk of ‘containment,’ it remains questionable if Hans’s identity is really in Christina’s body. Eventually it’s externalized into his decapitated head, which “Christina” carts around in a hatbox and speaks to, and sometimes for. While this is excusable given the era, what genre other than horror was better equipped to slip subversive anxieties and desires past the censors--not to mention the reservations of a more conservative audience?

The murders themselves are also committed offscreen, and quickly, a jarring afterthought in a movie that, half an hour earlier, couldn’t get enough of unneeded detail. Even here you have to give the movie credit--it’s a deliberate choice, and the deaths are alluded to with an unsettling playfulness that may actually be referencing its own inability to explore the Hans-Christina implications with the directness it deserves.

First timers to Hammer Horror may want to look elsewhere, but if you’re already a fan you’ll find something to love in Frankenstein Created Woman (if you haven’t seen it already). The end result is a strangely subdued, sexual, and nearly bloodless horror movie that pushes boundaries while simultaneously waving red flags about exactly where those boundaries are.