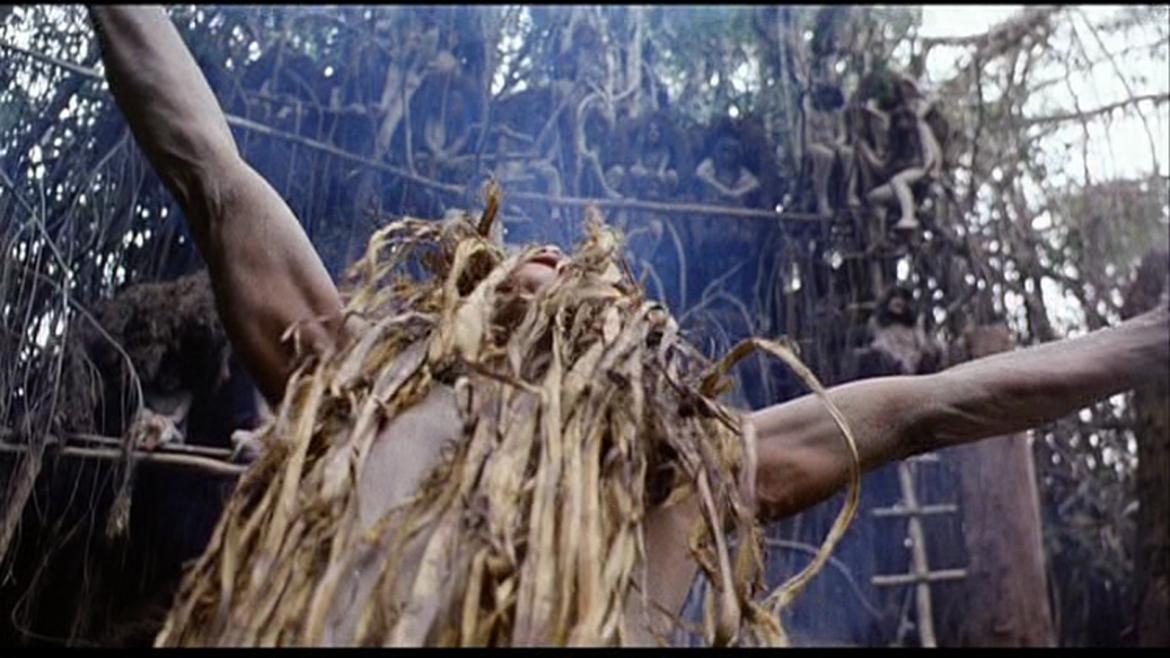 The only thing more shocking to me after having just watched "Cannibal Holocaust" than the images contained within has got to be how damn good the movie actually is, even almost 30 years after it's original release. Ruggero Deodato, the man responsible for this film, has refused to state that he was actually trying to make some type of social commentary when he directed it back in 1979. I find this fact incredibly puzzling, mainly because I picked up an undeniably strong social message without having any prior awareness that there was one. Which begs the question, even if you didn't mean to do it, why not take credit for it?

There are two distinct halves to "Cannibal Holocaust." In the beginning we are introduced to 4 cocky documentary filmmakers as they venture out into the Amazon jungle in search of the 3 native cannibal tribes which reside there. We quickly learn that they never returned, and are introduced to Professor Malone, an anthropologist about to set out on his own trip into the jungle to try and find out what has happened to the missing crew. The first 45 minutes follow the professor and his two guides as they search for the missing foursome. The professor seems to have a naive reverence towards the cannibals, and by using this to his advantage is able to gain their trust. It is only then that they reveal to him his prize... the crew's film canisters. This is where things get interesting.

The second half of the film plays out like a psuedo-documentary that is incredibly realistic. In fact, I was shocked to see how much of this film seems to have been "borrowed" for "The Blair Witch Project" (whether the makers want to admit it or not). Back in the comfort of the city, Malone sits down with some television execs to pour over the footage and find out what happened. What they find is more than they had bargained for.

As it turns out, the filmmakers, notorious for "staging" events for sensationalism's sake, wreaked havoc on the small native population. In one particularly frightening scene, they waltz right into a village, shoot off their guns, kill natives, and proceed to torch the entire place. This is after a startlingly realistic sex scene performed right in-front of the cannibals by 2 of the filmmakers.

This second half is also where most of the notorious "animal cruelty" takes place. While I'm not sure I found these scenes as physically disturbing as some people have (you eat meat don't you? It has to be killed at some point) I will say that it is some of the most shocking stuff I have ever seen on celluloid. One scene in particular disgusted me the most, where the camera crew catches a giant turtle, cuts off it's head and proceeds to eviscerate it. In all fairness, the fictional crew do cook and eat the turtle... if that offers you any solace.

What happens next is the catalyst for the ending. In a particularly mean spirited and brutal sequence, the four crew members (who we have now grown to despise) commit a heinous rape on a young indigenous girl while she lies in the mud (filming every second). Each one takes turns with the girl, except for the one female crew member, who does actually seem disturbed (although strangely, not all that surprised). Little do the unsuspecting crew know however, that another member of the tribe was taking note of their crimes.

As far as shot composition, the last 20 minutes or so play out almost exactly like "The Blair Witch Project", right down to the final shot of a man lying on the ground. While I can't imagine anyone actually thinking the events of this movie were "real" back in the day, I am astonished to admit that I could absolutely see, after watching the cannibals do away with the crew members one by one, that some people thought this was a real "snuff" film (aka a movie in which the actors were actually killed). In my opinion, this final scene reached near brilliant heights. Terrifying the audience and showing us special effects that I could not discern as being fake. I was so affected that I actually sat in silence and watched the entire credit sequence with my hand over my mouth.

To my shock, the only thing rivaling the imagery here is Deodato's direction. The second half in particular, with it's cinema verite style is breath taking. Never for a moment does he allow you to step away from the conceit that what you are watching is entirely real. The whole thing is accented by a pitch perfect score from Italian composer Riz Ortolani. The music is all over the place but the main theme, a strangely melodic and peaceful tune, sets the stage for a truly bizarre movie directed by what I can only guess is a truly bizarre man.

Although he denies that these were his intentions, Cannibal Holocaust comes with a heavy message for anyone daring to give it a watch. It forces you to make a choice, to decide out of all of the people you are watching, who is really the savage? Is it the jungle-dweller, simply living by his cultural beliefs that go back thousands of years? Or is it the white man, eager to have his "senses raped" (a term used in the movie), and willing to desecrate a culture at the drop of a hat in order to do it? Not to mention the fact that by merely watching the film, you have become a willing participant in what the writers are clearly condemning as voyeuristic savagery.

Today, Deodato is understandably very repentant and uncomfortable with the animal cruelty played out in the film. While I understand (the man got in ALOT of trouble over this movie) I can't say that I feel the same way. Horror is a transgressive art form. Sometimes in order to affect your audience and get a truly radical point of view across, you have to "rape their senses." It's what knocks them out of their safety net and gets them thinking in radical and profound ways.

I never thought I would say this, but I consider "Cannibal Holocaust" a profound work of art, and one that should not be missed by anyone who considers themselves a student of the horror genre.