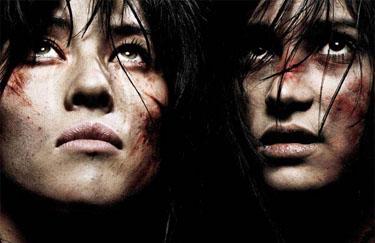 Fairly or not, when future horror historians look back on this decade there's going to be a lot of discussion of “torture porn”. The label may or may not be fair, but there is no denying that the themes of torture, sadism and captivity have been touched on by many horror films of the 2000s. The problem with most of these films is that while ostensibly the filmmakers are condemning the acts it's apparent that the audience is supposed to wallow in delight at the splatter and desperation, and sometimes are even meant to identify more with the torturer than the victim. This lack of focus gives ammo to the detractors when they try to demote horror from the ranks of “quality” films and recast the genre as a kind of pornography with no redeeming factors, capable only of delivering cheap, amoral titillation.

In these films, graphic violence is portrayed as horrible and deplorable as it is in real life. Even though revenge is a major part of the film, there's no point in “Martyrs” where we ever see someone “get what they deserve”. The film could almost be accused of torturing the audience in its refusal to give them the easy outs and straightforward plot they've come to expect from films. If the audience is open-minded and strong-willed enough to go along with “Martyrs”, they'll find a movie that is possibly the best of the recent spate of high quality horror films coming out of France.

The first image of the film sets the tone of relentless dread that the rest follows through on. A girl of about 11, bruised and bloody, head roughly shaved, wearing nothing but a soiled t-shirt and underwear, bursts through the door of an abandoned factory and runs, sobbing in real terror. Through footage of a research team who later investigated the factory we learn that the girl, Lucie, was kept chained by the wrists to a chair/toilet with a hole in the seat and was generally abused, though not raped. Lucie is sent to an orphanage where a kind-hearted girl named Anna takes her under her wing. Surviving such a harrowing experience has left Lucie scarred and damaged. When she is alone she is frequently tormented by the image of a skeletal naked woman who attacks her and leaves her cut and bleeding.

At this point the film jumps 15 years ahead and we are introduced to an average, suburban family having breakfast. The doorbell rings, the father goes to answer it and is greeted at the door by Lucie with a shotgun. We soon learn that Lucie and Anna have cooked up a plan for revenge that has gone horribly awry. The twists and turns the movie takes make it hard to describe in detail anything past the first 10 minutes without spoiling the film for those who haven't seen it. Suffice it to say, there were at least three points where I thought I knew what kind of movie I was watching and how the rest of it was going to play out, when the film suddenly switched gears and turned into something completely different. In fact, much of the movie leaves the viewer in a constant state of trying to figure what exactly is going on. “Martyrs” plays like a puzzle, where each piece falls into place just in time for the viewer to notice the next piece that's missing. The pacing is near perfect and there's not a minute of wasted time in the movie.

The gradual unfolding of the plot takes what could easily have been a hacky story and tells it in a way that, by the end of the movie, could almost be described as oddly beautiful and uplifting. The final image of the movie simultaneously recalls “Hellraiser”, “Altered States” and paintings of early Christian martyrs, three sources that don't fit together in an immediately obvious way but are ingeniously blended in this movie. “Martyrs” covers a lot of ground and is at once a dark love story, a tragedy, a science fiction fantasy, a revenge flick, a speculation on religion, and yes, a horror film that fetishizes torture more than any other film in recent history, but in a completely different way that could never be considered “porn”. If at any point during the film you think you've figured out what “Martyrs” is all about, keep doubting.