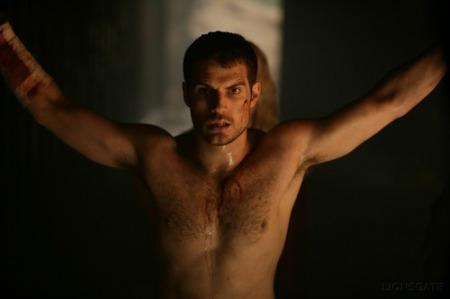 Try as I might, I doubt I'll ever fully comprehend Lions Gate Entertainment's business philosophy. The gaggle of marketing geniuses working behind-the-scenes are ready and willing to thoroughly promote some of the worst genre pictures to ever grace this miserable excuse for a planet, leaving their stronger acquisitions to flounder and disappear within the bottomless pit of the direct-to-video graveyard.

Granted, not every Lions Gate release is a cinematic bomb, but the vast majority of their more popular titles pale in comparison to the films that, for whatever reason, failed to garner support from those in charge of such decisions. It makes you wonder if they understand horror at all.

Director Joel Schumacher's insanely underrated action/horror hybrid "Blood Creek" (aka "Town Creek") is another unfortunate title that has been mistreated and neglected by one of the most opportunistic studios operating today. Everything about the picture is lean, mean, and bloody, punctuated by one of the most threatening horror villains to grace my television in years. Sadly, "Blood Creek" arrives on DVD without a lot of fanfare, a fact which perplexes me to brink of white-knuckled frustration. Is originality such a four-letter word that anything creative, inventive, or imaginative is immediately moved to the bottom of the totem pole? It’s the only theory that makes any sense.

Powered by a script from up-and-coming scribe David Kajganich (“The Invasion“), “Blood Creek” utilizes Adolph Hitler’s obsession with the occult as a backbone for a strong and supremely creepy story. In the months before World War II, the Nazis have become enamored with several mysterious Viking runestones that have been unearthed along the eastern edge of the United States. Sent to investigate these potentially dangerous relics is a German historian who secretly understands the magnitude of their power, though he's not exactly offering up any specifics to the kind rural family who have agreed to provide the creepy bastard with room and board for the duration of his stay.

Decades later, the horror wrought by the Nazis insatiable desire for world domination has forced two estranged brothers (Dominic Purcell and Henry Cavill) to embark on an impromptu mission to stop a reclusive family from abducting anyone who wanders too close to their property. What these trigger-happy siblings don’t know, of course, is that the Germans were nearly successful in harnessing the power locked inside the rune stone, and the monster created by this unspeakable evil is now on the loose. If this unstoppable killing machine is able to consume enough blood before the looming lunar eclipse, his third eye will pop open and the world as we know it will come to an end. Nifty.

Although the central premise exudes hokeyness and the storyline is more than a little hard to swallow, Schumacher’s breathless pacing and the Lovecraftian nature of Kajganich’s intelligent script helps soothe and cool the film’s goofier aspects. As slick, professional, and well-crafted as it may be, “Blood Creek” is, essentially, a B-grade action flick dressed up in glossy production values. It has the air of a serious-minded grindhouse comic book, where the plot is ludicrous and the characters are paper thin and the action is beyond gory. However, the true beauty of the feature lies in its violent simplicity.

Dominic Purcell, an actor I've never been too crazy about, gives an impressively intense performance, as does his square-jawed on-screen brother Henry Cavill. Their tumultuous relationship makes sense despite the somewhat limited amount of characterization we’re given. And while the somewhat misguided approach to their mutual problem is more than a little empty-headed, you really can’t blame the guys for acting on a knee-jerk reaction given the circumstances. Had this relationship faltered in the slightest, the picture may not have worked as well as it does.

“Blood Creek” is sure to be a cult item once it brutally worms its way into the horror community’s meaty vernacular. It’s hard to fault a movie that features demonic Nazis, resurrected animals, an assortment of blood-soaked kills, and a grotesque villain that would make Pinhead quiver in his leathery garb. Shame on the confused folks at Lions Gate for not giving Joel Schumacher’s decidedly savage little gem a leg to stand on. It outclasses the vast majority of their dodgy DTV output, and, in my opinion, should have had a healthy theatrical run with an appropriate amount of promotion. In a world saturated in cheap, second-rate horror pictures, “Blood Creek” is the real deal. Invite it lovingly into your home.